The industry has been talking a lot about using virtual sets recently and for good reasons. Most of the attention has surrounded The Mandalorian, Disney +’s $120 million flagship show. While they’ve certainly pioneered the field and brought it the attention it deserves, a lot of projects don’t have Disney’s production money for their projects. With that being said, designing and utilizing virtual sets is not reserved for the flagship studio projects. Every independent filmmaker should be looking at how they can use this tool to their advantage as there are several scenarios where it can be helpful.

Before a virtual set is used in a production it first has to be designed. The most careful considerations in this aspect are time, knowledge and the scheduling of the two. Virtual set usage as we’re talking about it often requires an LED wall or another external video source for the virtual set to be manifested. This screen (as we’ll be calling it forward) can either be displaying a stock, pre-made asset or a custom one. If custom, this means scheduling and iterating its creation before principal photography begins. It also means scheduling time for the Camera Dep. to become acquainted with the screen’s specs and plan how they have to configure the camera rig’s settings. Finally, it means planning EXACTLY which shots will be using the virtual set and which are simply on the same set. 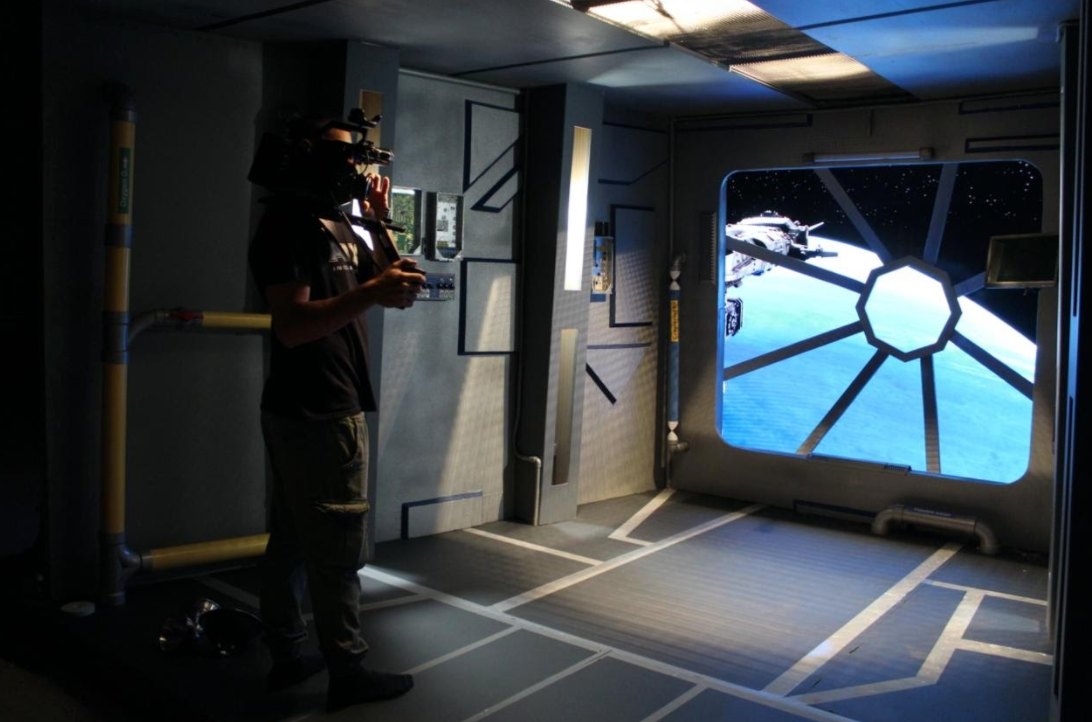 That last distinction may sound arbitrary, but it isn’t. We filmed a feature where, after a change in talent schedules, we needed a shot of a location before we had access to it. Luckily, we had some previously acquired test footage that we could put on our LED wall in our soundstage. With a few extra hours of set prep, and some shifting of the shooting schedule, we were able to setup the location in a soundstage for talent to film in before they had to leave and before we got our actual location. We were very lucky to have a Camera team and a Set Construction team that knew how to work with the screen very well, otherwise the turnaround would never have been this fast. But because we know what parts of the location and the shot were physical and which were not, we were able to make it work.

It can go even smoother when it is carefully planned. By planning which shots were going to use virtual sets at the start of our productions, we’ve been able to consolidate locations and plan very efficient shoots. We’ve implemented them into our main productions schedules and have recommended them to clients whenever it fits their projects.

So how can other production companies utilize these benefits? We have some tips in that regard. The first one is to shift one’s mindset. Like previously stated, a lot of filmmakers still view virtual sets as a luxury for big-budget projects and that simply isn’t the case. While bigger projects can use the cutting-edge tools and experimental techniques, like any tool or technique, there’s a version for every craftsman. Being able to use these tools and techniques starts by asking “how can I do something like this in my shoot” rather than “what budget range do I need to work with these tools.”

Speaking of the tools and techniques, the next tip is to learn as much as possible about them. When it comes to tools, the main hardware being deployed is LED screens. Sizes vary depending on the needs of the production, but they can be as small as a television or as large as the ones used in The Mandalorian. Each of them will have different refresh rates, screen pitches and brightness configurations, all of which matters when trying to make the virtual image look correctly on the camera. If you know what size or type of screen will be best for your production, start looking at these specs at the very least. Knowing how to calibrate these displays to match the camera rig is crucial for the virtual set to work as an illusion.

As for techniques, we come to one that every production company should be doing: sharing their stories. This is an ever-expanding field in filmmaking, one that is going to become an even bigger part of all of our workflows going forward. The more we share proven techniques case studies and anecdotes like this, the faster we can improve our craft and tell our stories the best ways they can be told. Despite what big-budget Studio productions may lead us to think, art is not a winter-takes-all game; as long as we make sure to adapt to our environments, we can all thrive in the new normal of content production.

Dolphin Image Studios is a film production company based out of Winter Haven, Florida. Built on the historic Patterson Studios, Dolphin Image Studios believes in combining the tried-and-true methods of filmmaking with modern conveniences. Their goal is to make Florida an entertainment production hub for the benefit of all. For more information on how they are accomplishing this, visit their website www.dolphinimagestudios.com.