The Cinematography Behind Anticipated Tribeca Film ‘Dating and New York’


Maria Rusche is known for her work in Emma Seligman’s feature debut Shiva Baby (SXSW 2020 & TIFF 2020) which had its theatrical release in April 2021, as well as Season 2 of the hit Showtime series Couples Therapy. Most recently, she shot the upcoming Tribeca film, Dating and New York.

Dating and New York follows two single millennials who meet on a dating app and after a one-night stand, the magic of New York brings them back together, and they draw up a “Best Friends with Benefits” contract to avoid the pitfalls of a relationship. The comedic movie is fun and heartwarming and is highly anticipated at Tribeca, released June 13th. The film is also set for a theatrical release in September.

For Maria, movies are a way of organizing and creating meaning out of a world that feels messy and random, and cinematography in particular creates purpose through composition, color, what’s included in the frame and what isn’t. 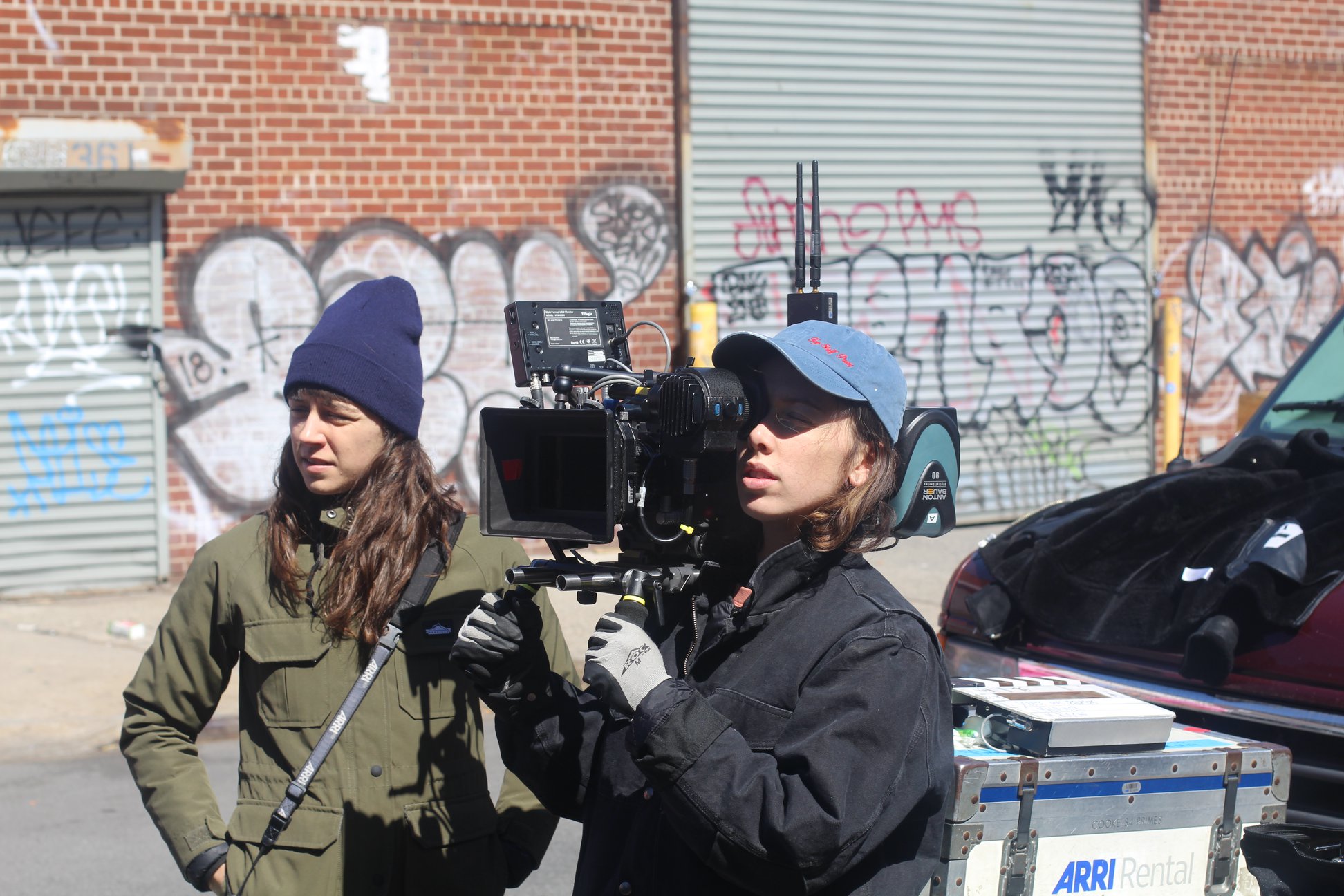 We talked to Maria about her extensive career in cinematography, including her work on Shiva Baby, Couples Therapy and Dating and New York!

PH: Hi Maria, how are you? How has work looked for you the past year or so?

Work has definitely been strange in the past year. Luckily I was just starting season 2 of a show called Couples Therapy when the lockdown started, so we kept all our gear on the stage and were able to walk back onto set Fall 2020 and continue to shoot in a way that felt fairly safe— each camera operator is in their own sort of secluded area, and everyone was able to keep a reasonable amount of distance. Otherwise, I’ve been picky about only taking work that had proper safety protocol since I didn’t want to bring crew onto a job that isn’t run safely.

PH: How did you get into cinematography? Did you always know this is what you wanted to do?

Maria Rusche: I started making short movies with my friends on my family’s DV camera when I was a kid, they were always comedies or sometimes mockumentary. I went to film school thinking maybe I wanted to be an editor but when I started learning more about the process of filmmaking, I learned about what a cinematographer does. They’re integral to creating the world of the story with the Director and Production Designer and then they work closely with a team of people to actualize that vision. As someone who grew up playing team sports, that was a role I fit into really well. 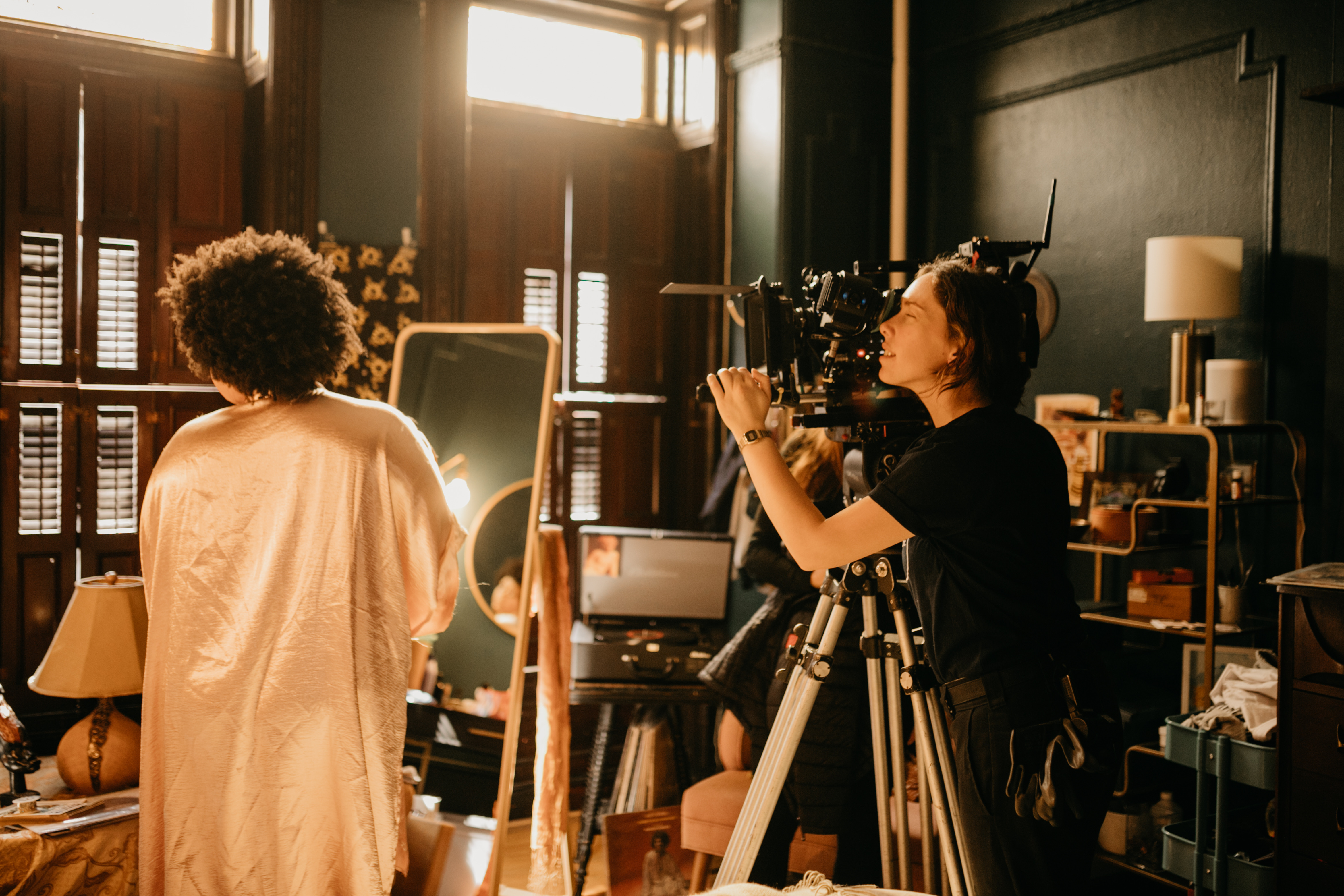 PH: Can you talk about some of your recent projects including Shiva Baby and Couples Therapy?

Maria Rusche: Shiva Baby was an amazing project to be involved with because it was a movie I definitely wished I had when I was younger. When I first met with Emma, I watched her short and it was clear she had a vision and perspective and sense of humor that I could really identify with. In our first meeting, I brought some more dramatic visual references that I think resonated with her. We looked at Black Swan for the way they show the protagonist’s perspective of the mounting anxiety and paranoia. Color-wise, Emma was very particular about the warmth in the skin tones because she had noticed over years of watching Jewish films that there tended to be a rosiness in the way the skin tones were photographed, and it was important to her to evoke that. So my gaffer Andrew Naugle and I built a gradual warming into the lighting that builds to Danielle’s breaking point and our colorist Matt Greenberg did a great job at helping us nail the right hue for those glowing warm skin tones.

Maria Rusche: For Couples Therapy, the show is split into therapy work in the office and verite with the couples out in the world. For the therapy sessions, the goal is for the office to be completely immersive for the couples so that they feel comfortable enough to be vulnerable. When they walk in, they don’t see any lights or cameras in the space; it just looks like a regular office, even the lighting matches the time of day outside. We capture the therapy work in quite a formal, composed style, all our cameras are on a tripod or slider so that it doesn’t feel like we’re spying and you don’t feel the presence of the operator. The verite work is often used as a bridge between sessions with the goal being to offer a glimpse into the couples’ lives. Our approach to this portion is more impressionistic since this section offers a chance to reflect on what was discussed in the session.

You also shot the upcoming film, Dating and New York. How did you get involved with this film?

Maria Rusche: Jonah reached out to me about DaNY and we met up in Washington Square park to chat about it. We had a lot of overlapping movie taste including classic rom coms — movies that felt embarrassing to talk about in film school where the only “real films” were dramas. Pre-production involved a lot of rewatching movies like When Harry Met Sally and 500 Days of Summer to figure out how we could blend the structure and joy of romantic comedies with elements of magical realism.

PH: What did your pre-production process look like? How did you envision this project? Did you face any challenges while filming?

Maria Rusche: We definitely wanted to show a romantic version of NYC and for Jonah and myself that had to be the Fall — sweater weather, leaves changing etc. Because of cast availability and our short shooting schedule though, we had to shot in November and the city was already becoming a little gloomy. So there were a few exterior scenes where we had to cheat our coverage a bit to make sure the background was full of golden and orange leaves but in reality, 75% of trees had already shed their leaves. It’s a seemingly small thing, but it helps us build out the world in a way that supports the romantic feeling of the city.

PH: What are some of the skills a cinematographer must possess in order to be successful (in your opinion)?

Maria Rusche: I think a DP must be a great communicator in order to be successful. Before you actually shoot anything, so much of the process of creating the look with the director and production designer is communicating ideas, that obviously happens verbally but also with images, with overhead blocking diagrams etc. And then once you have the ideas, the DP is disseminating that info to many departments including the lighting and camera depts, and that vision needs to be communicated effectively and efficiently in order to be captured within the schedule and budget. 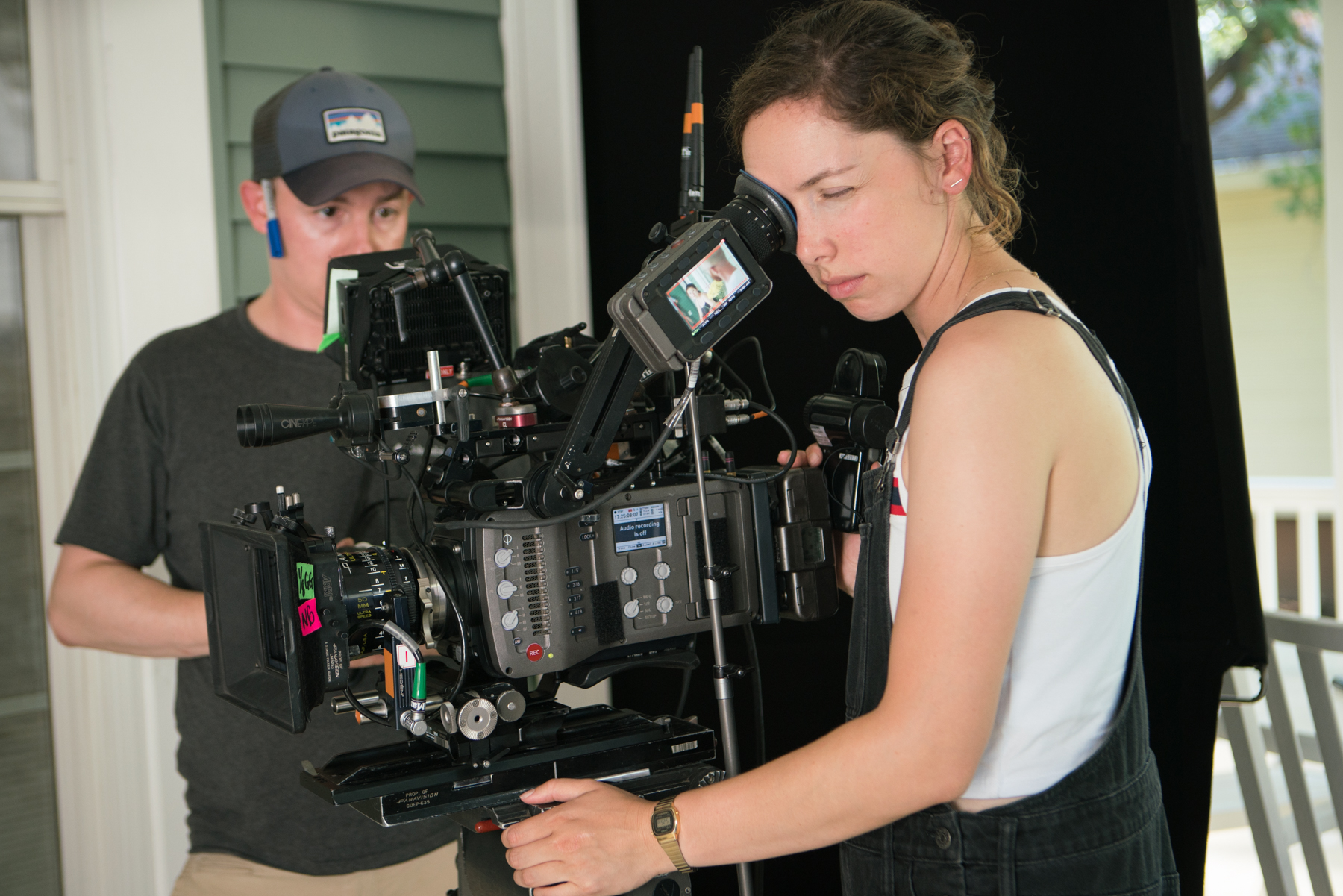 PH: How do you create purpose through composition and color? Can you share some examples from your projects?

Maria Rusche: When making choices about the look of the film, it always starts with an understanding of the story. In the feature Milkwater, a directionless 30 something named Milo agrees to be a surrogate for a gay man, Roger, hoping it will give her some purpose. There’s a scene while she’s pregnant where she and Roger read to the baby and we knew it needed to be a moment of reflection for Milo where we feel some tenderness and hope but also understand some of the loneliness she must feel. We had Milo lay her head in Roger’s lap while he reads and the shot starts tight on Milo and booms up slowly into a wide shot. This helped us isolate Milo somewhat in the frame and then pull out slowly to include Roger, and gives the feeling of Milo receding into her thoughts. 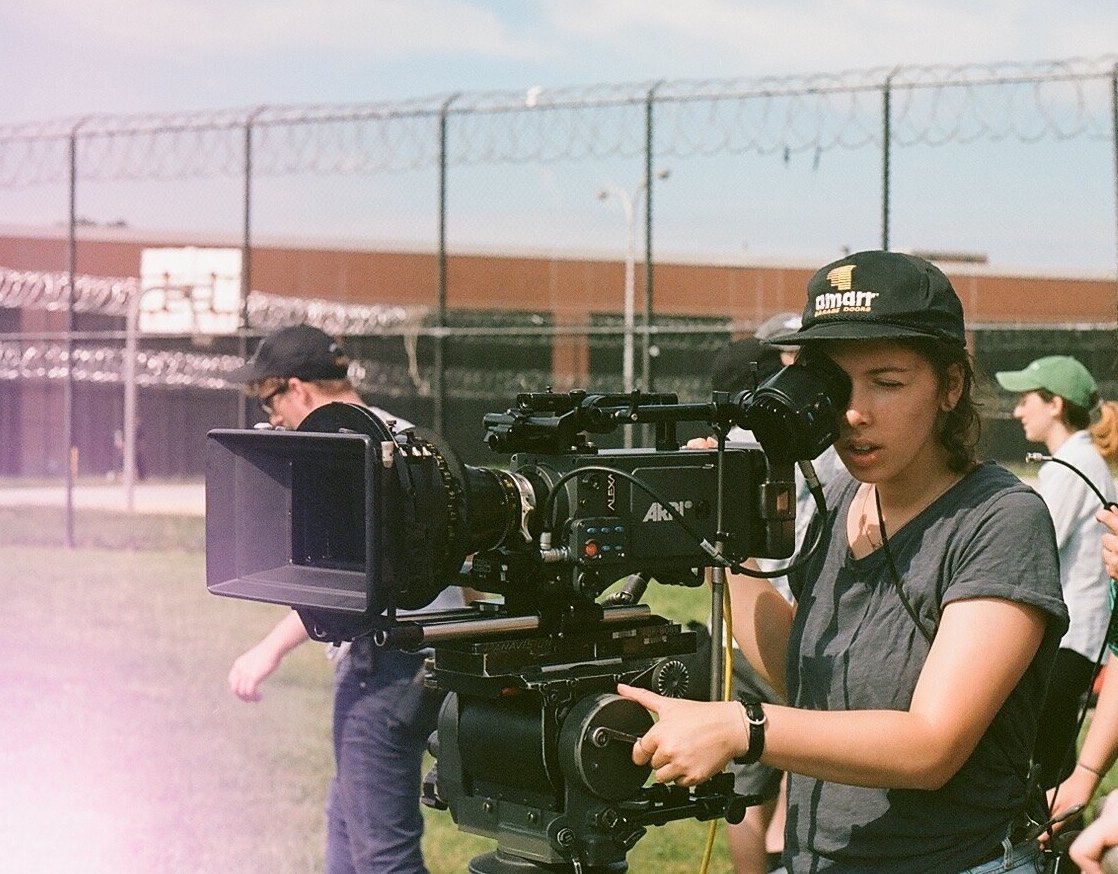 PH: Do you have any go-to shooting equipment? What do you rely on to get the right shot and why?

Maria Rusche: For the most part the lenses and lighting adjust with the needs of the project, but I always carry a 3’ slider. It’s not a very glamorous answer, but I use it on every feature to be able to make small adjustments easily. It’s a huge help when shooting over the shoulder shots so that if the actor isn’t exactly on their mark, I can adjust to make the shot work instead of nitpicking the actor to sit in exactly the perfect position.