In their final “NAB” product release announcement, Aputure pulls out all the stops with two new light fixtures that will change everything.

Today, they’ve really done it. Today they announced something that I’ve been waiting for them to do ever since the original 300d. They’ve released an LED light that truly rivals HMI lighting (and in many ways surpasses it). In my opinion, if these lights do what they say they can, then they will truly usher in a new era of film lighting. 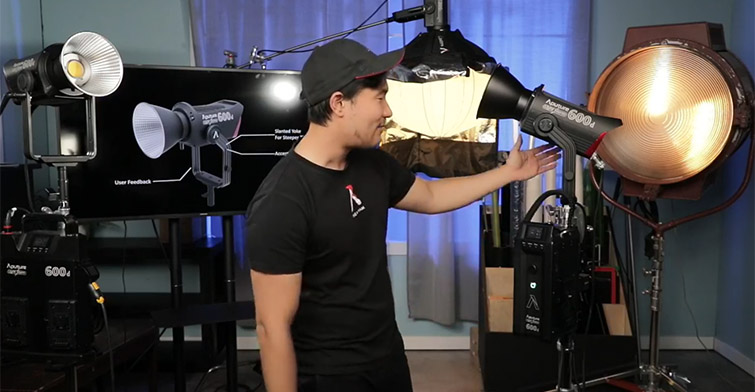 In the livestream, Ted Sim announced the 600d. This light is similar to the rest of the “d” family, a single chip LED fixture that comes with a reflector and packs a ton of punch (a whole lot more on that later). They ALSO announced the release and final details of a light that they’ve been working on for quite some time, and actually announced quite a while back. Both fixtures represent a dedication to professional and independent filmmakers alike, providing tools that are always much more affordable than the competition, but also pack more features and convenience at the same time.

Here’s the low-down on these two lights. 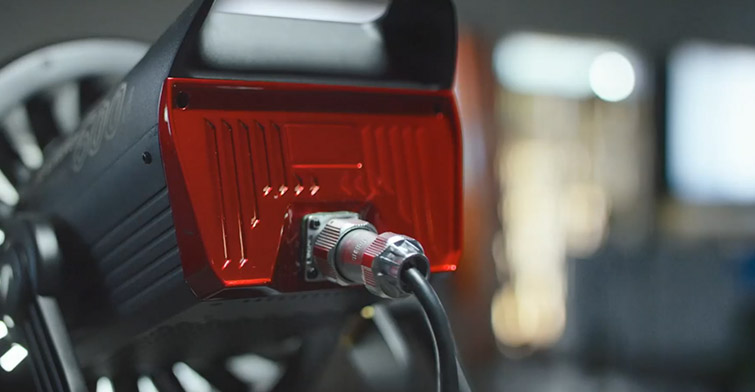 HMI lighting has always been kind of a sore subject for a lot of filmmakers. The bulbs are extremely expensive, the fixtures themselves are next to impossible to justify purchasing for yourself ($5,000 for just a lamp head with no ballast). They also have a lot of limitations as far as what sort of sets can accommodate them, since they have a huge power draw. For the majority of productions, when faced with the option to rent HMI or just use whatever lights you’ve got in your kit, most of the time you’ll choose the latter. It’s just a little easier, especially for productions with minimal crew.

The Output/Power Draw of the 600d 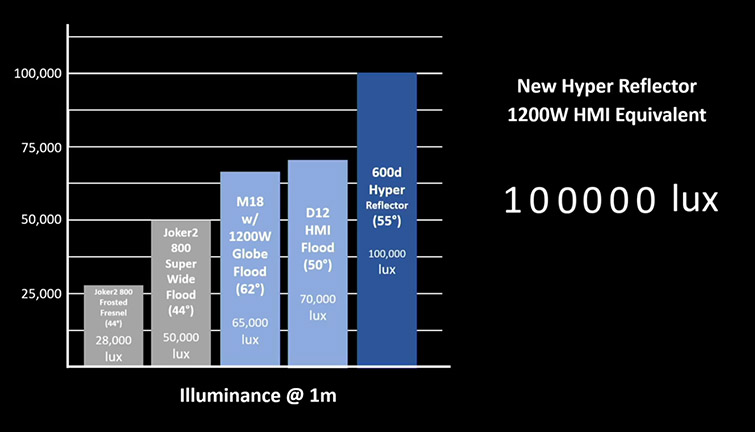 The output of the 600D compared to its competition.

Now do yourself a favor and take a gander at the above chart (captured from Aputure’s live-stream). The 600D is considerably brighter than a M18 with a 1200watt bulb in it. That’s 100,000 lux compared to the 70,000 lux of a D12 HMI. I’m accustomed to renting an M18 on any production that needs a lot of light, as it’s the brightest HMI that a standard household circuit can power. This is one of the biggest considerations about HMI lighting. Go any brighter and you’ll need a generator and a savvy gaffer. That wasn’t always in the cards.

Oh but hey, now you can get an even brighter light — except this one is smaller, self-contained, and draws much less power. Now, lets take a look at the graph below:

The 600d has a max power draw of 720 watts. This means that you can fit THREE of these fixtures on a standard North American circuit (20 amps). So that gives you 300,000 lux without blowing the circuit (since it only pulls 2,160 watts of power draw). Now, with an Arri M18 or 1.2K HMI on the other hand, you probably wouldn’t ever even consider using more than one on that same circuit. Too risky.

Let me remind you, that’s three fixtures on one circuit that are individually brighter than one standard 1.2k HMI. No generators. Oh, also, if you wanted you could use batteries.

Power Options for the 600d

Yeah, that’s right. This fixture runs off of batteries. This device has multiple options for batteries and power usage. You can use four different voltage power sources, or you can choose to run the light at different output levels. And as far as batteries go that’s not all.

Weather Proofing and Other Features

The 600d is IP54 weatherproof. This means that you can leave this light out in the rain without a care in the world, then take it to the desert and drop it into the sand a hundred times and your investment will be no worse for the wear. All connections are weather sealed and all components are made with protection from the elements in mind.

As it relates to HMI lighting specifically, the dimming capabilities of this light are not to be diminished. HMI fixtures generally only dim to about 50%, or need to be cut down with scrims or other modifiers. The 600d has the capability to dim from 0-100% in smooth steps with a CRI of 95 or higher across the whole spectrum. So, you can dial in the perfect contrast ratios with almost zero color shift.

Bowens capability takes the 600d a notch even higher.

As with most of their other fixtures in this line, this fixture has a Bowens mount on the front. You can use all of your softboxes, lightdomes, chimeras, snoots, anything you have that is Bowens compatible. But you can also use their new F10 Fresnel, a 10 inch glass fresnel attachment that literally raises the output of this light from 100,000 lux at 1 meter to 200,000 lux. The F10 fresnel attachment provides a soft and even spread with increased output, and features a focusing mechanism allowing for a variable beam angle of 15-45 degrees.

There is no official price for this product yet, but Aputure does plan to have it ready and available for purchase by Q3 of this year.

As stated, Aputure has been teasing this light for quite some time. However, at long last, it’s here.

This light features what they are called RGBWW. This means there is a chip for Red, Green, Blue, Daylight, and Tungsten. As a result, this light can re-create a broader color spectrum than just about any other light in its class (RGB soft panel style lights). This light is capable of reproducing colors covering 90% of the Rec 2020 color gamut. So, this means that your RGB light will be able to re-create just about any color that your camera sees. 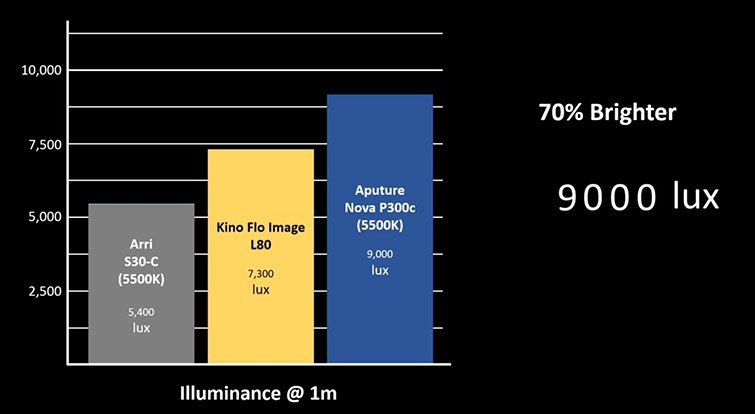 In keeping with their tradition of creating fixtures that pack more punch than the usual competitor, the chart above shows that the C300p has more output than both the Arri S30-C and the Kino Flo Image L80 (both of which cost over $4,000). The light also boasts 95 CRI and has near perfect color rendition on any setting.

But put aside from all the other usual Aputure features, such as compatibility with their Sidus Link App (allowing you to control the light and effects from your phone using bluetooth mesh technology), and fantastic light control and design from the included controller. This light will start shipping on May 27th and is priced at an incredible $1,699 for the standalone light and $1,899 with a case.

For anyone keeping score at home, that’s brighter, cheaper, and better than the competition at less than half the price.

Why Aputure is Killing It

Aputure’s lineup of lights, perfect for the pro and the amateur alike.

The reason why Aputure’s new releases (and the majority of them up to this point) are so special is that they defy the current logic of the filmmaking gear-space. There is a rule that dictates that if you use cheaper and more affordable gear, you get less features, durability, and functionality. With Aputure products this simply isn’t true. Their products are affordable, they have more features, they are more convenient, and they lack nothing that their much more expensive counterparts have. This makes it so that they can serve the professional and beginner markets simultaneously. Everybody wins.

So, as you can tell, I’m an Aputure fanboy. I tend to geek out pretty hard when they announce stuff. The reason why? Because they put tools in my hands that were previously annoying or harder or more expensive to access, and they innovate while doing it.

With the 600d, they have truly set forth a new world of film lighting for both professional and independent filmmakers. A world where we’re not hamstrung by our power outlets or our budget. We can roll into a location with a few of these lights and get enough power to rival the sun, all without blowing a circuit.

With each new release, Aputure continues to chip away at the traditional film lighting market, showing them why their products shouldn’t cost as much as they do, be as difficult as they are, and why the other bigger companies need to adapt to this new world and begin to serve more of us.

Want even more info on video gear releases and news? Check these out.