What do you want your lighting to convey emotionally to the audience? Here is a good example: Think how theatre directors use pools of light to draw the audiences’ attention to those spots on the stage. Your eyes have to go there, right? But hold on to that thought and we will get back to it and a great use of dramatic lighting example later.

So, what is good lighting? People will ask me all the time straight out if it is the newest technology. Or they will ask is it something else like maybe it is some kind of magic formula? The kind of magic that only lighting directors have in their back pocket? I hear these types of questions all the time and I am sure you do as well. In my opinion, lighting a studio production is a careful (or serendipitous) blend of both technology and art.

With these thoughts in mind, I was curious to see if studio lighting had changed much in the last few years. I talked to all kinds of people in the lighting and production space; people that really know their stuff like lighting directors, producers, technicians, and distributors.

It turns out that while technology has taken some huge leaps forward, many basic principals still apply.

I first caught up with Tobi Sali from BB&S. Tobi has a wealth of knowledge about what people want and need in the studio, having supplied broadcast lighting solutions to nearly every corner of the planet. I wanted to find out what are people are asking BB&S for in the way of studio lighting. “Just about every request now is for daylight in the broadcast studios since they are using video walls. We are lighting more Green Screen rooms now but that is also Daylight or Chroma Green; which we offer.”

Sali adds: “We get the input from the lighting designers for the different talent positions. Most new rooms are smaller while the traditional rooms have the high ceilings and we have LED fixtures for both. All fixtures are 97CRI or 98TLCI rating or higher.” Sali also added these thoughts on his clients major concerns: “It’s more about need to look good with the new cameras and added color from the video walls.” 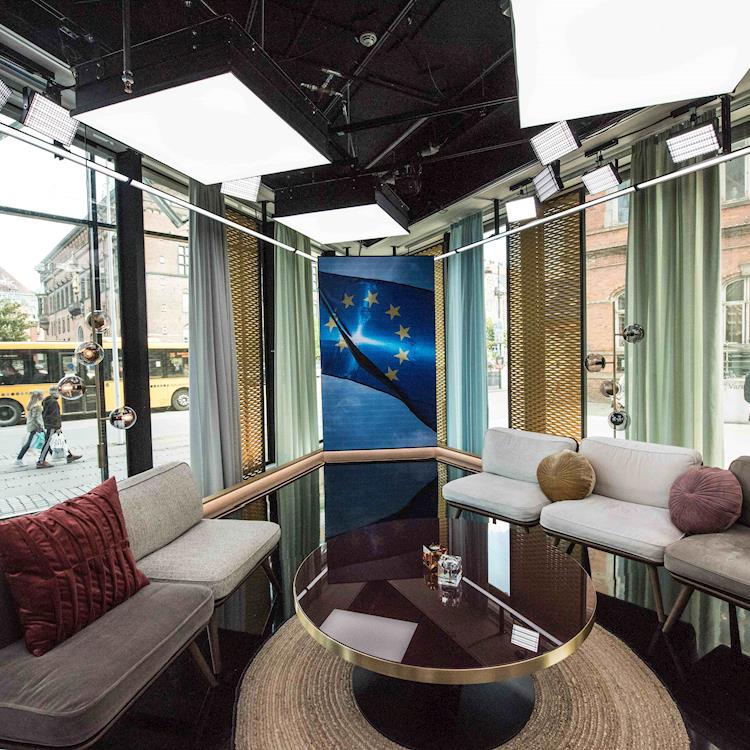 I also asked Tobi about some of the more complex set ups he has seen and some of his favorites.

“We have done all white fixtures in a white studio while some of the larger rooms the designers have set up used all of our fixtures for six position desks. We do not have any personal favorite setups since every room dictates what it needs to correctly light the talent. But I personally really like our Reflect 2’ 2-Bank Remote Phosphor fixture. We can use it in the smallest rooms all the way the some of the bigger rooms. One example is 5 fixtures 10 feet in front of the Sports Desk with only an 8’ ceiling wrapping soft light around 60% of the set.” 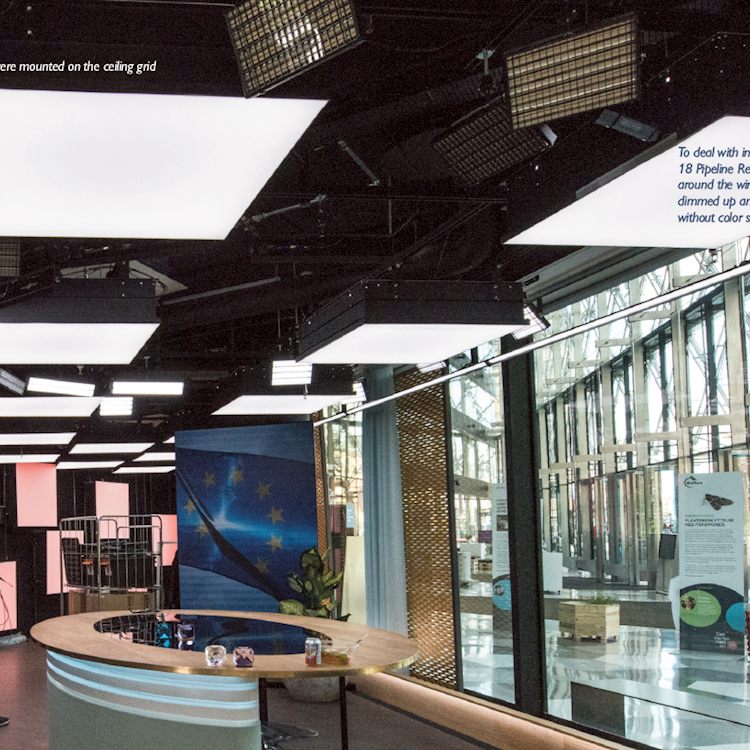 But lighting for studio production isn’t always a fixed category and can be based on the particular needs of the client and the types of lighting that you like to work with or maybe even just have on hand.

Take Nick Walsh from LiveX. Operating out of New York City , LiveX has all kinds of major clients.

From broadcast inserts, to corporate and just about everything else coming in the door, Nick and the LIveX crew have to make it all look good and don’t always have a ton of time to get it right. I caught up with Nick in between productions for some insight as to how LiveX goes about their projects. 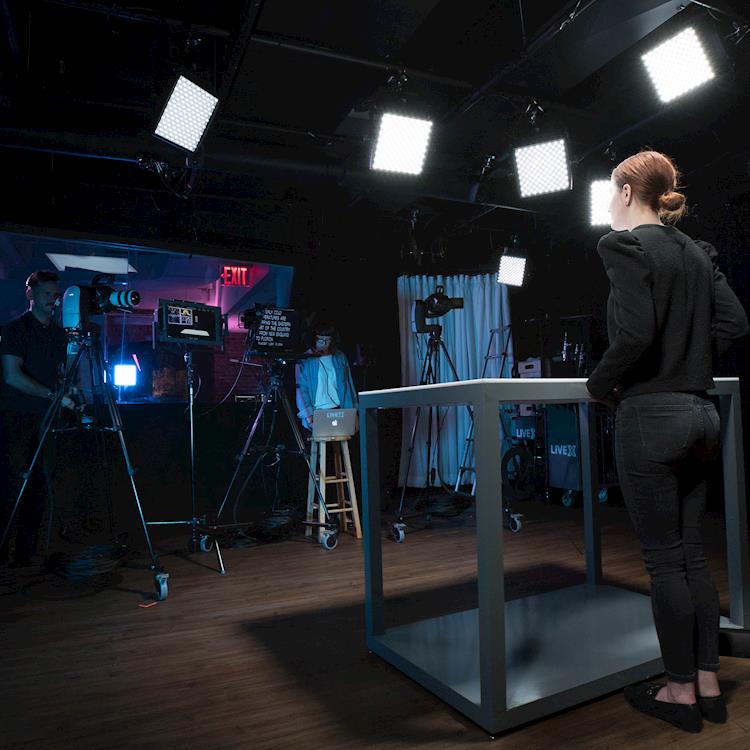 Quasars are also super great to have around, it’s been cool to see the industry embracing these. We’ll typically run all of our lights off of EOS Nomads with DMX (typically over CAT6).” I also asked Nick what are some of the more complex lighting requests from their diverse clients.

“For us here at LiveX it’s things that require complex cuing and timing with the lights that aren’t just “turn on and leave it up”. Luckily, I cut my teeth on an Ion back in school so having the EOS software on hand has made shows like this much easier.” 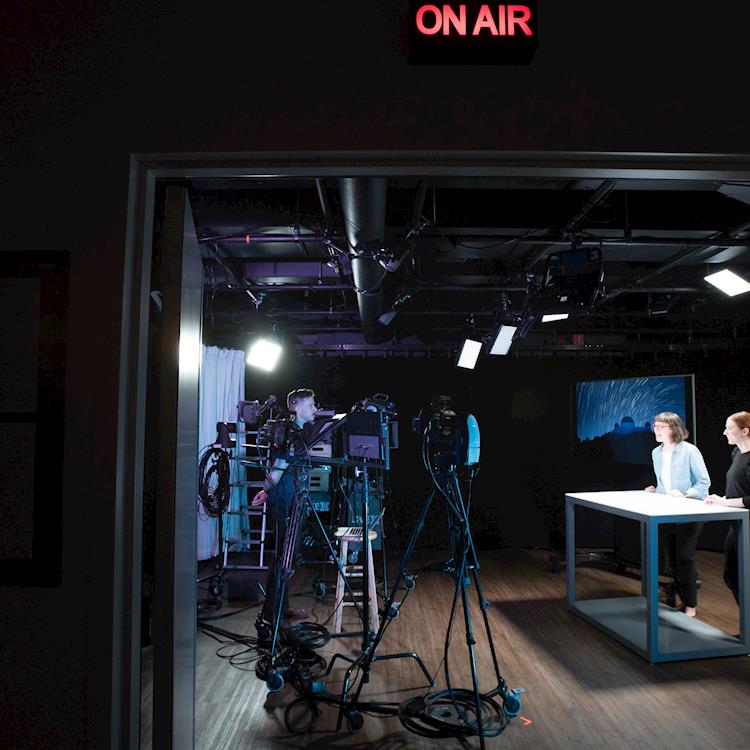 Lastly, I asked Nick if he had any favorite lighting set ups. 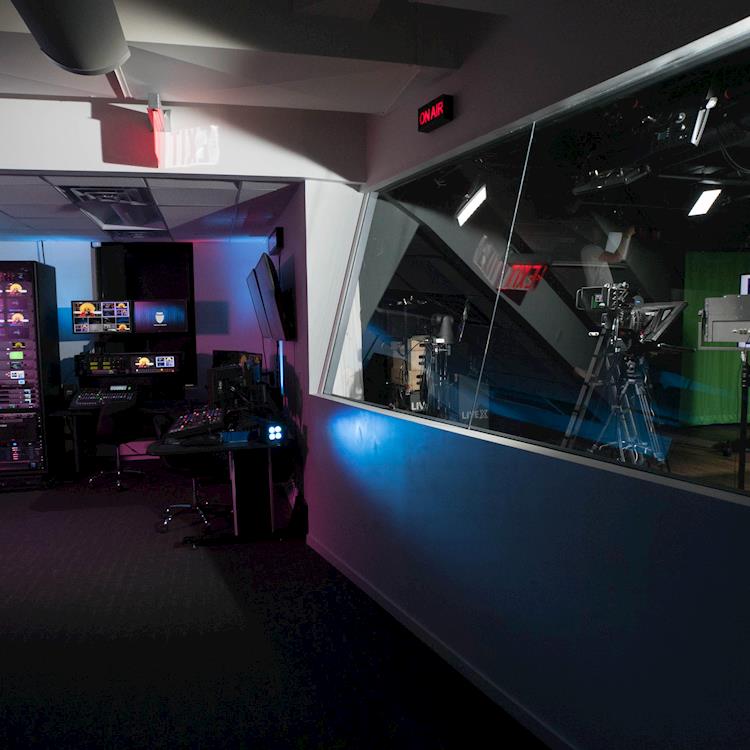 “I like diegetic set ups which basically means that the source is in the world of the shot, as opposed to off camera. So that’s like seeing a lamp in a shot, or a sconce or something, as opposed to all of the lighting happening off camera.” Thanks, Nick. You always have good stuff to share with ProductionHUB.

Next up, I caught up with my good friend and Emmy Award winning Curtis Pair, of azPTP. Curt has worked for and in about every studio and remote production environment possible, and with that kind of diverse production background, it was a no brainer to include him in the studio lighting discussion. I think you will agree.

“Lighting projects for me work in one of two ways… they either work as me being the director / director of photography in which I rent a studio and light the project myself, or where I’m brought in to actually light a set, more or less as a lighting director for someone else’s project. 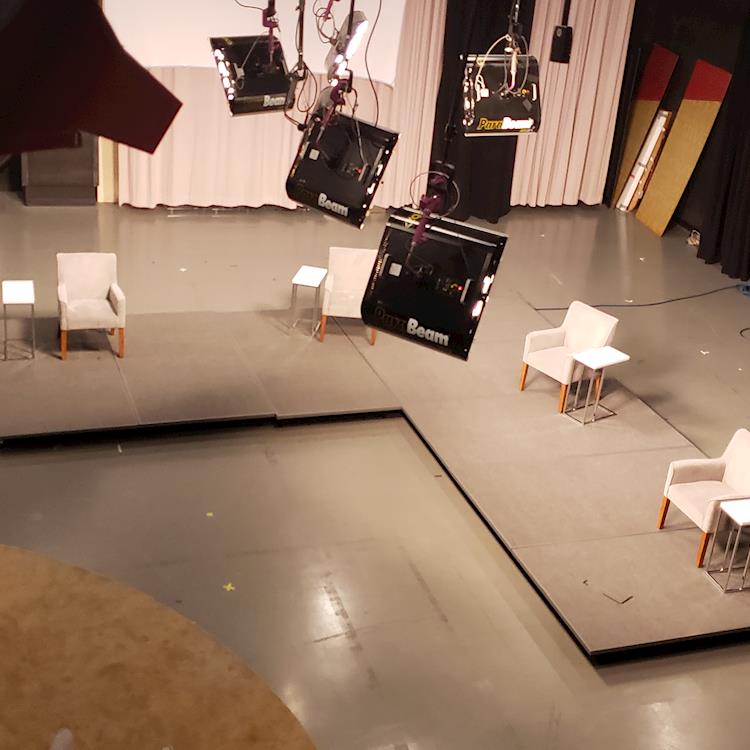 When I’m lighting a project for my own production company, I’ll use whatever instruments I deem appropriate. If it’s chroma key, for example, I’ll rent Space Lights (in daylight) and then supplement with HMIs and/or Daylight LEDs. If I light cars in studios for example (I’ve done a ton for Barrett-Jackson auto auctions, including the live stage on TV), then I bring in a HUGE 30’x60′ custom made softbox, and then hang various lights within it. (For Barrett-Jackson, we’ve used 2K scoops, in the past but now I’ve migrated to Kino Flo ParaBeams because of heat.  Now, it’s all Quasar Science tubes. I do from time to time rent DMX dimmers from a local rental house; I usually use what ever they have on hand.”

Curt went then went into detail about his philosophy when he approaches the lighting situation. 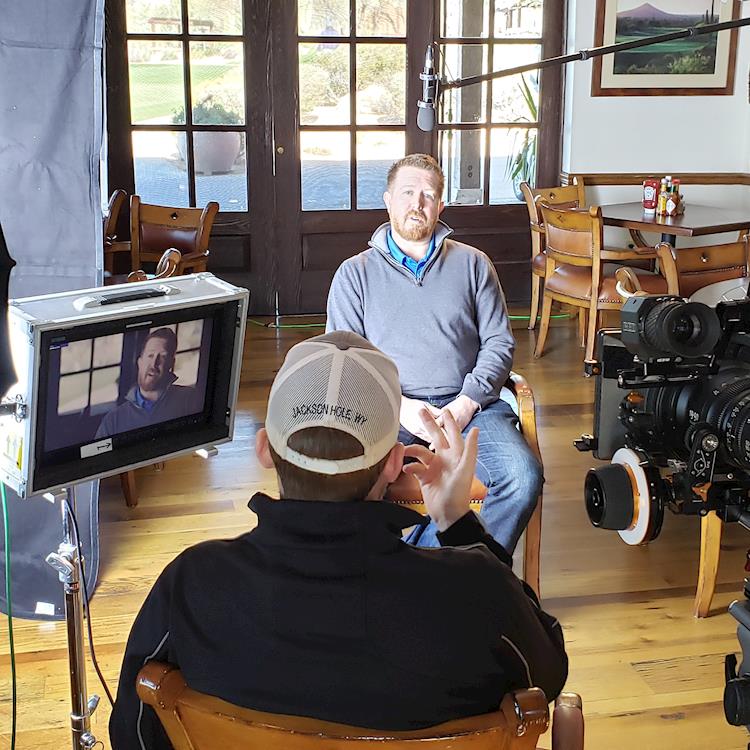 In terms of my favorite approaches? Kurt says: “I am one that really likes using soft-boxes. I’ve had spirited discussions with many industry professionals including you (Mark) that believe light is softest when shooting through large frames to create a “large source.”  I’m not one that buys into this feeling.  Instead, I turn my attention to the still photography industry instead.  When one thinks of fashion magazines, they think of beautiful people looking their best in the hottest clothing. These photographers make tremendous amounts of money to shoot the high profile covers. They could incorporate ANY kind of lighting they wish… these photographers DO NOT use the large frame and many lights through that framed diffusion approach. Instead, they use soft boxes!  Many today have turned to the “octo-box” shape over the rectangular shapes. I asked a manufacturer as recently as September 25, 2020 “why did you start making this shape?” Their response: “it’s because it’s easier to work with… when you light with rectangles, you have to know what you’re doing… Octo-boxes make even folks that aren’t as proficient with lighting, appear that they are!” 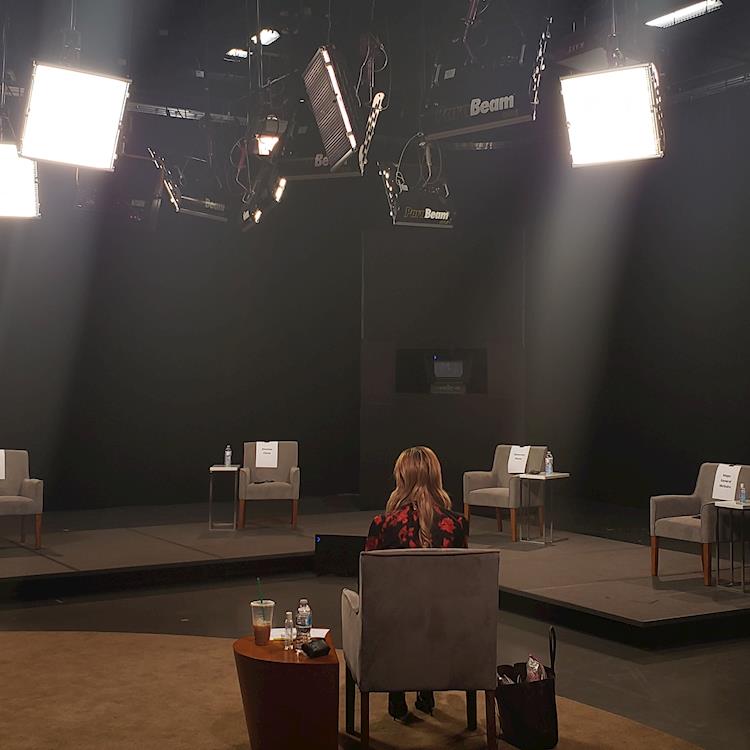 I had always thought it was due to the shape of catch lights.  I believe that high-end photographers use softboxes because they’ve been ‘mathematically’ designed to bounce light around in the box before it leaves the front. This is why they provide that pleasing soft source. Conversations with some of these photographers have confirmed my own conclusions. This is why they are predominantly available in a trapezoid shape. It pushes light forward as it bounces in the box.”

To read more of my exclusive lighting conversation with Curtis, be sure to check out an upcoming article on the ProductionHUB blog.

So again, even after a few good examples, the question remain: What is good lighting?

In my opinion, as with good sound design, good lighting design and execution is capturing the very essence of the emotion in the shot. Creating great lighting is not just throwing a bunch of fixtures up on the grid. It is about creating depth and shadows and contrasts that will capture imagination and in my opinion, new lighting technologies allow for even more creativity. But a word of caution for good measure. Unless you are trying to make your lighting THE show, try a little restraint. Take your lighting thoughts from nature and from any thing that inspires you to make a lasting impact on your audience.

Closing Thoughts and a Little Story

Earlier in my career I was working as a stagehand on a huge concert for a band I can’t mention. All I can say is that the singers name was Fred M. As one of the musical numbers progressed, a follow spot with operator descended lower and lower from the grid, the beam getting tighter and tighter, until it was just feet away. The performer (Fred) and just one source of light. Everything and everyone concentrated on that one dot of light in that huge space. It was mesmerizing. A great use of the technology (at the time) bringing the audience one unforgettable moment. I can still see that moment as though it was just days ago. So let me ask you: How will you light your next unforgettable moment? Let me know!