Should You Co-Direct? Things We Learned While Sharing the Director’s Chair


It’s unlikely to find yourself forced to co-direct, but if you’ve made the choice to collaborate this closely with someone, you might still have some lingering trepidation.

We are Kate Beacom and Louis Legge, co-directors of the film Rehab Cabin: a dark buddy comedy about two best friends who kidnap their favorite has-been child star and try to put her through rehab so she’ll be in good movies again. We filmed in New York and parts of New England in 2018. The film premiered at Portland International Film Festival in March 2021 and we’re looking forward to a year of more festival screenings.

We met at the now torn-down Sunshine Cinema in the Lower East Side. Kate had written the script for Rehab Cabin the year before, and in those crappy job conversations where you talk with your co-workers about what you really do, agreed to send the script to Louis.

When we began working together on the film in earnest, Kate planned to direct and Louis planned to produce. After a failed Kickstarter campaign and a sizzle reel that never enticed investors, it had become clear that Louis’s creative vision went a lot farther than a producer.

We were on the same page about the look of the film and shared the same emotional connection to the story. Here was someone who had come from the other side of the world but felt all these same feelings about the sorrow of a fading friendship AND could talk for hours about the morality of celebrity.

And so, we became a two-director movie! 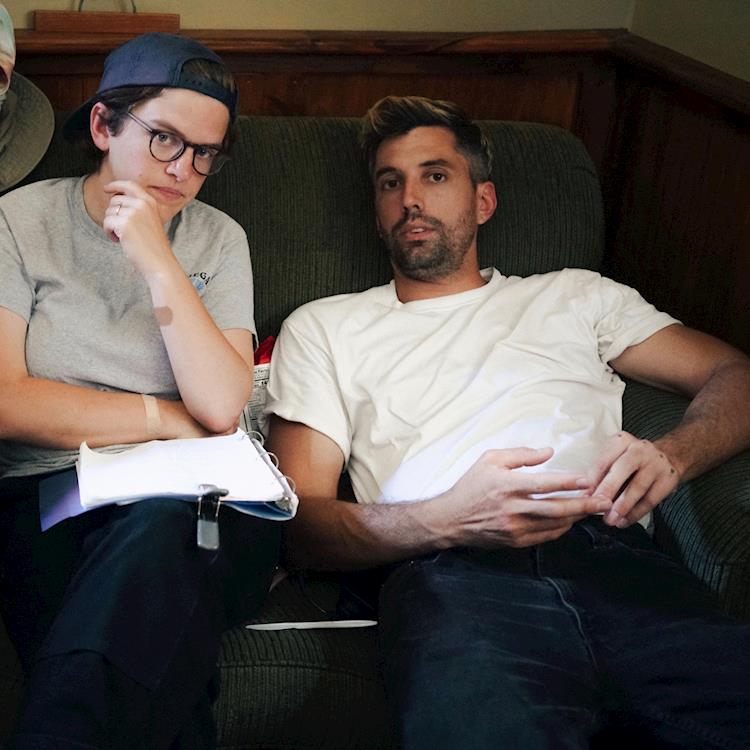 We think we did so successfully, because we’re still friends and would work together again, but it’s definitely not for everyone. You should co-direct if your collaboration will create a snowball of enthusiasm, more than it will create roadblocks of ego.

As we were writing this, we discussed other co-director teams and found they are mostly married couples or siblings. We are neither, and regard our friendship today as an excellent byproduct of a mutual need to bring this film to life.

Film is famously the most collaborative medium, and co-directing Rehab Cabin definitely felt like taking things to the next level. In some ways it took pressure off of us as individuals, because we were able to play to each other’s strengths and had a teammate to bounce ideas around. It gave us an extra boost in our confidence in creative decision making, because we had to explain every choice we wanted to make to the other person. Hearing it outloud, and getting another perspective from someone equally committed was really helpful.

Being an extremely low-budget, mostly self-financed feature film, Louis also edited the movie. There’s that famous quote about a movie being made three times: the first when it’s written, the second when it’s shot, and the third in the edit. We like to imagine it as a Venn Diagram – at different times and all at once it’s Kate’s story, it’s Kate and Louis’s story, it’s Louis’s story.

We found out quickly that Louis would know when it was important to have a dirty over the shoulder and that Kate knew which shirt was right for which scene.

Assign creative jurisdictions. A common refrain on our set was “That’s a Kate question” or “That’s a Louis question.” Be prepared to give up all control over these decisions when you’re on set. No one will have time to listen to you two hash out character motivation or which throw pillow you prefer. If you know who’s gonna explain what to which crew/cast members ahead of time things will move along, and no one will have to talk to a director who doesn’t have the answer.

Fix It in Prep

Pretty much everyone knows “fix it in post” is actually not a solution to most problems that crop up during production, and that the key to a successful production is in pre-production. We found this to be especially true as co-directors, since we had to get on the same page about all creative decisions.

We spent weeks doing a very detailed script breakdown together, combing through the script, doing punch ups and a final rewrite. We had to be sure that if we were in a position on set where we had to make a snap decision without being able to talk it through, we had a really strong foundation to work from. Reach an agreement on every minute detail before other people are waiting for you.

Read through the script together, reading the lines the way you would like to hear them. This will help you agree on the meaning of the line, the character’s motivation, how to talk to the actor about it, and will lead to a shared vision of the movie you’re making. We tried to have three options for almost every line. Maybe the notes would be “betrayal” and “disappointment” and then we’d throw in a third, less similar option as a way to build in experimentation.

After our shooting draft was finished we went through the detailed storyboards Louis had made, essentially watching the movie together. We had one or two rehearsals with our three leads where we went through all this information with them, and incorporated ideas they wanted to try as well.

All this prep enabled us to work a lot faster on the day. In the moment-to-moment decisions or direction for an actor, we weren’t slowing everybody else down to wrestle through creative choices, or what someone’s motivation was for saying that particular line and that particular moment. We were shooting almost ten pages a day during the cabin scenes and were never bogged down by trying to make a decision.

Agree on what should be the movie’s best qualities. Besides all of our pre-production work, we agreed on the “crux” of the film. What’s the thing that every decision is based on? Every camera angle, action choreography, joke reading. What do we want people to remember? What do we never want to sacrifice?

Loving our main characters and the nuances of their friendship was our common goal. We tried to make all our decisions around character and tone. We knew we were walking a fine line tonally. We wanted the movie to be serious (but not too serious) and silly (but not too silly). Our main characters commit a violent crime, but we needed the audience to be on their side and sympathize with and relate to them.

We spent time with the actors discussing the scene prior to the one we were shooting, paying special attention to the headspace the character would be in, so that the tone would carry through the performances. We didn’t want the movie to switch genres from scene to scene and more than anything we needed our character’s arcs to be believable and sympathetic.

We weren’t working with a lot of time or money, so production value was always in the back of our minds, but if an impressive technical choice would eat up a chunk of the day and late affect an important emotional scene we’d know how to make that decision.

We were sometimes able to decide between a “Louis Idea” or a “Kate Idea” by which option served a character better, would add more to the themes, or felt more true to the movie’s tone. 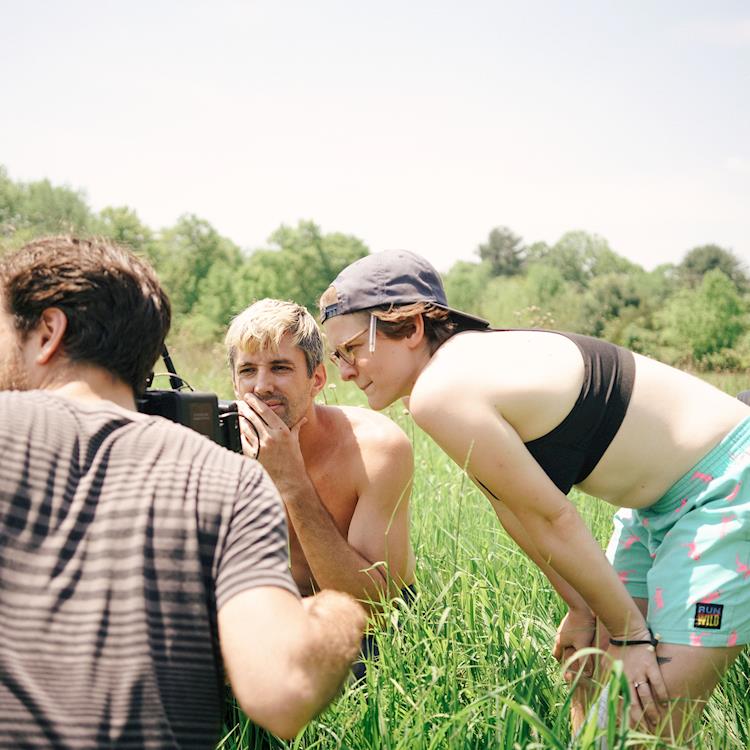 The reality is that no matter how much prep you do, how many of the same movies you watch for the look and feel, and how fun making a mood board together is there will be disagreements. Despite our jokes on set that we had morphed into a two-headed monster (after the second or third day of shooting we did start coordinating outfits. Like literally: “What are you thinking of wearing tomorrow?”), we unfortunately remained two separate people with different backgrounds, sometimes conflicting tastes, and different relationships to risk.

When we ran into issues about a joke one of us didn’t get, or a change one of us wanted to try, we learned quickly to give the way to the person with more enthusiasm. The person responding to the problem with skepticism is experiencing doubt, maybe fear. We decided that the better and more creative move would be to try the new thing – it usually works.

Part of co-directing is learning to say yes to an idea you don’t like. We definitely had to swallow pride to get behind something the other one felt passionately about. It’s not that it was a bad idea – it just wasn’t our idea. When you’re making a movie it can be really, really hard to go with someone else’s idea. Sometimes you’ll have to blindly follow the enthusiasm that an idea sparks in somebody else’s head.

Choosing the choice one person is excited about leads to stepping outside your comfort zone, letting go of negative aspects of creative pride, and trusting someone with something special to you. Seeing the light about an idea that didn’t make sense to one of us are some of the best memories we have from filming. We managed to come out on the other side better friends than we were before, a happy ending for a film about a friendship ending.

Kate Beacom is a writer, filmmaker, and photographer living in Portland, Oregon.

Louise Legge is a video editor, post production supervisor and writer with experience in feature film, broadcast television and commercial video. He has worked in Australia, New York, LA and Europe for a variety of productions, companies and individuals. He lives and works in Los Angeles.