In the words of the late great Jerry Garcia and The Dead, “What a long strange trip it’s been.”

Truer words have never been spoken. But the question(s) still remains, Where are we (our beloved industry) in terms of actually working? Is it safe or not safe? Consistent production is still a moving target. Even as we speak, some if not all of  Los Angeles based productions have been shut down again, and the NCAA has just announced they are conducting the Mens’ Division One basketball tournament in a bubble in Indianapolis.

That  being said, I found out as I talked to people from all over in the production world, that there is no one absolute direct answer. But as dire as that may seem, productions are still going, being worked on either in the studio or in a remote situation. Some have standard safety protocols in place that are pretty common across the production spectrum, while others have procedures in place that are unique to that particular situation.

It goes without saying that many businesses and individuals took a big hit in 2020. That is not new news for sure.I know that for many including myself, production faltered at first, then just flat out stopped. I didn’t have a ton of stuff coming in at that point, but then even my other, other job just stopped being there. I said to myself that It was time for us to figure out a newer and safer way of getting back to work.

There is a new altered reality for remote location shoots.

Unlike a studio shoot, on a remote production, being outside can actually work for you. Not all the time, but enough. I like the idea that many location remotes are outside, but sometimes clients have different ideas. To find out what was going on, we caught up with some of our fellow professional media professionals to hear what was going on in their part of the production world.

First up is my friend Bruce Taylor, TaylorVision Productions out of New York and New England. Bruce is  real world and one of the hardest working pros I know. He was the first one I wanted to hear from when it came to dealing with high end work. 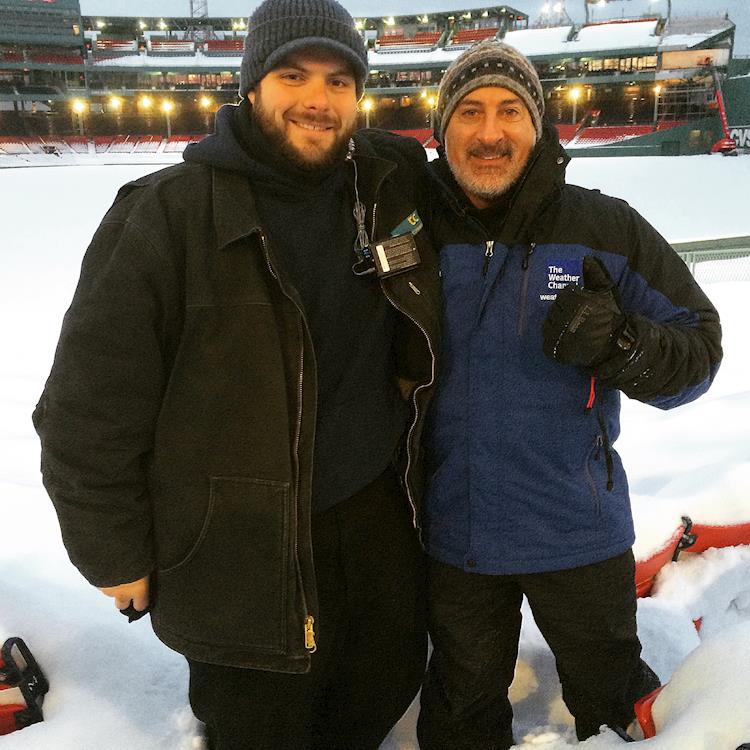 “With studios very slow to open after the first wave of the pandemic, some advertisers have resorted to renting out private residences and other large spaces to shoot some of their commercials and other branded content. 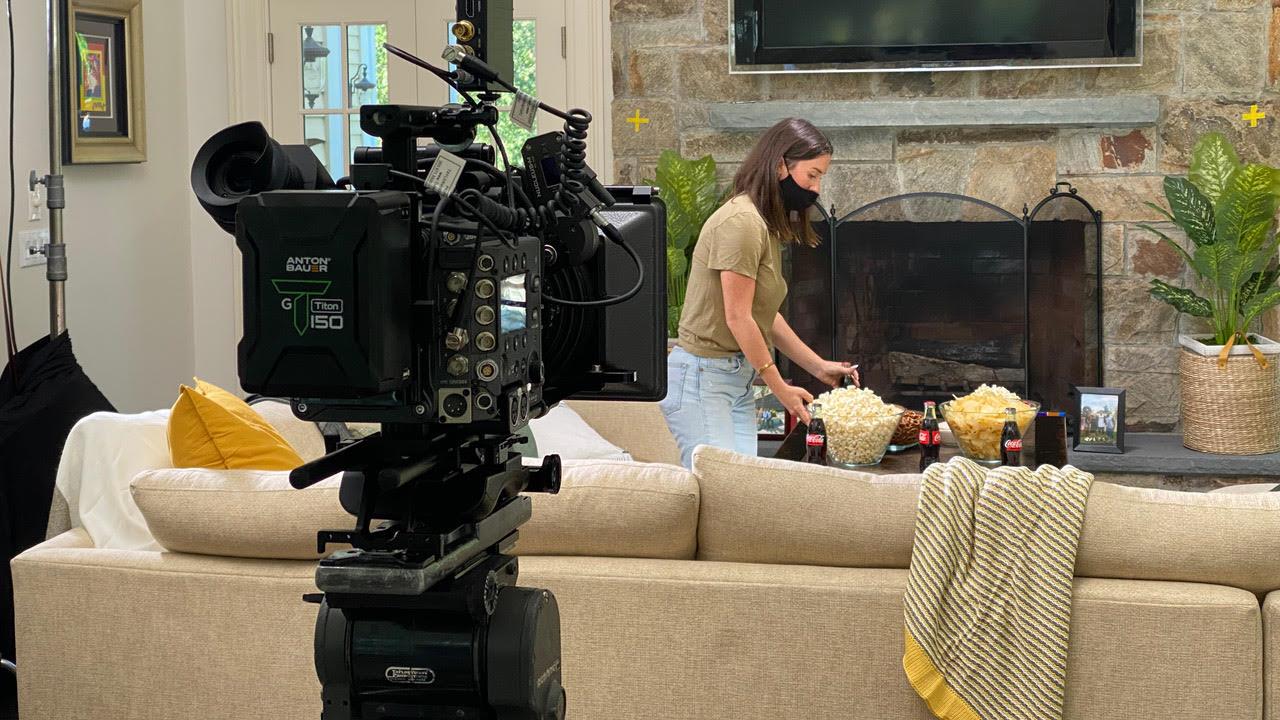 When the TaylorVision crew was hired to shoot spots for Coca-Cola, Snickers and Duluth Trading Co, such was the case for the Disney CreativeWorks team and ESPN Creative Director Jason Vega.  For the two-day Coke job we rented a huge home in Fairfield County, CT where we spread out as much as we possibly could.

Disney wanted to be absolutely sure that we provided the proper PPE equipment, masks, and sanitizing stations throughout the house along with signage in every area reminding crew members about proper social distancing and our Covid -19 protocols. The garage was a staging area for all the gear, the large kitchen is where the props and art department set up, we had our set in one of the living rooms and we sent an RF signal to the video village in the dining room using our Teradek system.

Then, in real time we had a live feed over the internet to the agency’s creative folks so that they could be on set virtually.  There were four actors waiting in another space serving as our green room.  Hair and make-up was downstairs, and when we had our lunch break we all had separate boxed lunches and ate them outdoors. 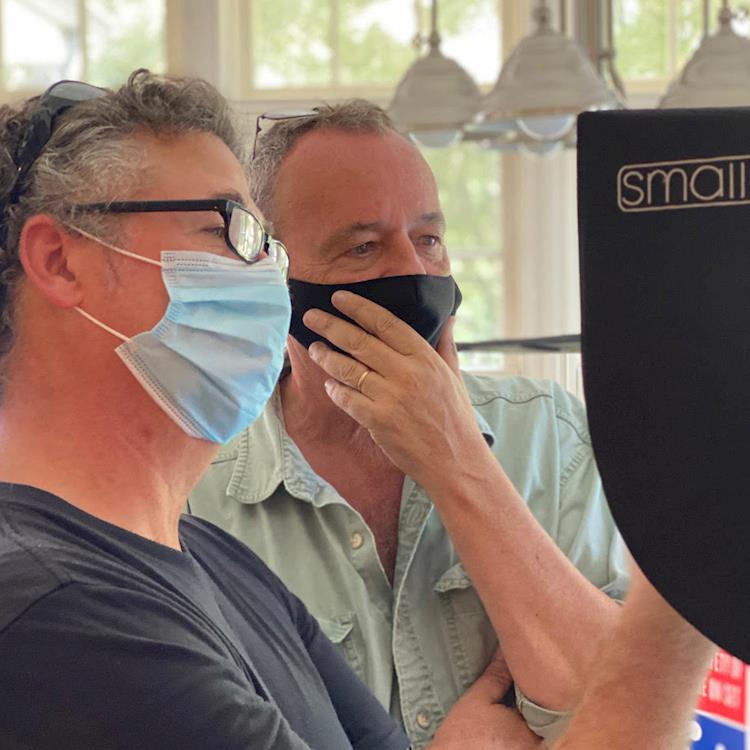 Anyone that has ever been on set realizes how difficult it is to remain socially distant at all times, but we successfully pulled it off with our 12 person crew. We employed as many wireless devices as we could to help eliminate the need to be in close contact with one another.  In some instances, when shooting with a dolly, I would often be riding on it pulling my own focus. 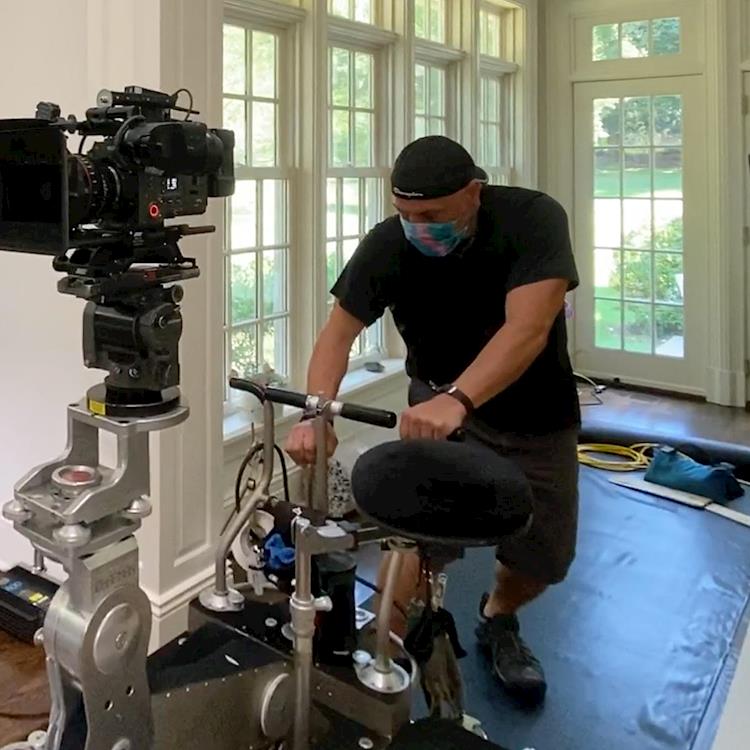 Instead, we had another area set up with a 24” monitor for the AC to do it.  I have a feeling that many of these types of procedures on sets and in LIVE remote production scenarios will be with us through much of 2021. Thankfully 2020 is behind us and hopefully we can get our industry back on track and get more of us back to work.  Until then, in my opinion, there are still many things we can do to maintain a safe working environment for all involved.” Well said Bruce.

Next, we caught up with Aaron Rizzo. Aaron is a freelancer in upstate NY and is in the thick of live sports production,  whether it is the Buffalo Bills, Sabres or other pro sports. I think his experience(s) speak volumes to what is going  on in the struggles to work safely and to just keep working.

“I’m in Buffalo, NY. I work with the Bills and Sabres primarily but have been trying to pick up more freelance. Overall it’s been ok—people want to follow guidelines and people respect the rules, but it’s just difficult sometimes to abide by them. For instance, you’re trying to fix an issue with a camera or, you’re trouble shooting an issue and someone comes over to help naturally, but now your breaking protocols. It’s hard to be helpful and a team player with Covid guidelines. It naturally puts a barrier between you and the crew. I would say all of the issues I’ve run into have been in the field with commercial shoots. The NFL has done a great job, and so far the NHL seems to be just as strict. It’s really commercial productions or narratives where there is a lot of problem solving happening where things can be hard to abide by.”

Lastly we hear from another industry veteran (and long time Titans fan), Curtis Pair who also had an interesting take on the current situation. 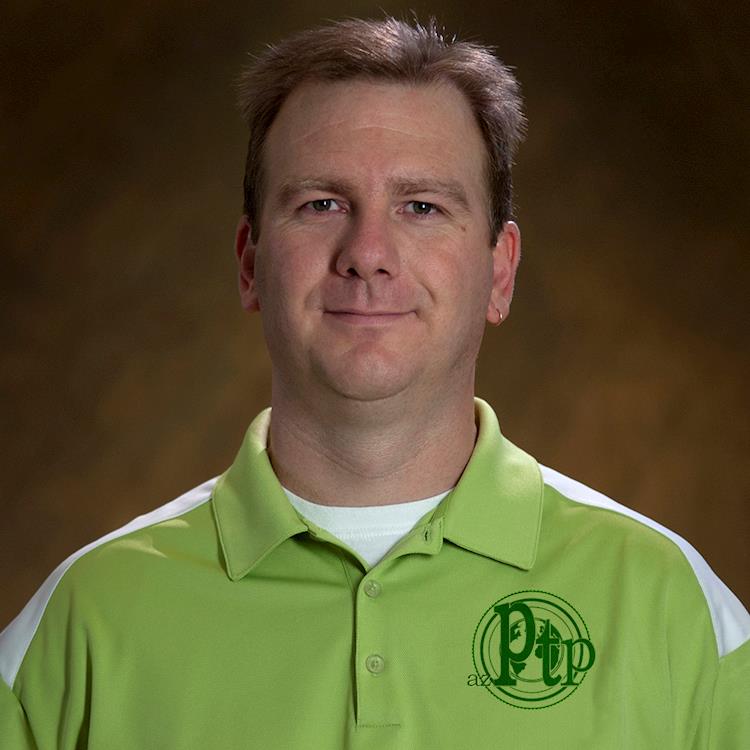 “I’m not sure what everyone is doing… it’s different for different productions, at least in Arizona. Some want testing, others don’t (at a cost to you, the production professional, not them). I can say that on every shoot these days, one must wear at a minimum a mask.  There’s also social distancing too.  Some required a face shield or eye protection in addition to the mask.  I had one gig where they made everyone wear surgical type gloves that they provided.  If you touched a person, or piece of gear someone else had touched, you had to throw the gloves away and go with a new pair. I even heard from friends in LA that when productions were working they had to hire people to wipe gear down with antibacterial wipes every 2 hours.  So they hired folks just to do that!”

On the Way to Safe(er)

Fortunately for location and production managers, there are companies out there that can help mitigate or lessen the risks of things going south on location. I think that it is important that any “safety” company—new or established—or be certified and be able to provide referrals.

Here are a few examples.

Amphibious Medics provides COVID-19 screening, testing and general support to many SAG/AFTRA and non-union productions all over the country.  According to their website they follow each production’s interpretation of the Production Safety Guidelines, “The Safe Way Forward” (joint report of the DGA, SAG-AFTRA, IATSE, and Teamsters) published in June. Also our Amphibious’ sister company, Savi EHS supports productions with set specific COVID-19 mitigation plans, provides COVID compliance personnel as well.

Amphibious Medics was originally created as a Set Medic company to serve the entertainment industry, with hubs in Los Angeles and New York. Many of their clients have roving productions, such as cooking shows, reality TV, adventure series, etc. They  provide a local set medic in each city or assign one to travel as part of the crew. Set medics travel to some of the most exotic and unforgiving locations on the planet, including Africa, Asia, the Amazon, and the Middle East, keeping crews and locations  safe.

Next up is a short Q&A with another solid company, Remote Medical International.

PH: Please tell our readers a little background about your company and how they work with the entertainment industry?

PH: What are some of the most common requests when it comes to keeping a location as clean as possible? 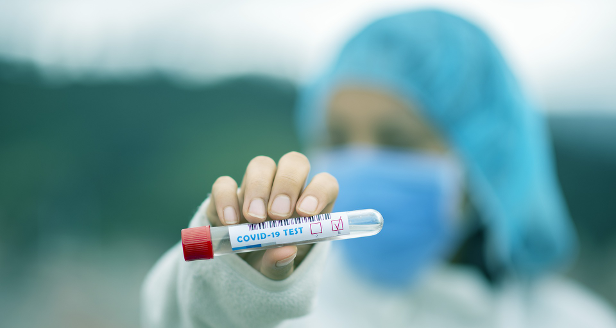 PH: What happens if a director or others are being non-compliant on the set?

PH: I know you have many NDAs but do you have any success stories that you can share?

PH: Any other important info I might have missed?

I wanted to finish with what I feel is a positive story. Be Electric is a production house that has been opened and continues to do well, despite the setbacks that have plagued other parts of the country. We caught up with Sean Whalen, Studio Director for Be Electric. He had this to say:

“The good news is that we’ve actually been up and running since we were legally allowed to reopen in June, and had an extremely busy fall. Everything is strange of course because of the COVID-19 restrictions and safety precautions, but in general I’d say we’re in a pretty good spot. 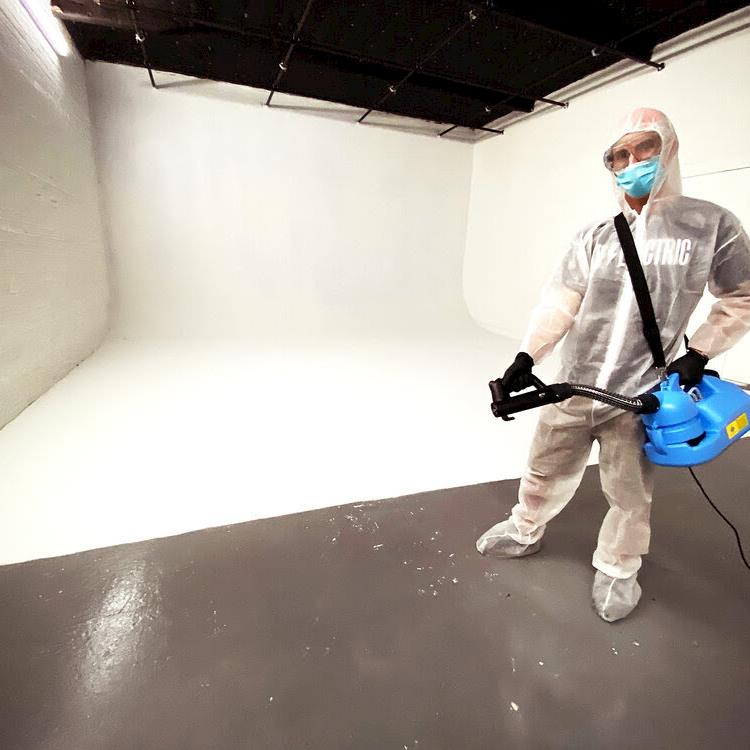 Most productions are hiring their own COVID-19 safety and compliance teams, and we’ve seen that nearly all of the jobs who come through have compulsory on-site testing for crew.” Sean closes with this thought. “To my knowledge there have been no confirmed cases of COVID-19 at any of our studios, and I think that’s in large part due to the enhanced sanitization measures we’ve been taking coupled with the strict protocol to which the crews have been holding themselves. “ Well done Be Electric!

In my opinion, we’re making some progress. We are in a wait and see mode. It is going to be important that we are diligent and do the things we need to do. I know that many of you have taken a good shot on the chin but didn’t go down. Wobbly knees yes, but down? For the most part, no.

Production might seem “normal” but it is not. The biggest take away is that we didn’t stop trying to move ahead. Easy it will not be. We will figure it out TOGETHER. Keep the faith. I know I am.