Every year I marvel at how much time and effort goes into the production, engineering, and genuine enthusiasm that makes the NFL Super Bowl (and halftime show) one of the premier sporting events shown around the world. This year the game is being produced by, and broadcasted on, CBS.

There is so much production technology involved it is mind boggling. On top of that, add in the hard work and dedication of the thousands of production and engineering professionals from CBS and other companies like NEP that make the technology work for the estimated millions of viewers at home. I want to add in one more thing for your consideration before we pull back the curtain.

For CBS, overall production will continue the remote production model CBS Sports has used all season long for its NFL coverage, with replay operators working from home while other editors, graphics operators and show production personnel work at the CBS Broadcast Center in New York City. The fact that the show goes on (despite the pandemic) is a real testament to all of the production professionals working remotely and on-location, and a real commitment to excellence at all levels. I will get to more of that later, but let’s talk about some awesome technology. Ready to dive in? Let’s go!

Keeping All of the (New) Technology Straight 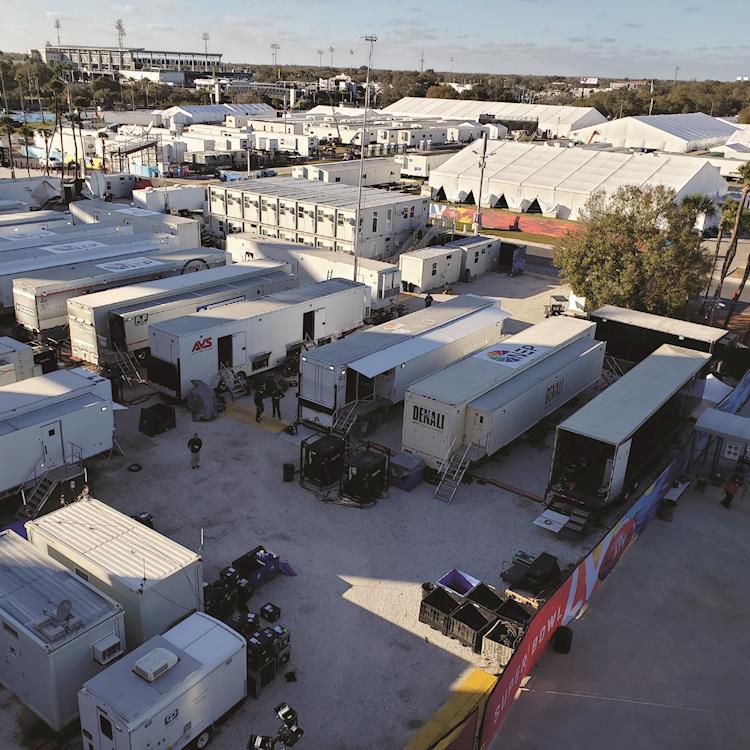 Big games and events are where the networks pull out all the stops to make for a memorable (and cool) viewing experience. This year is no different. We’re going to take a closer look at some of the latest innovations for the game.

The first innovation CBS is using what they call Trolley Cam. 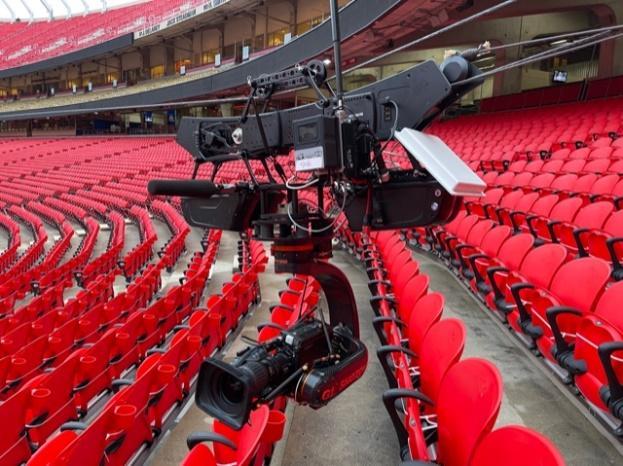 What is Trolley Cam?

For the first time ever live at the Super Bowl, CBS Sports will deploy the Trolley Cam. The Trolley Cam will speed from one end of the stadium to the other, ziplining along a wire, positioned to provide the viewing angle of a fan in the eighth row of the stands. The rig can travel up to 65 mph and will provide a look at the players from a vantage point never used in the history of the Super Bowl. 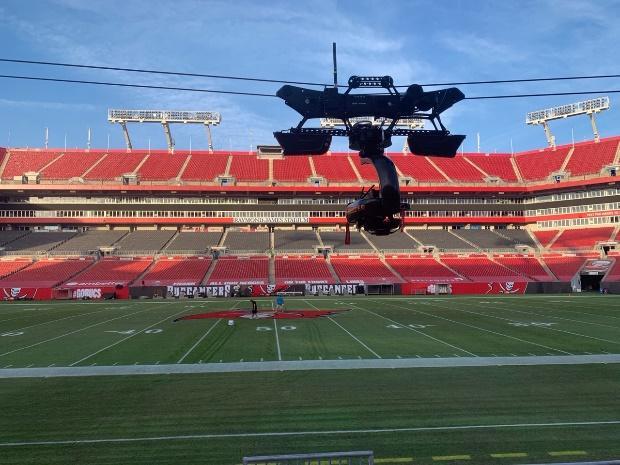 I will be very interested to see how this angle looks. According to CBS the Trolley Cam could only be added to the mix this year due to the limited amount of spectators (25,000) on site at the Super Bowl.

CBS will also use several on-field cameras to capture a new and different cinematic feel. Two Sony Venice cameras will be deployed for the first time ever live at a Super Bowl.

The Sony Venice, which is normally used for cinema shoots like commercials and movies, will use it’s full frame capability for a short depth of field to give it that “cinema” look. The cameras, provided by Inertia Unlimited, will be operated on a traditional steadi-cam rig, as well as a MOVI rig to capture the action in what has been described as a “3D video game” look. 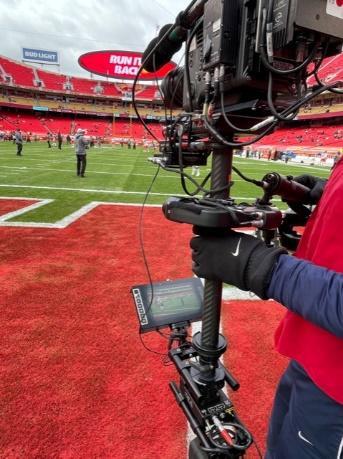 I thought that adding the Sony Venice to the camera mix was very cool but CBS hasn’t stopped there. The network is also adding in a 53-foot Movie Bird crane, traditionally reserved for major motion pictures and television productions. It will be located on the upper concourse to give shots of the THE SUPER BOWL TODAY pregame set, game action, as well as serving as one of the many augmented reality encoded cameras that will be strategically placed throughout the stadium.

Twelve cameras with 4K and 8K capabilities will be scattered throughout the stadium allowing the production team to get close-up shots in the key moments of the game. 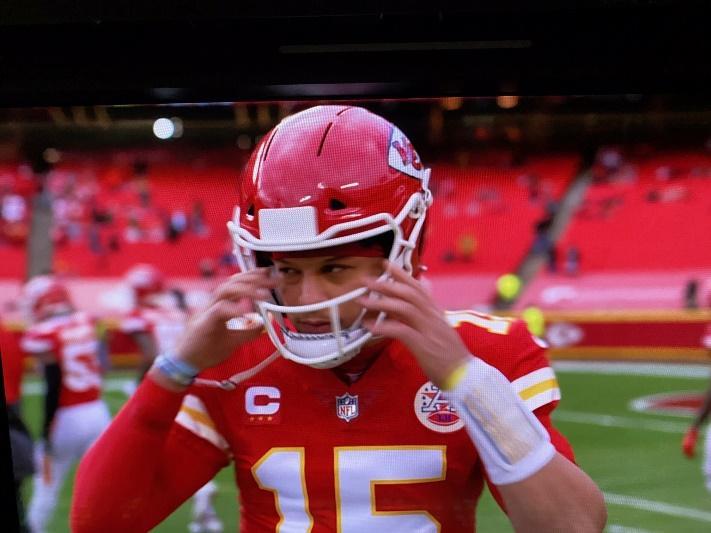 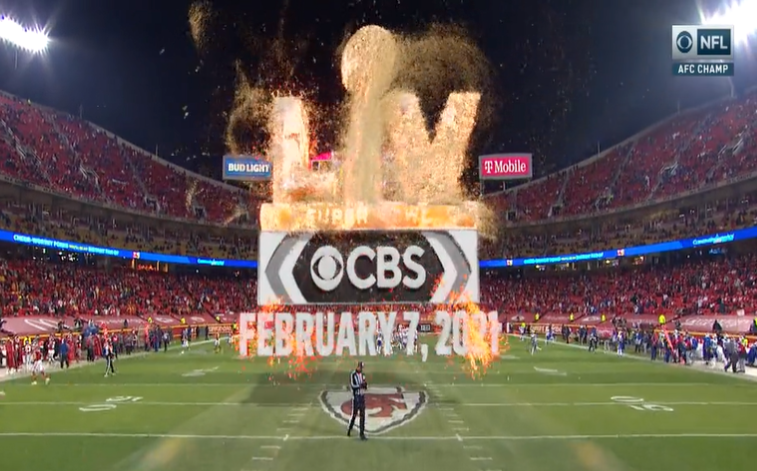 This year’s graphics package, which will debut the new CBS Sports logo on-air, will unify the image of CBS with the motif of Super Bowl LV of sea and sand by using four augmented cameras. Animations, in-game graphics, and augmented reality will continue to enhance the viewer experience. Utilizing the power of the Unreal Engine, embers and particles will light up the Tampa night. All really cool technology, but how to get that great game and all those images back to the house? Please read on. 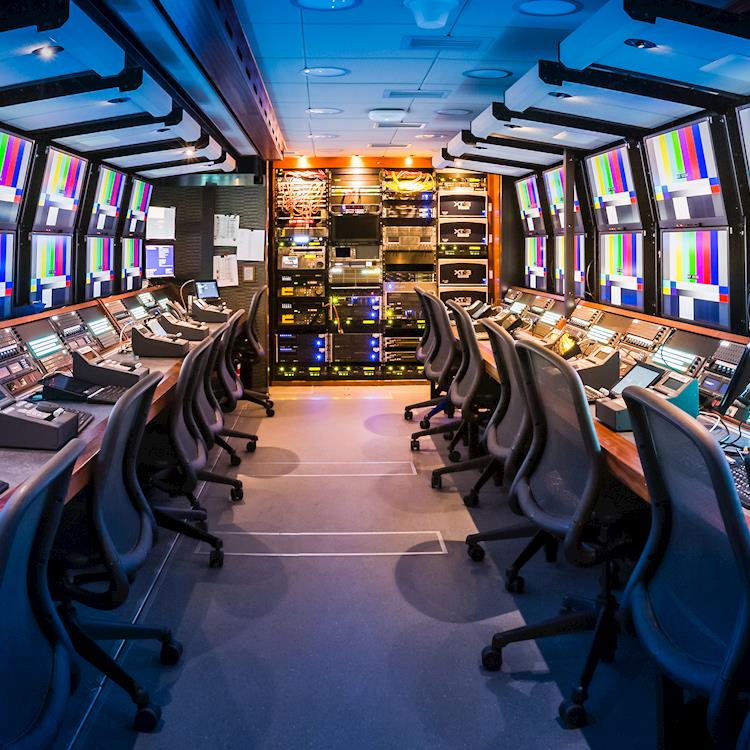 Well yes “IT” but not exactly that IT. NEP has loaded up for sure for Super Bowl 55. I am talking about some very serious mobile production muscle. So, this is one part of the production story where I get really excited.

Having “grown up” producing and directing in mobile production units I have a real appreciation for these guys and gals, but to be honest the Super Bowl takes it to another whole level by about the power of 10. Yes, call me a tech nerd I don’t mind. I love this stuff. 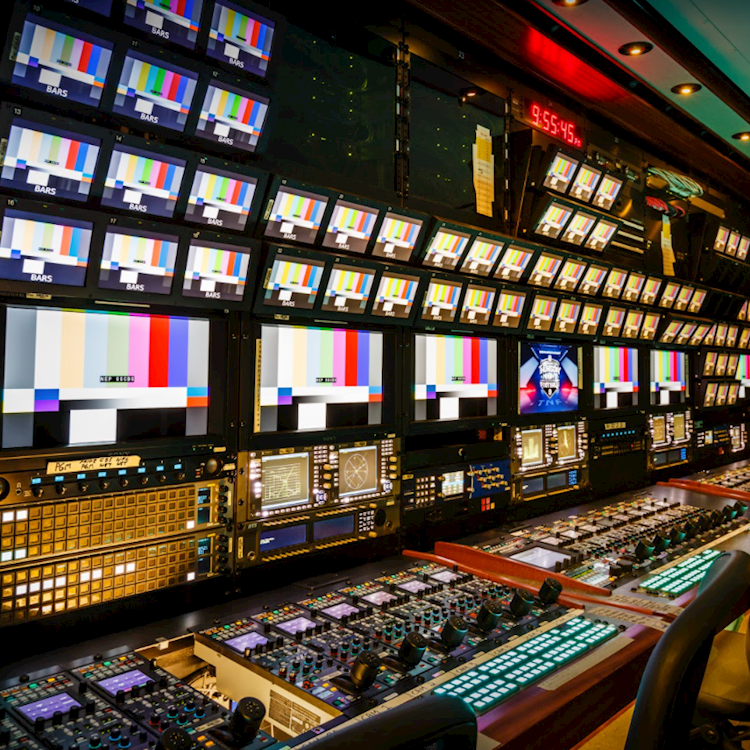 In the midst of all the pre game madness, I had the very good fortune to catch up with Glen Levine, President, US Broadcast Services NEP.

Glen shared some of his thoughts as NEP counts down to their huge part of Super Bowl 55 production.

PH: Glen, Can you tell me about yourself and your role with NEP? You have been at this for a while right?

Glen Levine: I have been in the industry 35 + years, my whole career. Been with NEP for 20 years. I have been President of the US Broadcast Services since 2014. I look after US Mobile, Studios, Bexel Rentals and Integrated Solutions. Yes we spoke prior to the 2016 Olympics!

PH: The Super Bowl is such a huge production. How far out do you start planning?

Glen Levine: We start planning a year or so out. We have multiple teams through the organizations working with all the different clients on project planning, technical solutions, operations and logistics.

Our team is part of each client’s team from concept planning, through the final execution. 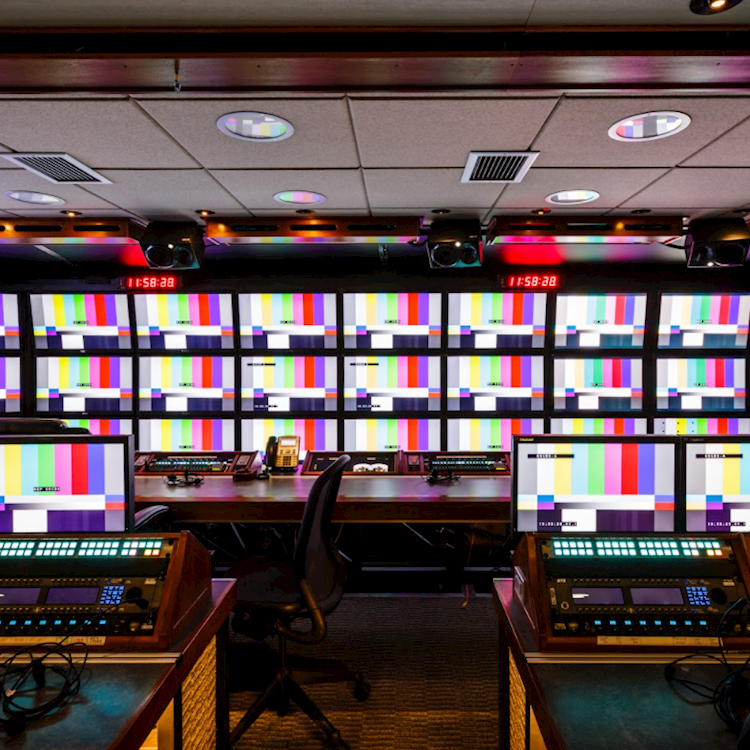 PH: How many NEP mobile production units will be on site this year and what role are they playing?

Glen Levine: In the compound NEP has multiple facilities servicing multiple clients These are some of the units that will be in Tampa: 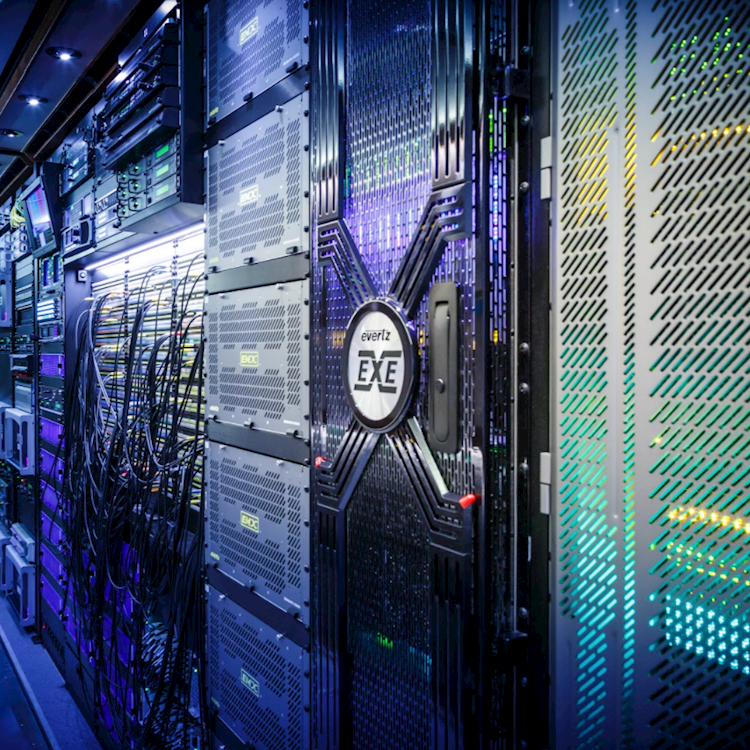 PH: What about the engineering part of the equation? There must be so much that goes into that part of it.

Glen Levine: NEP is also providing engineering expertise along with many other services in the compound. These services span all of the above clients.

Additionally, NEP/Bexel will be supporting all the clients with over 60 talented individuals consisting of Technical Managers, Engineers in Charge, Maintenance Engineers, Mobile Unit Drivers.

Engineering Specialists in the following categories:

PH: Can you specify the models and number of cameras you are supplying and are you shooting in?

Glen Levine: I would say this is mostly a Sony camera compound

NEP/ AVS is providing 16 RF speciality cameras for all of our clients.

PH: How is NEP handling COVID with the crews? (Honestly I hope someday soon to never have to ask that question again!)

Glen Levine: NEP has detailed and strict COVID protocols that we follow, along with all of our clients and the league. I have been involved with the industries COVID SVG Clean Freaks Team since it started back in the spring. A lot of really great information and protocols were generated.

We have a very strict cleaning process that includes UVC and routine wipe downs of highly used surfaces. For Mobile Unit air quality, units are equipped with Bipolar Ionization systems and MERV 13 filters.

We have spread people out working with each client to meet the needs of the production. There will be *plexiglass dividers in all the units. We also have developed a number of remote kits for personnel that are working the event remotely. We take the safety of our employees, clients, and freelancers extremely important.

PH: How much more work is it not only to “broadcast” but to stream the game as well? How many feeds do you have to provide?

Glen Levine: It becomes an added layer in the workflow.  Each client has a number of distribution points. NFL Films does the World distribution.

PH: Lastly, other than the game itself, what keeps you up at night?

Glen Levine: Lately it is COVID concerns. We have a tremendous staff that prepares for this event. Logistics and preparation are extremely important. As our team works with the clients, it’s how we are focusing on the details that makes the difference.

Wow Did You Get All That?

I know, so much information to digest.

Thanks to Glen and the great folks from NEP with their help getting this info together. Before we wrap up with a staggering “production by the numbers” list, we still have a little bit more ground to cover. Like the everything bagel. Did I just compare the Super Bowl to an “Everything Bagel”?

Think about ALL of the events and productions that are not part of the actual game itself. The halftime show has a whole separate production team and multiple production units. CBS has produced hours of features and tons of pre game elements and interviews. All during the week leading up to the game, local news and remote crews have been all over Tampa and Kansas City trying to make their coverage unique and memorable.  Of course I want to share more, but contractual obligations for some production companies mean that parts of the production cannot be revealed right now. But no fear. We will be following up with some exciting additional coverage of the Super Bowl production once that information becomes available.

A Quick Look at the Numbers

Numbers are always fun to look at but these numbers are staggering.

In addition to all of that, Canon is also bringing some of their beautiful glass to the game. The game will be viewed through a number of Canon broadcast lenses, including its flagship UHD-DIGISUPER 122x and UHD-DIGISUPER 111x box lenses. Both lenses are the first Canon 4K field zoom lenses to feature Canon’s proprietary Air Sphere Coating (ASC), resulting in reduced flaring and ghosting compared to previous lens coatings. ASC coating enhances both the HDR and Wide Color Gamut of the lenses, providing more natural and vivid tonality.

The CJ20ex5B will also be on-site. Following  stints in the NBA playoff bubble and the NFL regular season, that lens is starting to hit its stride. Last, but certainly not least, 8K lenses! CBS will be using the Canon 7×10.7 8K lenses for experimental purposes, testing them out and potentially using them for zoom extension opportunities.

There is much to say about all of the great technology that is unveiled at the Super Bowl, and I am convinced that this year will be no exception. But technology without great production professionals to put it all into play? Well, it’s just cool technology.

Don’t get me wrong I love technology, it’s even part of my job title. That said, there was one word that I heard and it came back time and  time again. That word is passion. Are you passionate about your productions and filmmaking? You should be. Gotta love what we do, because production at every level will test your creative problem solving and resolve. Especially when you are doing it LIVE with 20 cameras or 120 cameras with 600 plus of your favorite co workers. I guess that’s why I always loved directing the best. But this year I could hear it in every conversation and press conference, that strive for excellence. The camaraderie and attitude of hey, “We got this”.  From the first timer to the seasoned broadcast veteran, a real commitment and effort to try their very best. I’m excited to see what’s in store for Super Bowl 55.

You should be too!

*Images from NEP provided prior to plexiglass installation