Take a look at some free computer benchmark tests that are ideal for video editors. This is invaluable for when you build your next video editing computer.

Benchmark tests can be a great resource when building a new computer, or if you’re curious where your system stacks up against others on the market. The tests can also help you identify any weaker areas of your system that might be due for an upgrade.

What Is a Benchmark Test?

In short, a benchmark test is a way of testing your computer’s performance. After you run a benchmark test, you’ll usually get a score result. You can then compare your score with other system scores. The scores are coupled with the hardware specs. This allows you to see which hardware components directly performed the best.

An example of a benchmark test.

There are plenty of free computer benchmark tests available, but I wanted to focus on a few that I think are most relevant to video editors. Some of these test recommendations crossover to areas like 3D software and gaming. This is because video editing programs often require similar hardware specs in areas like the CPU and GPU.

Alright, let’s dive into the tests!

Cinebench is a simple-to-use CPU benchmark test from Maxon. The current version is Cinebench R20. Once you download and launch the app, you can run the CPU test. Before running any benchmark test, close down all other apps you have open, and leave the computer idle while it performs the test. 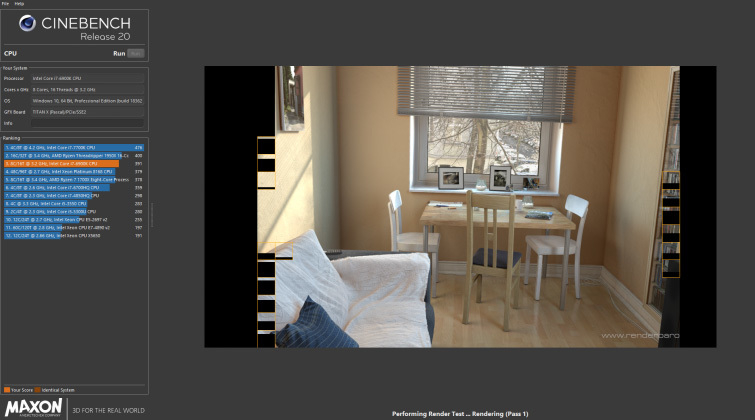 With Cinebench, you can see where your CPU ranks on the list.

During the test, you’ll see Cinebench render a test scene of a room with a window. On the left side of the interface, you can see your system’s specs and a ranking board for CPUs. Once the benchmark test completes, you can see where your CPU ranks on the list. Cinebench works on both Windows and Mac.

Blackmagic RAW Speed Test is a benchmarking tool that checks a computer’s CPU and GPU speeds using Blackmagic RAW footage. The test will check multiple footage resolution sizes at multiple RAW bitrate settings. After the test, you’ll see a green checkmark on various B-RAW resolutions that should work on your system. 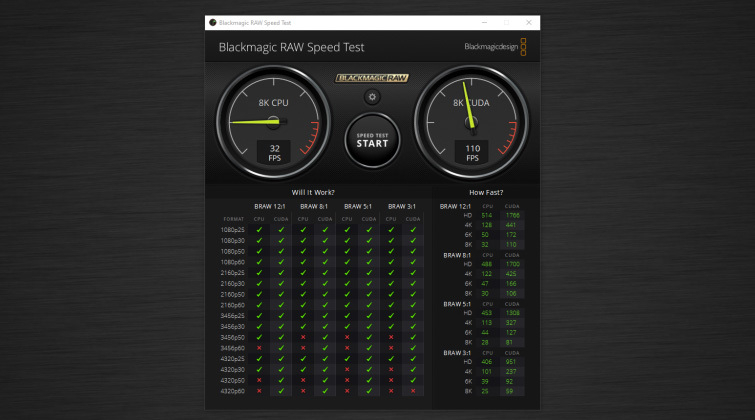 The results also show how many frames per second your computer can decode at all resolutions. The Blackmagic RAW Speed Test is a solid benchmark because the whole test runs in about one minute, and it tests both the CPU and GPU. The test is included when you download DaVinci Resolve, and works on both Windows and Mac.

Puget Systems is a computer-building company, and is regarded as one of the best for building high-end video editing computers. They’ve created their own custom benchmark tests for several popular video editing programs. Check out the full list of Puget System Benchmark Tests. 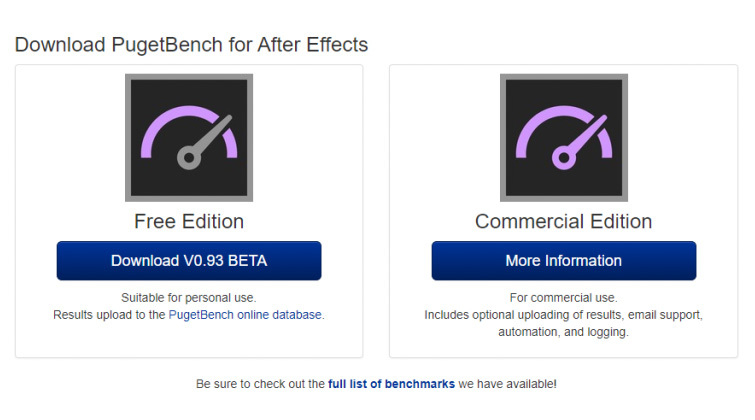 Leave your computer idle while you run your benchmark tests.

I decided to check out their benchmark test for After Effects. Once downloaded, you’ll need to install it and configure a few settings. (The benchmark is packaged as an Adobe plugin and must be installed before running the test.)

In After Effects, once the plugin is installed, just navigate to Window>Extensions>PugetBench for After Effects. This will begin the benchmark test and automatically run through several pre-built After Effects scenes. It’s best to leave the computer idle as it runs through the test. Puget Systems’ benchmarks can take a while, so keep that it mind. I typically run any PugetBench tests at the end of the day so it can take as long as it needs.

PugetBench is one of the top-rated benchmark tests for video editing.

Once the test is completed, you’ll see your overall score and some sub-category scores. Results are automatically uploaded online, along with system specs. You can then compare your score with several others on the Puget Systems Benchmark Database. This makes it really easy to see what systems are performing the best.

If you want to see more, check out the video where School of Motion teamed up with Puget Systems to build the “World’s Fastest Computer for After Effects.”

Speaking of benchmark tests for After Effects, Plugin Everything just announced AE Benchmark. AE Benchmark will test the CPU’s singlethread performance, CPU’s multithread performance, and the GPU. (Disk speed also plays a part, since each rendered frame will be saved to the disk before the next frame begins rendering.)

When the benchmark completes, you can see your score and compare your results with other users on the AE Benchmark website. AE Benchmark is estimated to only take about three minutes, which makes it an incredibly fast benchmark option.

Finally, by far the most fun benchmark tests are from Unigine, which are essentially like playing a video game. The tests will check performance and stability for hardware, such as: video card, power supply, and cooling system. You’ll also get real-time readouts for things like frame rate and GPU utilization.

Unigine’s latest benchmark test is called Superposition, which launched in 2017, and works on Windows and Linux. If you’re on a Mac, you can download their Valley benchmark test from 2013, which runs on Mac, Windows, and Linux. Both benchmarks are fun experiences. 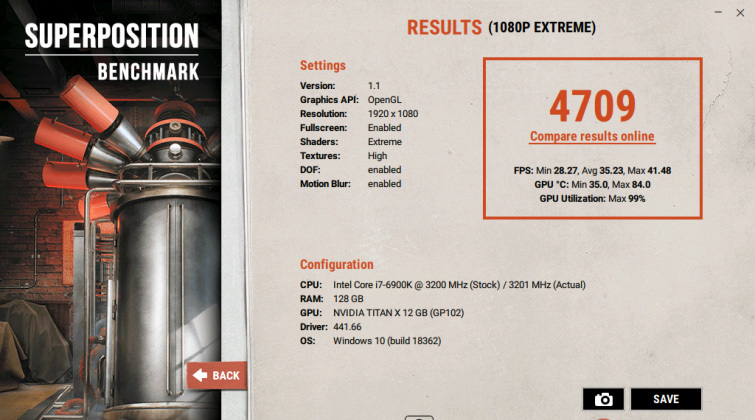 Superposition gives you real-time readouts for your computer’s performance.

Once you’ve downloaded the Unigine benchmark test you want to try, all you need to do is run the installer. Once it completes you can launch the app like any other program. From there, you can configure your settings and run the benchmark test.

For more inspiring tips, tricks, and guides, check out these articles: