Expanding and enhancing the fan experience at the game has long been a goal of sports stadiums and arenas. From over-the-top, wrap-around video displays to AI driven robotic cameras or the latest display monitors, today’s fans don’t want to miss a thing.

The highest levels of production value and delivery are what fans want and expect to see (and feel) when they come to the stadium. This is true for the best immersive game day experience whether in the “cheap seats” (Do they still have those?) or for the most luxurious sky boxes available.

Back In the Day 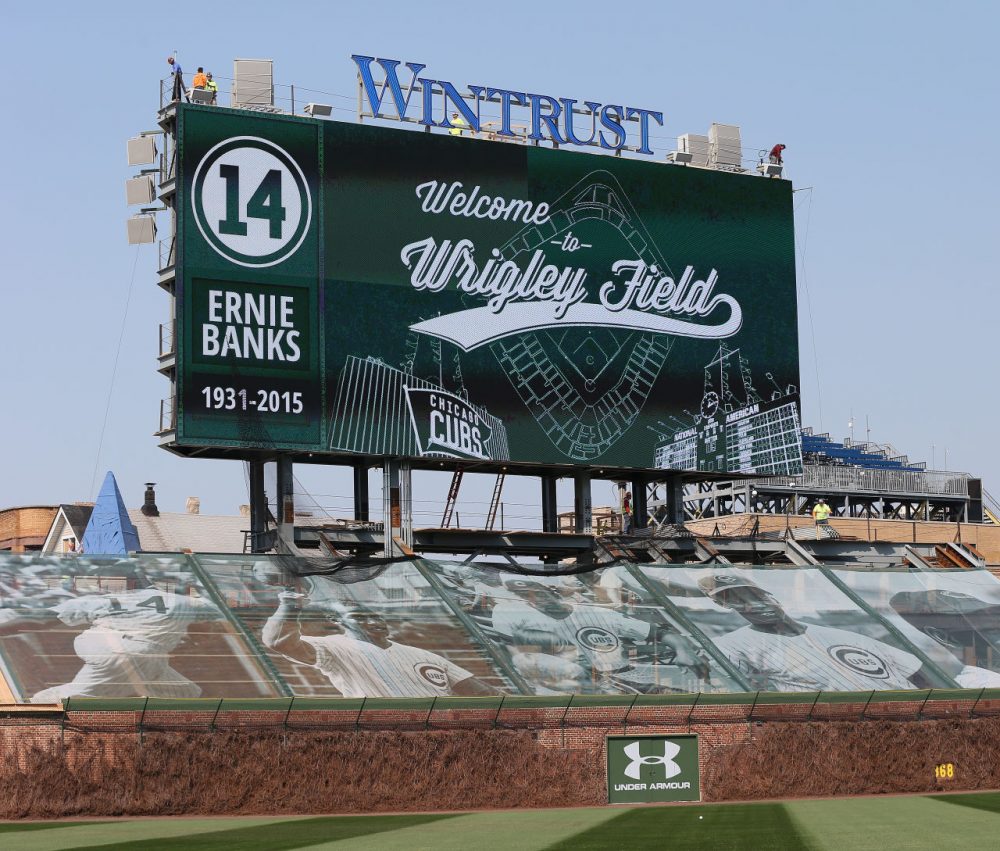 Video displays are nothing new to the world of pro sports and concert goers—dating all the way back to the early 1980’s with the introduction of the Jumbotron display. The jumbotron, sometimes referred to as “jumbovision”, was a video display system using large-screen television technology. The original technology, developed by Mitsubishi Electric and Sony, coined JumboTron as a brand name. Mitsubishi Electric sold their version of the technology as Diamond Vision.

For the time it provided quite the “wow” factor. Up to this point fans at the game did not have the luxury of “instant replay”. Can you even imagine going to a game or concert without some form of video today? Probably not.

Control Room technology at the time was also fairly rudimentary and came in the form of mostly a few ME Grass Valley switchers, Chyron Graphics, and maybe a 20 input audio board. The Jumbotron was a technological marvel for its time and fans quickly took to the idea of seeing the action in the form of replays either from network feeds or shots from one or two cameras operated in house. Image 3

Today, the creation and demand for game day elements, large display technology, and in-house entertainment has grown exponentially as venues see value in amping up game and event experience. Personally, I still get a good laugh when players watch themselves running down the field, or witnessing the “kissing cam” in action at an NBA game. Some of the “kissing” camera fails are always pretty hysterical. But getting all that great content to the fans depends on a lot of advanced technology to make it all happen.

Designing to Scale, Points to Ponder

When you are getting into design parameters this deep, the big guns (manufacturers) integrators, and equipment distributors like Broadfield Distributors are right there with you. Sony, ROSS, Daktronics, Marshall, and Panasonic are there too. We are talking truckloads of gear. Think about these install points on your to do list: 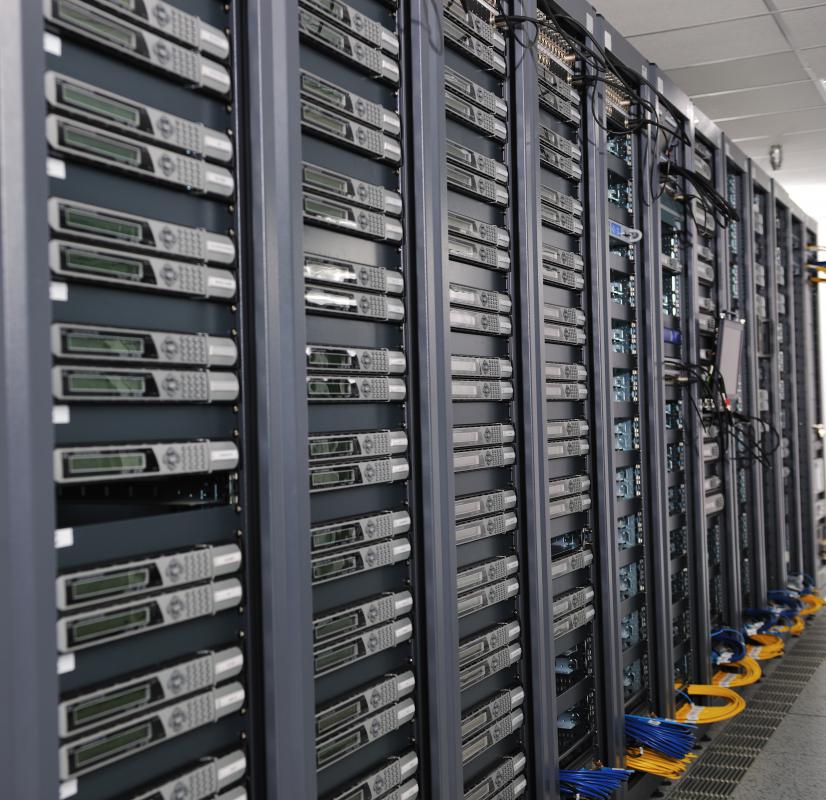 For starters you are going to have to move huge amounts of data to every place in the stadium. Everywhere from the owner’s box to the monitors outside the concession stands. Things like video, audio, graphics, and intercoms, all have to get from point A to Point Z. We have had to even route in house feeds back out to the remote truck. Thousands of data streams to account for. Can you imagine trying to do this build out without fiber? Have you hugged your engineer lately? So much planning goes into project development, and we are talking years. Honestly, it gives me a migraine headache just thinking about it. 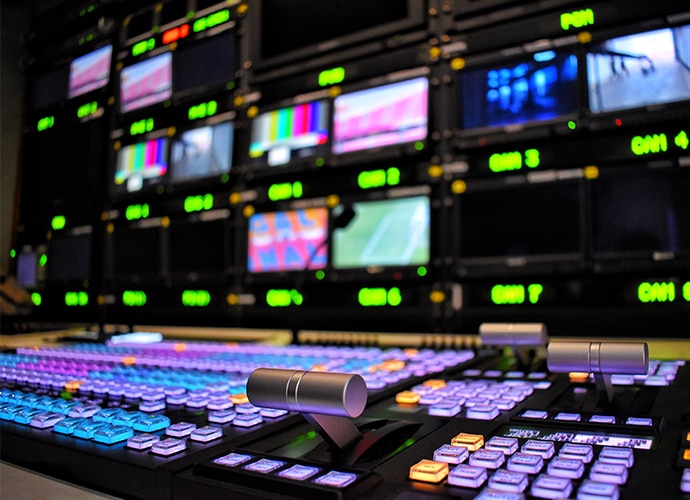 I know what you are thinking. Why not just take the network feed? Of course, you are going to do that, but how about all the other things going on. Pre game, Post game, making the half-court shot at halftime,  on field entertainment, and presentations—are all elements that are part of the experience I am talking about.

In-house production needs a robust and stout switcher, maybe even two. Think of the biggest and best switchers and cameras made by Sony, JVC, Ross ,Grass, Panasonic and Broadcast Pix (to name a few.) Throw in multiple wireless cameras on field along with robotic and operated fixed positions and hopefully you are getting the picture of just how big the scale of designing and the build out really is.

Here are some great examples of taking technologies to a whole new level. 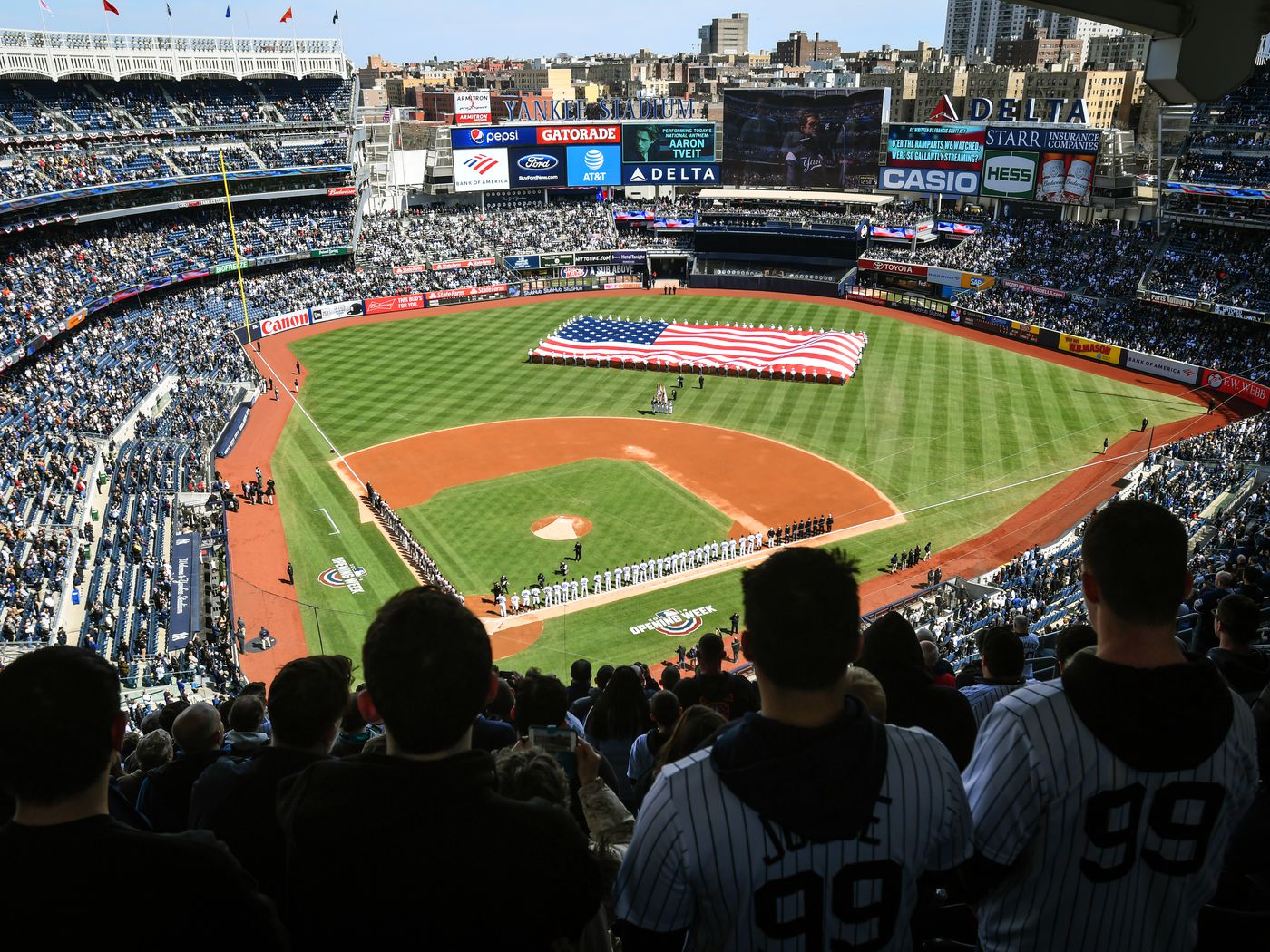 Sony delivered a full HD broadcast control room in the new stadium of the New York Yankees, providing cameras and camcorders, production switchers and decks to produce images that are fed to the huge LED board in centerfield—and to more than 550 flat-panel BRAVIA displays throughout the park.

In the luxury suites, sport fans can take a break from the game with PlayStation systems, available to the public. Sony has transformed the Yankees Stadium into one of the most modern and technologically-advanced sports venues in the world.

The San Francisco 49ers chose Sony F55 4K cameras to take their in-house production capability to the next level. At 49ers Studios, content is created for the team’s website for two television broadcasts—Forty Niners Wah and The Faithful—that made their debut in September 2014, most visibly for Levi’s Stadium, home of the 49ers. “In our first year of operation, and with new cameras on our producer’s shoulder, the first phase of our plan—digital video and 49ers.com—skyrocketed to the top of the NFL charts. 49ers.com ranked no.1 on the NFL platform at video in content, traffic, and engagement,” says Robert Alberino, Executive Producer, San Francisco 49ers. 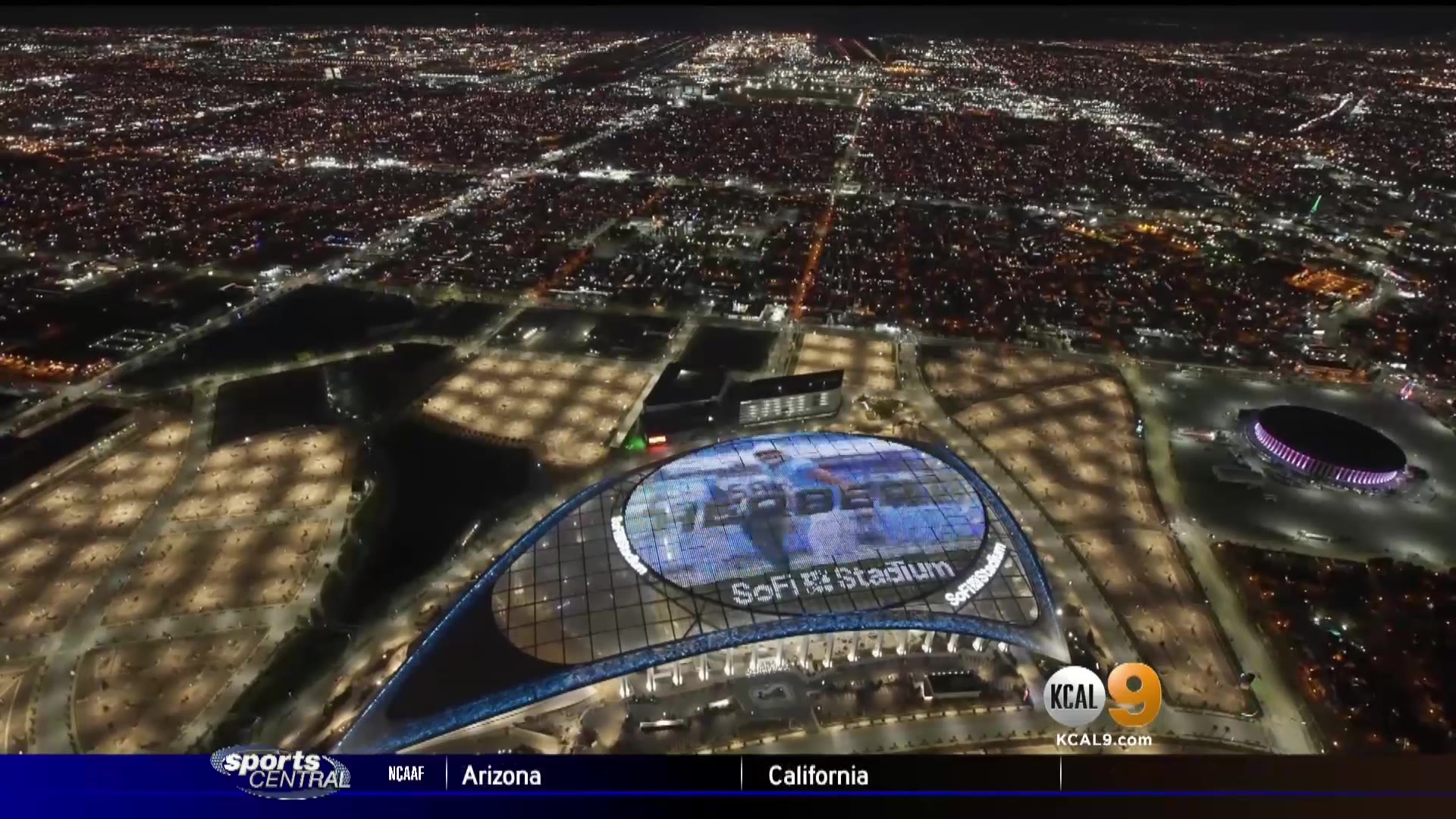 The Infinity Screen features the most LEDs ever used in an entertainment venue or a sports stadium. It is also a part of the only end-to-end 4K video production system ever used in a stadium.

The ovalesque (my description) display is installed 122 feet above the playing field and features 80 million pixels. The pixels are placed 8mm away from each other, and each panel on the display is arranged in such a way that it can display animated or live content, statistics, and graphics.

As if The Infinity Screen by Samsung wasn’t enough—SoFi also has the first of it’s kind roof that is also a video display surface. The roof canopy of SoFi Stadium has been built using a fluorine-based plastic called ETFE and features the largest cable net system in the world. The translucent roof spans 1 million square feet and LED lights project images onto the roof, making it a screen that’s visible both inside and outside the stadium from the air. Meaning both visitors in their seats and airline passengers above the stadium, have a view.

Lastly, the SoFiControl Room boasts not one, but two ROSS Acuity switchers, which can be configured to run tandem or solo even punching the same show running at or streaming at the same time differently. If I had to guess there might be some friendly TD competition going on there, right?

Mercedes-Benz Stadium claims to have one of the largest video boards in professional sports and the stadium is designed to give fans the ultimate memorable experience.

With 2,000 TV screens around the concourses and a state-of-the-art audio system, chances are pretty good that one will never miss a play. There are over 1,800 wireless access points, 4,000 miles of fiber, optimized cell service, and a mobile app designed to be the stadium remote control.

The centerpiece, one of the largest video boards in professional sports, is 63,000-square feet of 360-degree HD video screen to view live action, highlights, and iso-cameras. Checking in at 58 feet tall, this board allows for a truly redefined in-stadium experience.

Why can’t a local Triple AAA ballpark have all the same cool production and delivery values as any other ballpark? Of course they can!

Truist Field, home to the Charlotte Knights is a prime example of how stadium enterprises are approaching fan engagement. With a capacity of 10,200 Truist Field (a scant 7 years old) has embraced technology to provide a memorable visitor experience. We caught up with Cameron Moist, Director of Video Production, who filled us in on the Truist Field set up.

“In-house productions are extremely beneficial and important to fans and the sports realm. The marketing and ticket departments all do a great job of getting people to the ballpark, but it is our job, as in-house productions, to keep them entertained and informed during the game while also giving them a reason to want to come back for future games.”

Moist adds: “We use two Broadcast Pix Granite Switchers, one for in-house and one for our broadcasts on MiLB.TV We have six cameras that we use for our games, five of which are JVC Pro HD Cameras. (1st Base, High Home, 3rd Base, Centerfield Camera (PTZ Camera), and two wireless cameras. We also use an Allen & Heath QU-16 sound board. We have approximately between 80-90 monitors in the ballpark that includes the suites, concourse monitors, and other various monitors throughout the ballpark.”

To me, there is still nothing like being at a live game or event. Being a homer, I am talking about Fenway Park or Gillette Stadium of course. If I was in a luxury suite? I would want to see all of the entertainment or replay action on a big bad OLED Sony BRAVIA, in 4K HDR. Who wouldn’t?

That in person experience along with all of the enhanced technologies? We have brought expectations to a whole new level. I can’t wait to see what is next!

Mark J. Foley, MBA BA is an award-winning producer and director and the Technology Editor for ProductionHUB.com. He is on a mission to provide the best in new equipment reviews, along with exclusive analysis and interviews with the best, the brightest and most creative minds in the entertainment and production business. Have a suggestion for a review?