Cinematographer Alicia Robbin’s work can be enjoyed on the latest season (17) of ABC’s iconic medical drama, Grey’s Anatomy, airing weekly on Thursdays at 9/8c. Robbins, who previously shot Season 16, is Shondaland’s first female cinematographer and the only female DP to date for Grey’s Anatomy.

With the latest storyline incorporating COVID-19, the crew was free to shake things up and change the overarching look of the series – with the main goal being to use more color in Seattle’s Grey Sloan Memorial Hospital. Updating the set to reflect how real-world hospitals use circadian rhythms to light wards and offices, the crew incorporated LEDs to achieve this goal.

PH: Hi how are you? How has your work changed over the past year?

Alicia Robbins: I am good, thank you!  Been a busy year.  I know a lot of people have not been able to say that during the middle of a pandemic, so I am incredibly grateful that I had an opportunity to shoot a very big TV show in the middle of it all.  For me, that has been the biggest change over this past year is dealing with the changes on set that we had to implement in order to keep everyone safe during Covid.  Going from the normal 12-hour work days to 10 hour days but still shooting almost the same amount of content, all the while being in a mask and face shield the entire time.  It brought so many things that you take for granted to the forefront, such as being able to hear people clearly to communicate on set or even grab a sip of water on set!  This was a big challenge, but I adapted and so did the crew.

PH: How did you get involved with Grey’s Anatomy?

Alicia Robbins: I first got involved with Grey’s Anatomy towards the end of Season 15 when they were looking to hire an additional DP to shoot two of their stand-alone episodes.  Stand-alone episodes are episodes that are shot simultaneously on top of the main unit schedule and are like mini-movies.  To do this, a whole new crew has to be hired.  I was working on For the People at the time as an additional DP and my producers there referred me for the job at Grey’s. I also was able to bring over the crew from For The People to help with the episodes. So, I shot two episodes for Season 15.  One being 1519, “Silent All These Years,” Directed by Debbie Allen, and has been listed as one of the most powerful episodes of Grey’s Anatomy to date!  From there, they asked me to stick around!

PH: You’re the first female cinematographer and only female DP to date. How important is this for the industry? How do you think it adds to the show?

Alicia Robbins: I was surprised to learn that I was the first female DP to be hired on a Shondaland series, but I’m very happy to carry that torch! I believe that me being hired at Grey’s was a very big step and representative of what needs to be done everywhere.  Debbie Allen, knowing that I had only just begun making my way in big TV, saw the ability I had and took a leap of faith in giving me those two episodes in season 15.  But I know that for many men DPs, this leap of faith in terms of hiring “new” talent happens all the time.  But for whatever reason, it seems to be a harder sell for a woman to get hired if she is “new”.  And this has to change.  It’s producers like Debbie who have the power to help make that change and there needs to be more of that in our industry.  Because we all know, women have to work so much harder for the same job, and you bet that woman DP is going to do everything in her power to knock it out of the park! 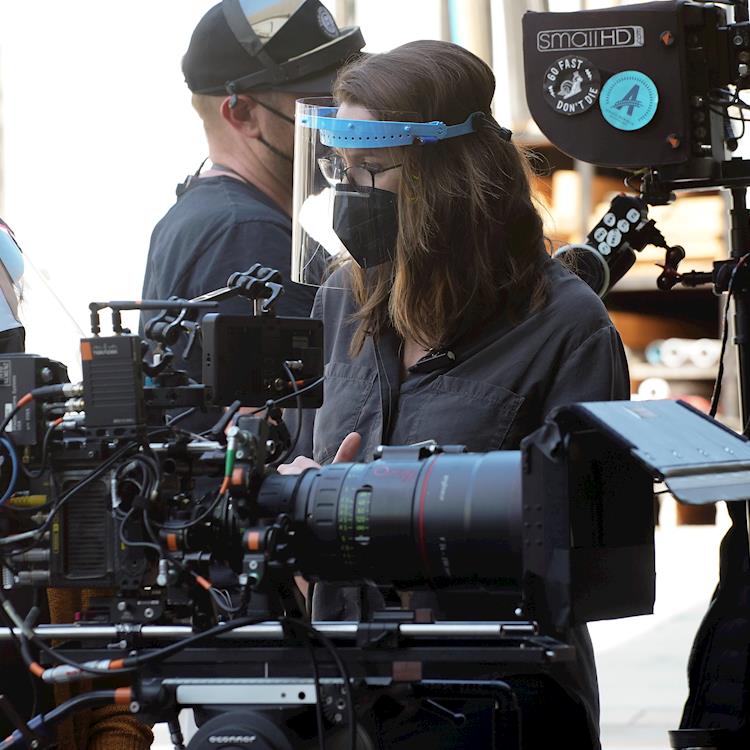 PH: Coming into the latest storyline having to incorporate COVID-19, what were some of the challenges you faced?

Alicia Robbins: One of the biggest challenges was how to light the actors in PAPR.  PAPR is a fully protective hooded PPE that has a clear face shield.  These were the preferred prop for the actors to wear because we could see their entire face through the shield.  However, this made it incredibly difficult for lighting.  There was only one good place to put the light to get light on their faces without creating a very harsh reflection.  Luckily our props department worked very hard to install anti-reflective clear material that helped a lot.  But even still, this posed one of the biggest challenges of the season.  Also, many more sets had to be created outdoors.  To help with Covid safety protocols, more outdoor locations were incorporated into this season so we could have actors without masks.  This included the famous beach sequences that were so popular this year with actors returning from past seasons such as Patrick Dempsey.

PH: How about opportunities? It’s interesting to see a show set around doctors’ deal with this very real pandemic.

Alicia Robbins: It was one of the only shows that was truly addressing the nightmare that occurs inside the hospital during Covid.  Because no one could visit loved ones in the hospital in the real world, this was an opportunity for people to get a glimpse of what it is like inside the hospital during this time.  Obviously, Covid was a big storyline, but we also included trauma storylines that Grey’s is known for, and how that is also dealt with during Covid.  It was fascinating.  And as we shot, we were learning along the way as well about Covid as things changed around the world.

PH: Can you talk about some of the set updates you implemented?

Alicia Robbins: There were a few key things that changed this season.  Overarching season look for the lighting was to apply more color into the hospital.  Knowing that our storyline was going to incorporate Covid, it gave me permission to shake things up a bit and change the look. I actually talked with the producers about how modern hospitals are incorporating circadian rhythm into their lighting design with the use of LED lighting.  And since we moved almost all of our lighting to LED this season, we were able to use this theory.  The theory being cooler lighting in work areas where doctors and nurses need to stay alert, and warmer tones where patients are resting or sleeping.  Sometimes going a very deep warm color for night time sleep areas.  And the lighting adjusts depending on what the patients are doing or the time of day.  This being an overarching theme for the entire season.  The LEDs really played a key role in our Covid safety protocols as well.  We had all of the lights that were closest to actors almost exclusively LED.  Since every unit was controlled through the DMX lighting board, we were able to make last minute exposure or color tweaks on the fly after the actors had stepped onto the set.  In previous tungsten days, we would have to go in with a ladder and drop or remove a scrim to not affect color temperature.  This really helped speed up minor adjustments on set.

PH: What types of shooting techniques / methods did you incorporate?

Alicia Robbins: For camera and movement, we were working with specifics that required a new way of working during Covid.  We needed to keep our camera operators separated, but also almost always shot with three cameras to help get the coverage needed.  To do this, we used the brand new (first in the US) Scorpio 17′ telescoping crane, provided by the Crane Company, full time on the show for our A camera so there was always a distance maintained with the arm.  This allowed us so much more freedom in movement in small spaces so we could get more creative with our shots.  For the B-camera, it was operated from a remote head on a dolly, so that only the dolly grip was occupying the designated space, and then C camera generally lived on a longer lens to maintain distance from the actors and was usually off-set from any of the other cameras.   But because we had A camera almost exclusively on the crane at all times, it really shook things up in terms of how we could move the camera.  We no longer were reserving our cool jib moves for the days that we had the crane.  We could incorporate a dynamic move into almost every scene if we wanted to! 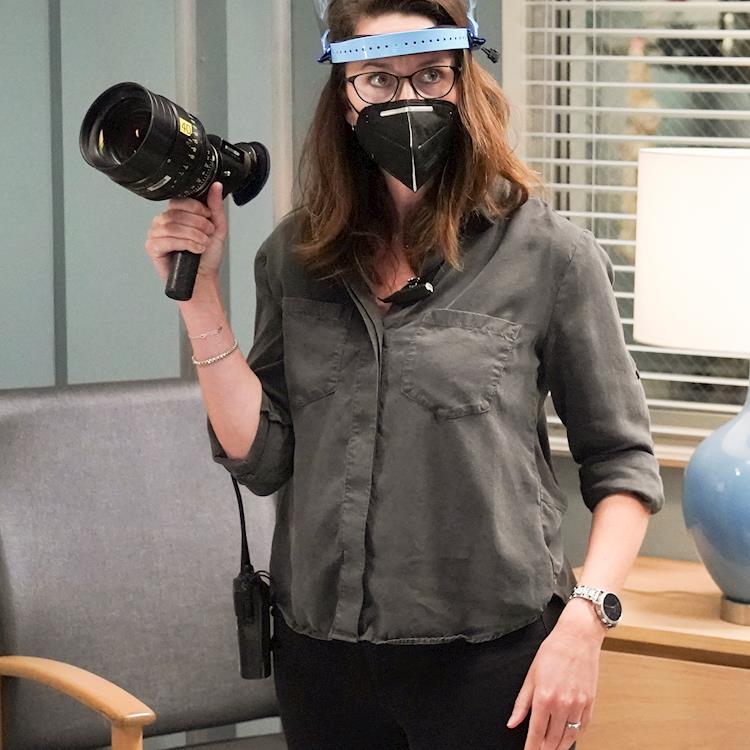 PH: Can you talk a bit about the equipment you used and why?

Alicia Robbins:  Oops, I think I already dived into this a bit above. 🙂 We use Arri Alexa Minis as our main cameras.  We upped the resolution to 3.2K this year as well as changed our filtration package to Hollywood Black Magic diffusion.  We stuck with the Cooke S4s as our main lenses.  They are tried and true and helped keep a consistency with the previous seasons.  Also, there were a couple of other new items that were incorporated that hadn’t been used before in previous seasons.  Because there was so much on camera FaceTime or Zoom calls, I wanted to make sure that we still had a quality picture that could be burned in or even seen live on the day, so I did start using the Panasonic Lumix S1H for these scenes.  It also came in handy when I needed to do a car rig for episode 1712.  I needed a super closeup shot from inside the car that was stabilized, and the S1H having really amazing internal stabilization, we were able to use it for some of the driving work.  Also, another piece of equipment that I brought to the set was the Rotolight Titan X2.  It’s a beautiful LED that actually has a smart diffusion effect where you can dial in or out the level of diffusion through DMX.  Again, for not having to have a crew member go onto set to make an adjustment, this was a pretty cool tool to use on the fly.

PH: Do you have a favorite scene(s)?

Alicia Robbins: I absolutely love the beach sequences that were done this year.  They were some of the hardest to shoot, but I truly love the way they turned out.  Also, there is a beautiful night rain scene with Teddy and Tom Koracick in 1704 that ends with a shot of Tom crouched against his door as he begins to truly suffer from Covid symptoms. The rain shadow play on his face and door I took influence from the movie “In Cold Blood” (1967). Between Gregg Germain’s acting and the rain shadows on his face, we really feel the pain of what this virus does to people.

PH: How do you think your role will continue to evolve? What are your thoughts on the future of the industry?

Alicia Robbins: I hope that I can continue to elevate the cinematography in any project I’m attached to.  I’m always looking to enhance the story and characters through what I create in camera.  And I hope that my role as a woman cinematographer continues to inspire future generations of women DPs to embark on this journey.  As for the future, story content is constantly being heightened and pushed to the edge.  Technology is constantly evolving and making our industry more challenging, yet sometimes easier.  I really look forward to seeing how we push the boundaries on story and use our technology to help serve those stories.  It’ll be fascinating to see what comes in the very near future.