Co-director and co-editor Pippa Ehrlich takes us behind the scenes of the stunning documentary and shares her journey to making the film:

How and where did you first learn to edit?

I’ve been making films since my time at Rhodes University in South Africa. I specialized in documentary filmmaking. At the time, Premiere Pro was not the most popular tool in the business and many professionals were still using Final Cut or Avid, but for some reason our school chose Premiere Pro and I am so glad they did. A lot of the early edits we did were just short news pieces, but for our final project we had to deliver a 24-minute documentary — even back then it was clear that being able to integrate various creative tools across one platform was invaluable.

How do you begin a project/set up your workspace?

I have been using Premiere Pro for so long that I generally just stick to the standard editing workspace set up and make sure that the Program monitor is full screen. On this project, we had a lot of hard drives to juggle which got frustrating and so at a certain point we had to package the project and relink files later. Most of the edit happened from Craig’s [Foster, subject and producer] attic, so we didn’t have a lot of room to work with. In my edit suite at home, I try to have almost nothing on my desk, because it gets distracting, but I do rely on post-its a lot!

Tell us about a favorite scene or moment from this project and why it stands out to you.

It’s hard to pin-point a specific scene. In the early part of the film I love the sequence that James Reed (my co-director) refers to as the “Avatar scene”. This is the part of the story where Craig is getting his purpose back and really starting to discover the sea forest again — a feeling he had felt cut off from since childhood.

If I go back to the edit though, I have to say that the scene that really stood out while I was cutting it was the sequence that covers the final phases of The Octopus Teacher’s life. We were always aiming to cut 3 minutes per day, but this scene was so powerful I think I charged through about 10 minutes in an afternoon, and when I showed it to Craig and his wife Swati, they were both brought to tears. There is something so poignant about the bitter-sweet moment when Craig observes the octopus playing with the fish and then she climbs on top of him for the last time. This is followed by the heartwarming and heartbreaking story of how she completes her mission to reproduce, but gives up her life in the process. Something about this part of the story (perhaps it’s obvious because the themes are so powerful and universal) just worked, and we actually used it as a kind of bench-mark when assessing the tone and feeling of other sequences that we had cut.

What were some specific post-production challenges you faced that were unique to your project? How did you go about solving them?

Post-production was a huge challenge generally. For a start, we were working with a host of different camera formats, frame rates and resolution sizes. We were warned by online editors that post and QC were going to be a nightmare and that it was going to take weeks to get right and cost a fortune. Also, because of the volume of footage we had to contend with, we were operating across 4 or 5 hard drives. At first we went straight to Baselight and the colourist Kyle Stroebel and I had a couple of very intense and scary days trying to relink things and get timings right. It very quickly became clear that that wasn’t going to work.

At that point we were rescued by a machine of an online editor called Dani Nel, [who spent 3-4 days re-syncing the project] and exported to Baselight. It was a stressful week, but amazing what you can do when you combine the right human skills with good creative tools.

The film was made with an organization called the Sea Change Project. What Adobe tools do you use for your work and why? Why were they the best choice for this project?

Sea Change Project is a media advocacy organization which relies on Adobe tools to produce our content. From our book, Sea Change (The Underwater Wild) which was laid out in InDesign, to all of our imagery which is archived and edited in Lightroom and Photoshop, design work in Photoshop and finally all our video material which is edited in Premiere Pro. The seamless integration and workflow between Adobe tools made it the obvious choice for the work we are doing. My Octopus Teacher has been the biggest project we have undertaken using Adobe tools, and it definitely benefited from the ease in which footage can be organized — we were dealing with thousands of hours — the ease of processing and working with proxy files via a dynamic link to Media Encoder, the layout of the timeline and ability to easily play with a variety of tracks, as well as its strong focus on a team user-experience.

I think the most important thing always is how a tool feels to you. Because I have been using Premiere Pro for so long, it was an obvious choice for me, and when the edit had to move to other parts of the world and Dan Schwalm took on the job for a while, the program was equally familiar for him.

What do you like about Premiere Pro, and/or any of the other tools you used?

Stills and video are our primary ways of communicating the beauty and awe of the Great African Seaforest, but the raw capture of these two mediums is only half the work. Being able to bring our raw image files into the likes of Lightroom with its intuitive workflow and high-powered color-correction tools, we are able to archive thousands of images so that they are easily accessible, and processed to bring the life and full power back into the images we have taken. This is equally true of the video we capture. In My Octopus Teacher, we were super impressed with the color-grading function that allowed us to be able to match multiple cameras and varying water conditions. Although we used Baselight for the final grade, we need to get a sense of what could and couldn’t work next to each other during the edit and it was brilliant to have a quick and user-friendly way of figuring that out.

There are so many hacks: Keyboard shortcuts save time and become muscle memory — nesting is super useful for keeping a timeline clean — Time-remapping and easy keyframing give you a lot of creative freedom. Time-remapping has been a super powerful tool, especially underwater where animals and water movement have to be sped up or slowed down. While it doesn’t always work, warp stabilization can be super effective as well — especially as underwater almost everything is handheld. Of course a super obvious one is that working with proxies and using dynamic linking to Media Encoder just makes things way more efficient.

Who is your creative inspiration and why?

Again, it’s hard to bring it down to one person. This was my first big film and I learned so much from the more experienced filmmakers that I worked with. Craig Foster showed me how powerful it is to think outside of the box, follow your passion and harness raw elements to create something magical (he had amazing ideas like creating sounds from dried kelp stipes and using those to create music). James Reed has an amazing modern style that makes everything slick and cohesive. Jinx Godfrey, our edit consultant had a phenomenal sensitivity and thoughtfulness that really helped us to hone the story down to its most essential parts. With regards to an outside inspiration, I have been listening to a lot of Werner Hertzog recently and love what he says about the “ecstatic truth’: Often in storytelling you are trying to share a meaningful sequence of events, but more than that, you are trying to express a feeling and a message. We had a totally immersive approach to making this film and as much as we wanted to share Craig’s story, we hoped to give viewers a glimpse of how it felt to have those experiences. That is the magic of filmmaking and perhaps especially editing — it’s a kind of alchemy between sound and image that transports people beyond the boundaries of what they think is possible.

What’s the toughest thing you’ve had to face in your career and how did you overcome it? What advice do you have for aspiring filmmakers or content creators?

Certainly as an aspiring filmmaker in South Africa, the toughest thing was just getting an opportunity to show (and especially show myself) what I was capable of. It’s hard to know where to start in this industry and before I got this opportunity, I was close to giving up. I was incredibly lucky to meet Craig and even luckier that he had the confidence in me to bring me onto this project. I think it’s important to keep making films and honing your craft and pushing yourself creatively, but finding mentors that can help you navigate the industry and keep encouraging you is essential, no matter how talented you are and how good your work is.

What’s your favorite thing about your workspace and why?

Of course all our editing is done at a computer, but our team works across all the disciplines of filmmaking. We work in the Great African Seaforest and it is a filmmaking dream. The light is always dancing underwater, you never know what you are going to come across and we are out here everyday, always looking for an opportunity to grab a shot that might enhance a sequence that we are building in the edit. 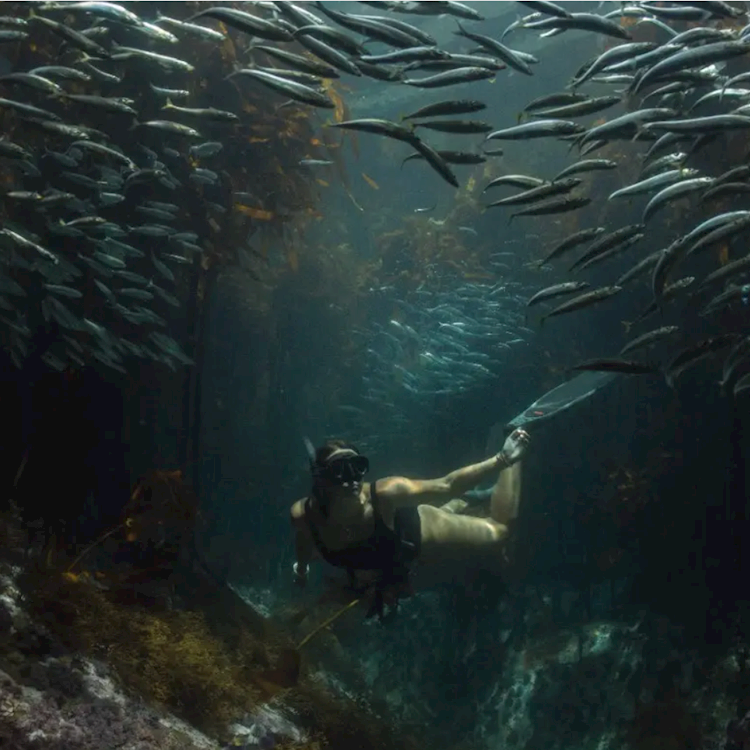