Let’s take a closer look at a few different frame rates and how you can utilize them in your film and video projects.

Frame rate, also commonly described as frames per second (fps), is a term used to describe how many still frames we see in a single second. As a filmmaker, it will be one of the first settings you choose — 24, 25, 30. Universally, 24fps is accepted as the norm for a “cinematic” frame rate. 30fps is accepted for broadcast in North America, and 25fps is the broadcast standard in Europe.

In the one-second sequence below, several individual frames pass each second. To be specific, there are twenty-four individual stills.

Below, we have the shot split into individual frames, each representing 1/24th of a second.

The question for this segment: Why 24? I find it incredibly useful to know how a clock ticks rather than just knowing what it does. Why not 22 or 28.59? Why are we given these exact frame rates to work with? Many filmmakers opt for 24fps because it is the standard fps for making your films feel “cinematic.” However, cinematic is just a relative term for what we think looks normal.

You may recall many articles published in 2013 talking about how The Hobbit films looked like cheap daytime television dramas. This was because it was shot at 48fps, giving us an entirely different aesthetic.

Why we shoot at 24fps comes down to many reasons, and from years of reading and research around this topic, there isn’t a specific one. It is a compilation of various factors.

We can perceive ten to twelve passing frames as distinct individual images. As more images pass each second, the gap between each image shortens, and our brains recognize the images as motion. This was first documented by psychologist Max Wertheimer, who coined phi phenomenon.

Although greater frame rates would produce better persistence of vision, 16fps became the unofficial standard for silent films. It was enough to create the illusion of motion, and studio execs were not losing cash with every turn of the hand crank.

There are a few variations of why 24fps was specifically chosen. In the video below (from Filmmaker IQ), John P. Hess explains that 24fps was chosen because a new modern standardization of frame rate had to be initiated due to the introduction of sound.

24fps was chosen because of math; it is an easily divided number, and editors can work out specific time cuts based on the number of frames. Twelve frames would be half a second; six frames would be a quarter of a second, and so forth.

While silent film was able to entertain the masses, filmmakers still wanted to push their new medium further. They wanted the audience to hear the spoken word like theater. Plus, the introduction of household radios offered new and exciting stories that cinema and theater could not. The pioneers of filmmaking had been trying to synchronize sound since the early 1900s. In the 1920s, they had their first breakthrough.

In the beginning, inventors such as Lee de Forest attempted to record and synchronize sound by transferring the vibrations of sound waves into etchings on a soft wax disk. Unfortunately, it was very easy for the sound to fall out of sync because both visual and audio had been recorded separately with different recording speeds.

This was a bust for de Forest, but he later went on to invent the Phonofilm, in which the method of recording an optical track alongside the film strip was introduced. The technique made it physically impossible for the two to fall out of sync, as they were in the same format.

You can watch a video by Encyclopaedia Britannica Films explaining exactly how this phenomenon of printed sound is achieved.

Throughout the 1920s, various inventors and filmmakers continued to push both recording mediums. De Forest improved the audio quality with his Phonofilm, while Western Electronic and Warner Brothers were pushing boundaries with the recorded disk format with the Vitaphone, seen below. 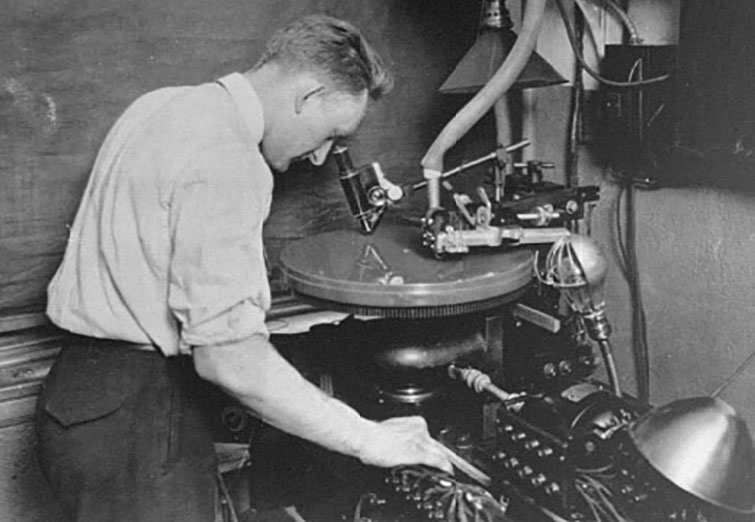 The Vitaphone, however, was about to set to path the way for frame rate standardization. To overcome the synchronization issue that de Forest had with his disk format, the Vitaphone had the discs and the film projection both mechanically driven by synchronous electric motors powered from a common source. This made it much harder for the sound to fall out of sync.

The engineers of the Vitaphone system had chosen to use the sixteen-inch disk format at a playing speed of 33 1/3 rpm. Rotating at 33 1/3rpm would give the disk eleven minutes of playing time, which was the same amount of time that 1000 feet of film would play at 90 feet a minute: twenty-four frames per second.

Different methods of capturing sound were set with various frame rates of film. That was set to change in 1927.

The following passage is taken from Moving Image Technology: From Zoetrope to Digital:

The standardization of identical shooting and projection speeds was the first significant effect of the conversion to sound to be felt. Whereas the reproduction of movement can, in some cases, vary over quite wide limits without the effect being perceived by the untrained eye, the reproduction analogue audio cannot, for the simple reason that varying the speed of playback of a recording also varies its pitch.

In September 1927, the SMPTE’s Standards and Nomenclature Committee undertook a fact-finding exercise in order to establish what speeds the emerging sound systems were using. The two which were entering commercial use (Vitaphone and Movietone) both used 24fps. THE RCA variable area system, still in development at this point, used 22fps, while de Forest Phonofilms (which had virtually ceased production by that point) ran at 20fps. Accepting that, trends in exhibition practice over the previous decade and decisions made by the designers of two the most successful sound systems had effectively standardized 24fps by default.

So, we could say that 24fps is the default solely because Vitaphone had reached the finish line first with 1927’s The Jazz Singer. If it had not, 22fps might have well been the norm for shooting.

Shutter speed and frames per second inevitably get mixed up by those new to the medium. Although separate components, they both work in unison. While frame rate dictates the number of frames exposed each second, shutter speed dictates how long that frame is exposed.

The rule of thumb for cinematic/smooth-looking footage is to set your shutter speed to double the frame rate. This will give you an 180-degree shutter, although this term is a conceptual term for when rotary shutters would advance a frame with each rotation. Therefore, if your frames per second is 24, your shutter speed should be set at 1/48. Some lower-budget cameras don’t support the ability to choose 1/48, but 1/50 will be just as okay.

How to Use FPS to Aid Your Film

How can you use frames per second to aid your storytelling? Of course, the most common practice would be slow motion. An older term for slow motion is overcranking, a reference to the days of Lee de Forest, where the camera operator would crank the film faster to increase the number of passing frames per second. This was first pioneered by August Musger in the early 20th century.

The diagram above represents half a second of footage at 24fps. When shooting at double the frame rate — 48fps — you are capturing an entire 24 frames in a half-second. The slow motion is produced by then interpreting those extra frames into your standard frame rate.

Undercranking, as you might have guessed, is the reverse of slow motion; it is the form of fast motion. However, the act of slowing down the frames per second has essentially become what we now know as a timelapse. Taking stills and conforming them to a motion sequence is far more cost-effective than doing it with film stock or a cinema camera.

The technique of undercranking to speed up characters for dramatic or comedic effect has died down. Unlike the days when film would be shot at a slower than normal frame rate and then sped up, many filmmakers can now film at 24fps and increase the speed of the footage in post.

Hopefully, this in-depth look at frame rates was helpful. For more cinematography tips, check out the articles below: