Jay Chaudhry: Thanks! DJ was actually one of our first athlete investors and has been with us since the launch of the company. He’s always been vocal about bringing awareness to healthy eating and staying in top form, so the focus of the series was to show a true reflection of who he is off the court.

PH: How did you plan out what each of the episodes would cover? What went into the planning as a whole?

Jay Chaudhry: We knew going into pre-production that we wanted to focus on individuals who were not only talented cooks, but people who would be able to bring out the curious and humorous side of DJ. Our research and talent coordinators were extremely meticulous about who we wanted to showcase. We ended up with a pretty cool list including celebrity chef Guy Vaknin (Hells Kitchen) Chef Shelly Flash (Masterchef) and TikTok legend Joanne Malinaro.

One of the things I really wanted to come across authentically was the backstory of the chefs. All of them have an incredible story on their journey to healthy eating so we packed these storylines in as features — which were then threaded and intertwined within their episodes.

PH: You had to shoot all 8 episodes in a very short period of time. What was that like? What were the challenges working with schedules?

Jay Chaudhry: Planning. Planning. Planning — And even with all the planning in the world, we still hit plenty of interesting challenges. One of them being hiring local production staff in between us traveling. Not only were we looking for a talented crew, but could only confirm those who either fully vaccinated or tested negative within a 36 hour window from production.  Maintaining a safe set was very key for us. The actual filming of the episodes involved — (in my own words) a very militant style approach. Each chef would come in during a certain time block and were immediately sent into a prep kitchen where they would prepare all the ingredients needed for their episode. As soon as a taping completed, we’d literally wheel in the next cart to set and roll. I will admit, there was some concern we might tire DJ out but in between the music, live action and awesome atmosphere, he was actually very supportive and willing to put his best work forward. Its that pro-athlete over drive setting perhaps, haha.

PH: What are some of the biggest lessons you learned?

Jay Chaudhry: An extra battery, memory card, light stand and duct tape go a long way when the moment calls for it, lol. Keep the essentials in your back pocket at all times.

PH: How have you been promoting the series? It’s already creating a lot of buzz on social media!

Jay Chaudhry: You know, although we had a remarkable marketing and distribution plan, sometimes it’s equally if not better to let the content speak for itself and drive the traffic. In this case, the content definitely spoke and took off on its own. Within 24 hours of us dropping the trailer we saw shares on behalf of Adweek, the Athletic, Men’s Health, Sports Business Journal and featured on countless vegan lifestyle blogs

PH: Plant-based cooking is definitely becoming more popular. Why was it important to share this series with everyone?

Jay Chaudhry: There’s this notion out there, that in order for an athlete to perform at the highest professional level, the best source of protein has to come from meat. DJ is living proof that that is far from the truth.

Anyone who watches the show will be surprised at how much they could do with simple ingredients like tofu, mushrooms and bread. We’ve become so used to the textures and tastes of certain foods that we forget how easily our minds can change and adapt to try new things. 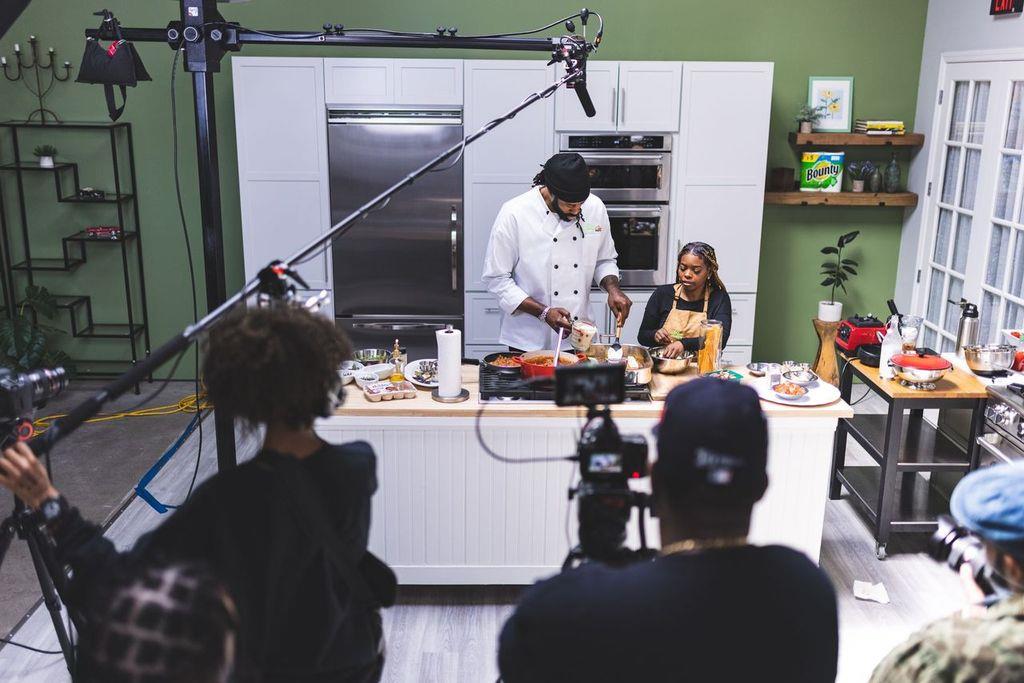 PH: What else do you have going on over at PlayersTV? What projects are you working on?

Jay Chaudhry: Although we’re still considered a start-up, we aren’t moving like one that’s for sure. Expect to see some incredible new athlete signings and partnerships this year. As for me, in between producing and directing original series, I’m also looking to expand our production roster both here in the East and West coast. Becoming an unmatched, in-house content factory with original creators is something I’ve envisioned here since the launch.

PlayersTV is an athlete-owned and culture-powered TV network and media company home to a diverse collection of original series, co-produced by athletes and brand partners. PlayersTV is the first and only athlete lifestyle network distributed across digital, linear, and OTT, reaching more than 165MM+ global households. More than 50 elite athletes are investors and creators in PlayersTV including DeAndre Jordan, Chris Paul, Kyrie Irving, Carmelo Anthony, Damian Lillard, A.J. Andrews, C.J. McCollum, Angel McCoughtry, Ken Griffey Jr, Trevor Bauer, Travis Kelce and Vernon Davis among others. PlayersTV is available on Samsung TV Plus, SLING TV, LG Channels, Vizio Smartcast, Roku, and Xumo TV (all devices). Visit us at www.playerstv.co and connect with us @PlayersTV.