How to Frame a Medium Shot Like a Master Cinematographer


Learn how to frame a Medium Shot the “Roger Deakins way” by learning the difference between a Medium Shot, Medium Long Shot, and Medium Close-Up.

Roger Deakins is one of the most acclaimed cinematographers in the film industry. He’s shot award-winning films for directors like Joel and Ethan Coen, Sam Mendes, Frank Darabont, and Ron Howard.

The medium shot is one of the standard camera angles used to frame a character. It’s the shot in-between a close-up and a long shot. In this breakdown, we examine Deakins’ various uses of the medium shot in his films.

In this medium shot, the audience’s focus is on James Bond, framed from the waist up. Image via Sony Pictures.

A medium shot frames a character from their waist up. It should be considered a personal shot, as it frames a character so it appears that the audience is in a conversation with them. If you were going to choose a lens for this type of shot, you’d most likely use something between a 35mm and 50mm. This should present an “eye like” view, with manageable lens compression, of your subjects, giving you that beautiful medium shot you want.

Think of it as a real-life conversation. When talking to another person, you’re either standing or sitting with them. Most often, you’re staring at them from the waist up. Even more common, you only notice their attributes from the chest up. You’re rarely paying attention to their feet or legs. This conversational framing is considered when deciding the medium shot.

At this level, it’s as if you’re having a conversation with Rooster Cogburn. Image via Paramount Pictures.

This is why the medium shot is often used in interviews. It’s a relatable angle that everyone is used to. On camera, a medium shot directs the viewer’s attention to a character.

Deakins often frames his medium shots from above the waist, closer to the belly button. This offers a better composition, as it avoids framing around an actor’s joints. Cutting off directly at the waist or elbows creates a jarring image. In each of these medium shots selected, you’ll see how Deakins frames just on the edge of the elbows, rather than in the middle of the elbow.

Not only is the audience on conversation-level with the actor, the chaos of the scene is still captured in the background. Image via Miramax.

The biggest takeaway from these medium shots is that they give the audience so much more information than just seeing a character. To properly frame a medium shot, you must pay attention to all of the surroundings and particular attention to the lighting. The medium shot should show off the scenery as much as the character. 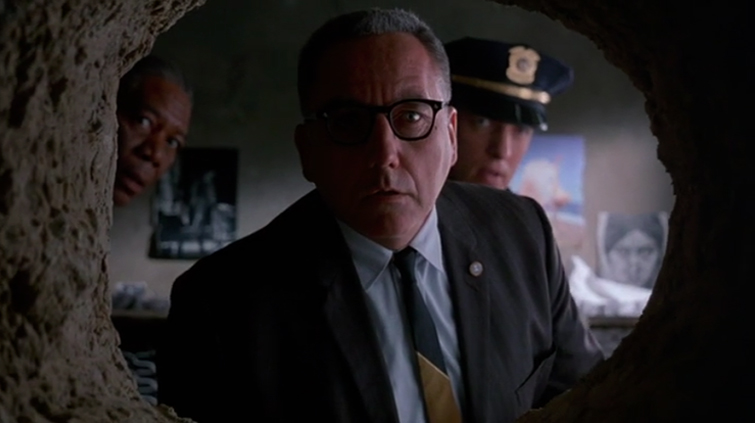 In this scene, the background is just at important to the moment as the looks on the characters’ faces. Image via Castle Rock Entertainment.

The above shots were chosen for a specific reason. Note how much information you get from the characters’ body. Unlike a close-up of just their face, you can see each of their shoulders slump in despair. Their body language offers so much more to the scene.

Pay attention to the little background details, as well. In the image from True Grit, we see that Rooster Cogburn is totally alone during his interrogation. Notice the balance of light in No Country for Old Men, where Ed Tom Bell is perfectly framed by the blue hues that contrast the other tungsten lights in the hotel.

The final medium shot from The Shawshank Redemption shows the escape route from the prison in the foreground, the shock of the warden, and the background reactions of the officer and Red. Even farther back, we can still see the other posters on the cell wall, which helped draw attention away from the Rita Hayworth poster that was secretly hiding an escape route.

This medium long shot shows James Bond, yet places the emphasis on his location. Image via Sony Pictures.

The medium long shot frames the subject from the knees up, and is often focusing on the location rather than the character. Just like with the medium shot composition, avoid framing on the joints — in this case, the knees. Notice how Deakins typically frames from just below the knee.

The shot is also called a three-quarters shot — which, obviously, frames three-quarters of the character. The medium long shot is typically used as an establishing shot, as it shows a character in relation to their surroundings.

Using only a silhouette of the character places the focus on the background. Image via Warner Bros.

Roger Deakins will often use the medium long shot as an establishing shot, putting the focus on the background rather than the character. Notice the medium long shots from The Assassination of Jesse James by the Coward Robert Ford, and the below image from Skyfall, only use a silhouette of the character to draw your attention to the landscape. Now, since this is a longer shot, expect to use a longer focal length, something like an 85mm or higher.

The audience’s focal point will be on what the character is viewing, as well. Image via Sony Pictures. 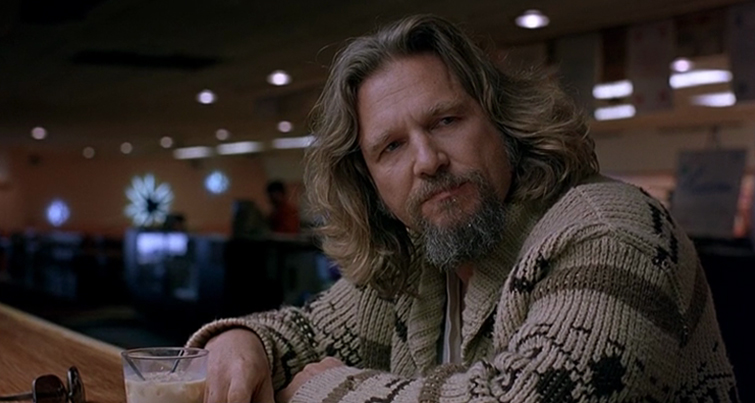 In this medium close-up shot, the audience is focusing their attention on The Dude, not necessarily the background. Image via Working Title Films. 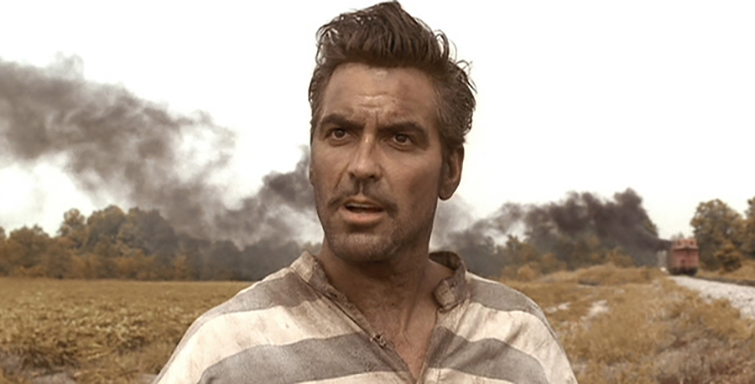 The out of focus background draws the focus to the character’s facial expressions. Image via Touchstone Pictures.

The emphasis is on the character’s facial expressions, but their body language should complement the overall composition. The same goes for backgrounds. The background is not the focus of the shot, it’s literally out of focus every time.

The medium close-up is perfect for a reaction shot. It gives a great range of emotion, just like Everett’s reaction in the O Brother, Where Art Thou? shot above. Note that the background is not the focus. We see the train in the distance, but it’s used to complement his reaction to the situation. 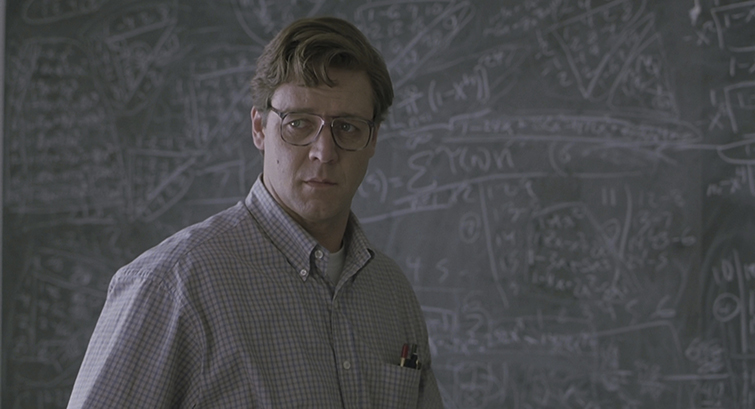 In this close-up, the character’s emotional state is intended as the main focal point. Image via Universal Pictures.

The medium close-up can be very intimate, like the above image from A Beautiful Mind. We can see the total despair and confusion in John Nash’s eyes and slumped body. Notice how the frame includes part of his chest pocket. Just like avoiding joints, be sure to check the costume’s framing, as well.

The medium close-up can also feature an array of characters, like the below shot from O Brother, Where Art Thou? Each character is framed from just below the chest, capturing multiple reactions simultaneously.

This close-up allows the audience insight into each character’s emotional response to the situation at hand. Image via Touchstone Pictures.

How Deakins Lights His Medium Shots

On top of framing his subjects in a particular way, there’s also consistency with how Deakins chooses to light these compositions. There are two ways we’re going to discuss today — the cove light and the ring light. With the cove light, Deakins wraps 180 degree unbleached muslin, creating a giant diffused source angled down toward the actors. Rubidium Wu, over at the Crimson Engine, has made a video breaking down exactly how he does it and how you can, too:

Then, there’s the coveted ring light. One of the most famous lights in Hollywood, Deakins loves busting out varieties of this light across all sizes and strengths for his films. The light construction is simple — it’s just a wooden circle with tungsten bulbs rigged all the way around. Todd Blankenship, from Shutterstock Tutorials, made one of the best DIY builds of this rig yet. It’s simple, cheap, and will get you one of the iconic Deakins shots:

With every aspect of filmmaking, framing your actors and subjects is all relative to the story and how you decide to tell it. Just because Deakins frames his actors in certain ways doesn’t mean it’s the only right way to do it. Try different shots and don’t be afraid to experiment! Understanding how Roger Deakins frames a medium shot is just the first step in learning how composition can affect and enhance the story you’re telling.

Not only is Roger Deakins a wonderful inspiration, he’s also a very active member of the filmmaking community. You can study more from him at his website RogerDeakins.com. Additionally, Deakins recently launched a new podcast where he dives into his work and collaborations. This thing is an absolute gold mine.

Keep exploring the world of cinematography with these inspiring articles: