Jeriana, who also received an Emmy nomination for her work on the show, considers Halston a passion project of hers and expanded her costume design knowledge and talent into being a consultant on the show. She worked alongside Ewan McGregor to really get him into the role of playing Halston and into the mindset of a designer.

Jeriana was tasked with not only recreating Halston’s incredible design collections, but also the stylish wardrobe for the real-life characters including Halston himself and his entourage of iconic figures such as Liza Minnelli, Elsa Peretti and Joel Schumacher. Her award-worthy work on the series ranges from modern ultrasuede looks to extensive and elaborate hand-made tie dye prints.

PH: Hi Jeriana! Can you share a bit about how you got into the industry, and more specifically what drew you to costume design?

Jeriana San Juan: I was always very close to my abuela growing up who was a dressmaker, and my mother’s  partner who was a ballerina for the Joffrey ballet. Surrounded by clothing, music, culture and dance I had a very supportive environment to pursue my passion of expressing mood, style, and story through clothing.

PH: Can you share some of your influences? Who’s your ultimate style icon?

Jeriana San Juan: It’s hard to pinpoint my influences, as anything can be inspiring and move my imagination from a modern dance performance at BAM to a Michel Gondry movie even just walking the streets of New York. Style Icons are many, but for me personally likely somewhere between Katherine Hepburn, David Bowie, and Leslie Caron.

PH: In your opinion—what’s one of the most iconic costume designs from any film—and why?

Jeriana San Juan: I have respect and admiration for so many films and TV shows for how the costume design was imperative to the production’s overall impact, it’s hard to pick just one!

PH: How did you become involved with Halston? What stood out to you?

Jeriana San Juan: What stood out to me was that Halston had a simplicity in his design that was actually quite nuanced and complex when it’s unpacked and understood fully. One of the most incredible things about his artistry as a designer was his ability to create fashion that not only stood out at the time, but that remains fashionable and classic in a timeless way. His designs are still relevant today, so it was an interesting challenge to set the stage visually and help the audience understand how forward thinking he was as a designer.

PH: What did the research for this undertaking look like? How did you prepare?

Jeriana San Juan: I left no stone unturned when doing this research. I prepared by studying archives from the press including Vogue and Women’s Wear Daily, as well as studying his pieces through private collections and at museums. I spoke with many of his close friends and even read literature studying the designs of some of his influences and mentors. It was important to set the stage for the fashion world by studying all the major influences through the periods that our show would be involved with. I looked at everything from famous fashion designers, to influential textile design, and even the music that was playing on the radio. I think it all helped to create a fully realized mood and palette as the show tracks his life through different decades. 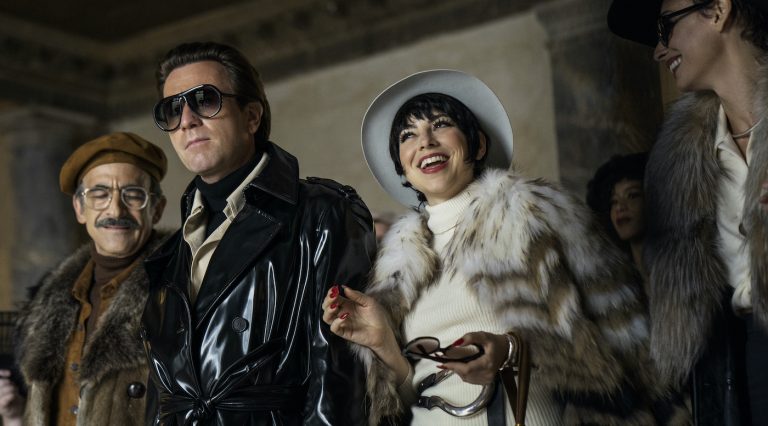 PH: Can you share some unique, minor details to the costumes that viewers might not notice, or understand?

Jeriana San Juan: I always pay attention to the finishing details in all the costumes, even the linings and the way that garments are finished on the inside. Especially for a show like this, I wanted Ewan to feel an elegance and fine finish in the same clothes that Halston would have worn. I also wanted textiles that are fine and rare for him such as double face mohair for a coat or an elegant crepe for trousers. It was important for me to have Ewan experience really nice fabrics for his character.

PH: Did you face any challenges while designing? How did you remedy those?

Jeriana San Juan: Movement is very important in his clothes. They were made to be danced in, so in every fitting I would have the actors and models twirl and dance. It was a challenge to give the pieces that were designed as Halston a lighter feel and look than the rest of the costumes, so I would experiment with fabrics in order to find a balance in textiles that would withstand production demands but still move and feel fresh and airy on screen.

PH: Throughout the years, do you have any favorite costumes you’ve developed? Can you share why?

Jeriana San Juan: One of my favorite costumes has been a suit for Yahya Abdul Mateen as Cadillac in The Get Down. In working with Baz Luhrmann, he really pushes you to discover the character in every detail, and that is a lesson I will keep with me forever. I found the wrong side to a piece of brocade that spoke to me so specifically for a moment when this gangster was going to arrive at a club dressed to impress. The wrong side had bits of gold that shined just right inlaid into a subtle snake pattern in shades of cream. The textile ended up being a nightmare to work with but the payoff of seeing the actor inhabit the costume was electrifying.

PH: Finish this sentence…to be a great costume designer, you need to…

PH: What are some other things/projects you’re looking forward to in 2022?

Jeriana San Juan: I just finished an action film which was new for me. It was just as complex to design costumes that can do insane stunts in multiples for doubles and damage as it is to do costumes for dance.

I am looking forward to doing other projects that feel new and bring interesting challenges. I am  also in the process of creating a podcast that I’ve been working on since the start of the pandemic.