Need to write a script with little to no budget? Here are some great, free alternatives to the high-priced Hollywood standards.

I’m sure you’ve had the same thought I have, sitting alone in your house with absolutely no creative outlets as we wait out this pandemic: “I should write a screenplay.” Well, the good news is you’ve definitely got the time on your hands. But, with everyone watching their wallets as this season unfolds, it’s good to save money however you can. So, what are your options for screenwriting software?

Final Draft is the darling of the film industry, used by almost every professional screenwriter in the industry. Final Draft has many wonderful features that help get you from concept to a final draft. The program creates fast character and scene reports so your first AD and line producers can start building budgets and schedules. But, when you’re starting out as a starving screenwriter, you might not be able to afford it with all its bells and whistles. You need something cheap. You need something free!

For a while, my go-to was Celtx. However, as time has passed, they’ve restricted many of the features they use to provide for free. It’s browser-based, and it only allows you to write up to three projects (including ones you trash). The browser version is still good, featuring a decent character catalog system and other necessary features. However, I wanted to see if there were any fully free script writing applications on the web that don’t limit you. Here’s what I found.

Arc Studio recently went free for everyone — due to the current climate. This is a great deal for you, and it’s probably my favorite screenwriting tool currently available. Arc Studio is sleek, modern, and free of clunky tools and confusing UI problems. It’s got just about everything (and more) to get a story from a one-sentence log line to a full-fledged final draft.

The software comes with digital note cards, which you can fill with outlines for scenes, details for characters, and beats for the entire screenplay. One of my favorite features is Arc Mode, which brings you to a full-page timeline of your story’s beats. From here, you can drag the beats around to see what will create the most interesting timeline.

Arc Studio Pro will most likely return to being a paid application sometime in the future, but while it’s free, I highly recommend you check it out.

Fountain isn’t even a program. It’s a very basic set of rules you can incorporate into any standard Word Processor, whether it’s Notepad, Microsoft Word, Google Docs, etc. It’ll take a bit to learn, but it’s free. Once you’re done writing, you just pass your document through a growing list of Fountain-supported apps that’ll then do all the industry standard formatting for you. And yes, several of those apps are free. 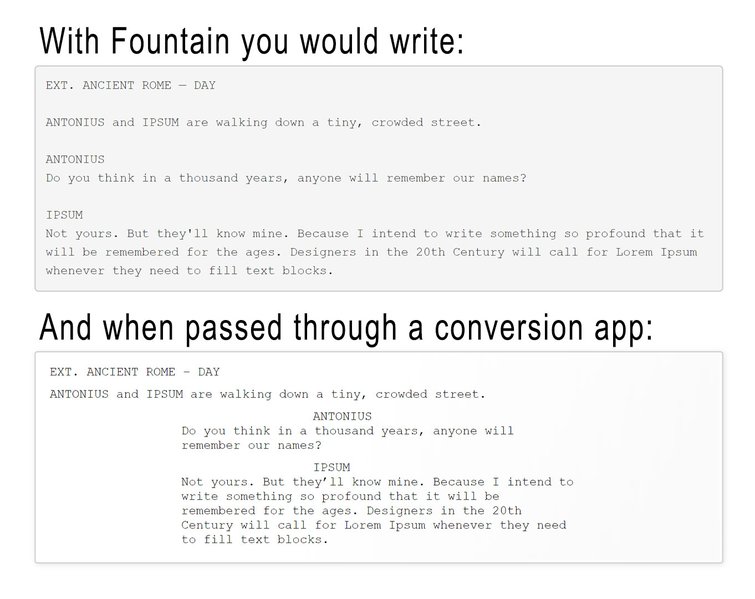 The Fountain-supported apps help with all your industry-standard formatting, and many are free. Images via fountain.io.

This is great because you can write a whole screenplay on your phone’s text app, as long as you follow the Fountain syntax rules. And, through some of the supported Fountain apps, you can even convert it to a Final Draft file. But, Final Draft will not directly import Fountain, so you’ll need to pass it through a conversion app. However, the programs listed below do import Fountain and can even export to it for switching between programs.

In a way, Trelby is a step up from Fountain. It’s a full-fledged program you can download for free. It’s also open-source, so if you’re a developer, you can get into the code and modify it as you please.

Trelby is only available for Windows and Linux, so it’s a no-go for iOS (any Mac users can just skip ahead to the next program overview). Keep in mind, Trelby is extremely basic. Want to write a script? Here you go. It’s got some great features, allows for decent customization of margins and what the Tab and Enter keys do, and you can change the colors of the interface. 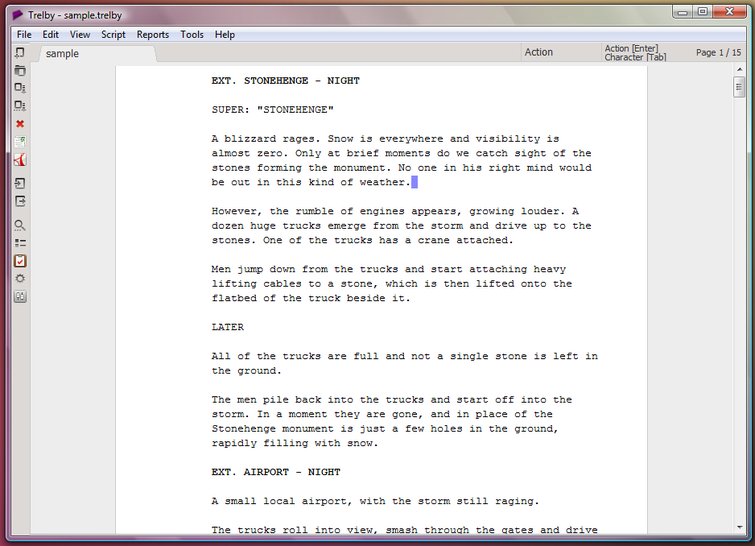 Trelby is open-source, has great basic features, and is free. Image via trelby.org

A negative of the program is that whenever you add (V.O.), it counts it as a new character in the reports. But, a positive is that the PDF export contains bookmarks for each scene heading. Plus, along with exporting to Fountain, you can export to Final Draft XML. 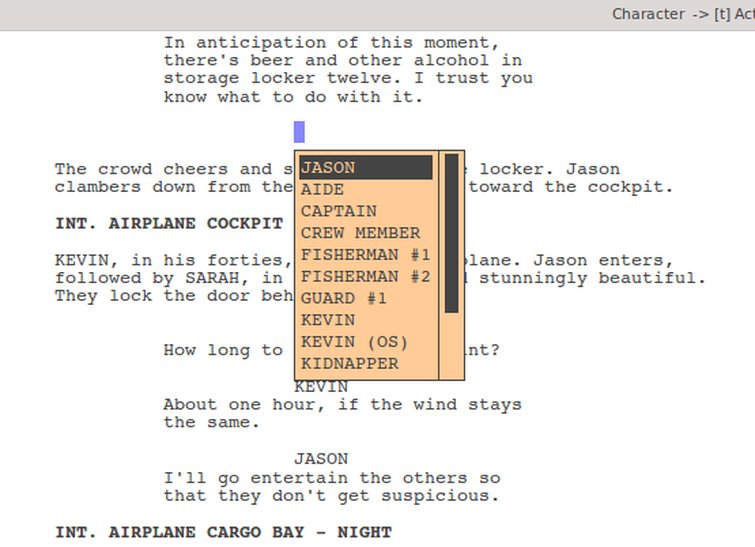 This straightforward program helps you write and export your script. Image via trelby.org

All in all, it’s pretty straightforward. Open the app, write your script, export. There are no bells and whistles with Trelby.

Kit Scenarist is pretty awesome. For being completely free, it’s very versatile, and it’s constantly getting updates. You can download the most current Beta Test version or simply opt for the last, most-stable update.

You can export for Final Draft, which is a plus if you’re going to be working with a crew who uses it. It also exports to Word DOCX and PDF, of course. The program offers several different script formats, depending on your region. It includes Hebrew, Chinese, and Russian script formats, along with the default Hollywood standard. 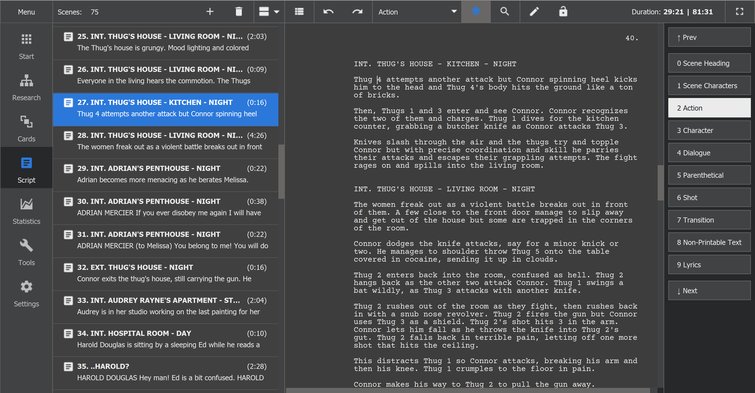 A nice feature is that up in the right-hand corner, there’s a clock that gives you an estimate of the duration of your screenplay. Depending on where your cursor is, it also shows how many minutes into the film you are. Of course, this clock is an approximation based on sixty seconds a page (which you can adjust in the settings), but it creates a nice sense of accomplishment as you write. 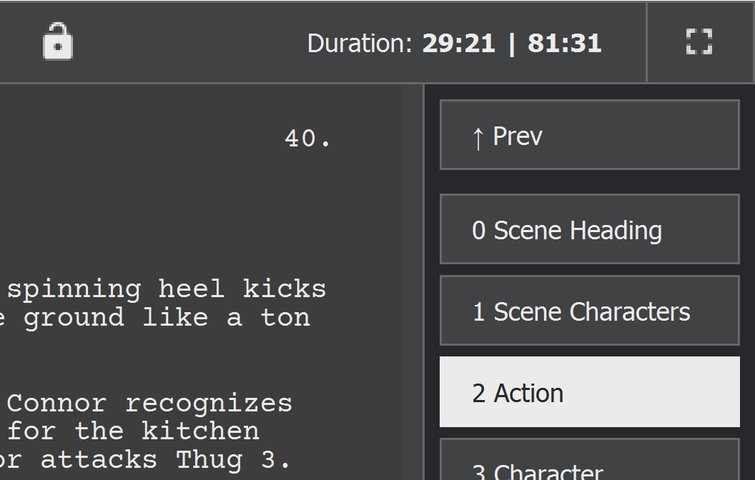 The clock feature will keep track of the duration of your screenplay.

Additionally, this feature extends to the scene Table of Contents on the left. There, you can see estimates of how long each scene will be. I love this feature because it really helps me pace my scripts, so I can decide if a scene should be longer or shorter. 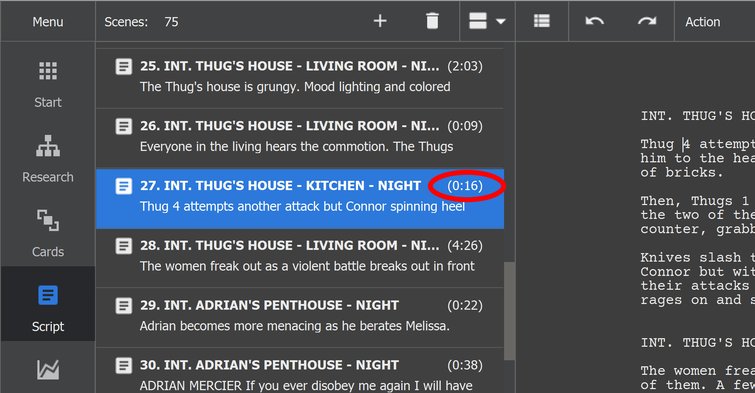 The clock will calculate the duration of each scene, which helps with the pacing of your script.

While it’s free, you can pay for dedicated cloud storage and buy a mobile version for your phone (available on both Android and iOS). Through the cloud storage, you can sync your script between your desktop and your mobile device. However, you don’t have to register to download the free version.

A negative is that the program is still in the works, so you may run into some issues here and there as the developer refines the code. Be sure to save your work often and download the updates when prompted.

Overall, I really like this program because of how intuitive it feels. If you’ve ever written a film script before, you’ll easily pick up this program in just a few minutes. There are plenty of great features to explore — too many to list here. Definitely check it out!

Drama Queen, while being a relatively hidden software, is actually one of your best bets for a completely free screenwriting program. It’s got more features than Celtx’s free version, and it’s a great tool to have for a budget writer. It’s got everything you need to write a screenplay, such as automatic tab indenting and formatting — along with some features such as a Smart Import tool to help you import scripts from other programs, and a drag-and-drop navigator that allows you to swap your scenes without copying and pasting.

If you’re looking for a free, all-in-one screenwriting service that you can use offline, Drama Queen could be your solution.

These are just a few options for free screenwriting software. If you decide to purchase a full-fledged, script writing program, you don’t have to limit yourself to Final Draft. But, I hope these options help you as you’re starting out. At the end of the day, what matters most is the screenplay itself. No program can compensate for poor writing. Be sure to keep practicing, refining your art, and reading other scripts to sharpen your skills.

Looking for more tips on script writing? Check these out.