Jonathan Wales, the award-winning supervising sound editor and re-recording mixer on Netflix’s Midnight Mass, has worked on several notable projects including Get Out and Netflix’s The Haunting of Hill House, has another show from the creator of Midnight Mass. Through sound and music, Jonathan and his team take viewers on an emotional journey throughout this popular Netflix limited series.

Midnight Mass centers around an isolated island community that experiences miraculous events and frightening omens after the arrival of a charismatic, mysterious young priest. Jonathan brought this desolate island to life sonically with meticulous attention to detail. The vast emptiness of the island lends itself to a subtle sonic landscape, leaving little room for error or unintentional sound choices. His team went to the lengths of creating a geographical map of the island to maintain consistency with the volume of the surrounding ocean and other sounds depending on the location.

We spoke exclusively to Jonathan about his work on the show.

PH: Hi Jonathan! I hope you’re well! First, let’s get to know you a little better. How long have you been in the industry? Did you always know you wanted to work in sound?

Jonathan Wales: I actually started in the music business producing records back in the UK in the early 1990s. As a longtime musician and just loving the process of creating sonic art, I was progressively drawn to work on movies early on and gradually made the transition in the mid 1990s

PH: What has your journey as a sound editor and re-recording mixer been like?

Jonathan Wales: I have always enjoyed approaching sound from a viewpoint of storytelling and possibilities. How can we best communicate with the audience, and how can we use our soundscape to elevate the storytelling beyond what’s simply there. I was fortunate (or unfortunate) to have literally grown up with the technology we now use as it was being developed. So I have been using ProTools and Logic since they were invented. From a very early stage in my career, because I knew my way around the tech, I started to blur the lines between editing and mixing on the stage. We’d try to keep things live as long as possible back then, so we could tweak and have as much creative possibility for as long as possible. Also, early on, music was way in front of film in terms of mixing tech. So I was able to bring some of the music vibe and apply it to what was going on with the film mixing which was really fun.

PH: Can you share some of the lessons you’ve learned from past projects?

Jonathan Wales: Every project you learn something new. Literally. Doesn’t matter how old or how long you’ve been doing this. I think that’s what makes it so exciting and constantly interesting. One of my main takeaways has always been to try to not psych yourself out that something is a bad idea. It’s so easy to argue from a point of logic against doing something either because it’s hard and you think it wont work, or just because you’re not really feeling it. But honestly those are the best times to just let go and give it a try. Those are the times when something really surprising will happen. 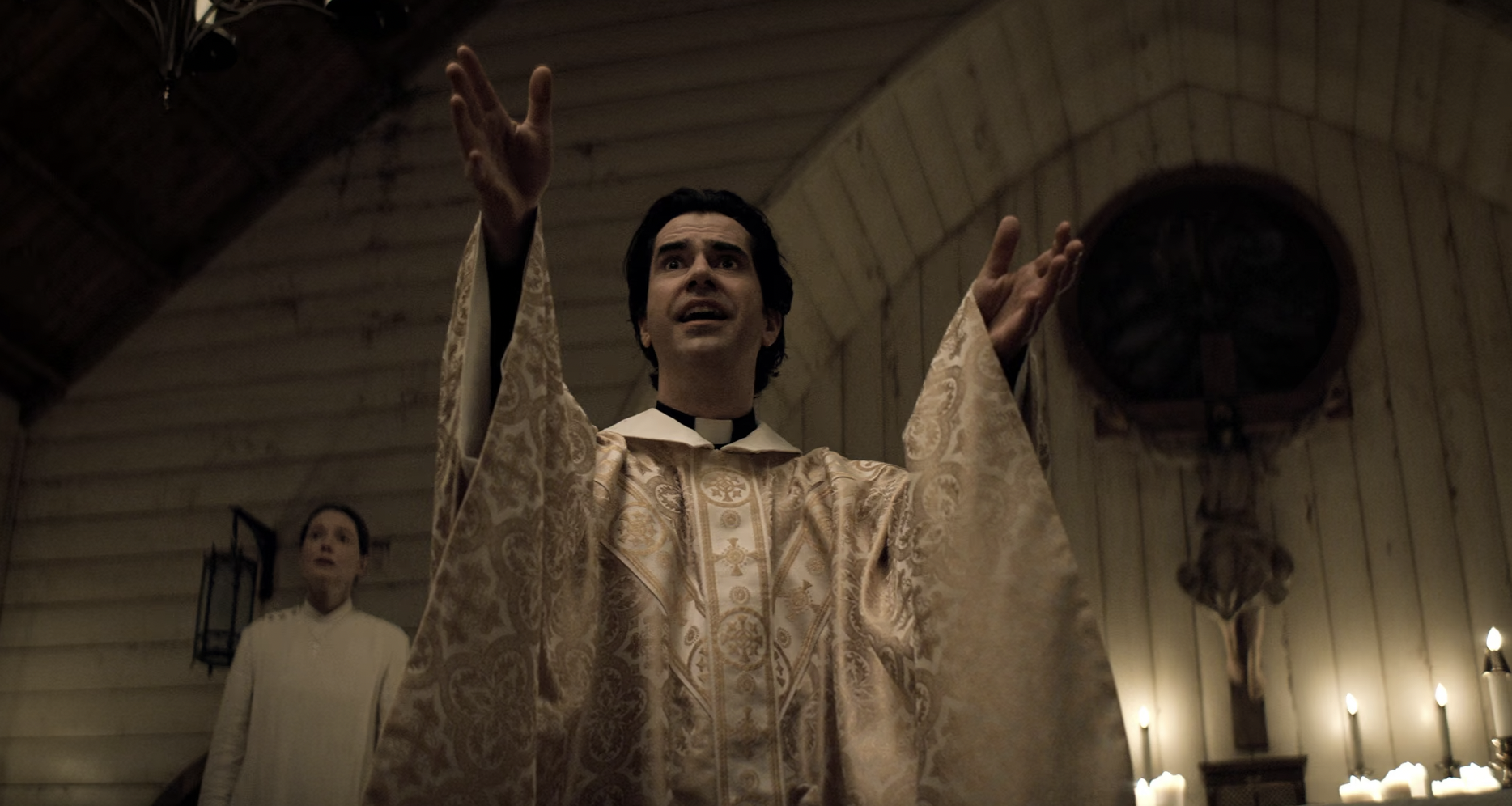 PH: Your latest project is Netflix’s Midnight Mass—how did you get involved/hear about the project?

Jonathan Wales: I’ve been fortunate to work with Mike Flanagan and Trevor Macy since Hush and ever since then I’ve been so excited to get to work on Midnight Mass. It’s been hanging around in Mike’s head for so long. Even in Hush the protagonist is an author, and the book she’s writing IS Midnight Mass. So it’s not every day you get to have those kinds of connections in your work.

PH: Is it safe to say you’re fond of the thriller/horror genre? Sound obviously plays such an important role in that genre. How do you always reinvent yourself?

Jonathan Wales: I think it’s very true to say that sound is a big part of the horror genre. It’s one where we get to literally play (or prey) on the audience’s senses more than most. It’s really fun to watch something with people who’ve never seen it before and you’re just looking to clock their reactions to what you know is coming up. Historically though, I also think that as a mixer you tend to become known for the things you do early on that become successful. I definitely think that was part of it for me.  And in sound we love to play around and make things cool. For that, the genres with the most to play around with are obviously Horror and Sci-FI – and there’s a LOT more horror that gets made.

PH: For Midnight Mass, what was your process like to generate sounds of the island, and even the music within the series?

Jonathan Wales: I was working with my co-supervisor Trevor Gates and his team, and right from the beginning we wanted to make sure that the audience really got the vibe of the island. So we had a map from Mike Flanagan which literally laid out where the different locations were in relation to each other, especially in relation to the coastline. For instance, there are no ocean sounds or gulls when you’re at the church or the school. Being really tight with those differences made it very interesting depending on where you were. We also wanted to make sure that we communicated that the island is dying. Everyone is gradually leaving. Nobody ever comes to this Island. Originally we had built up a bunch of activity in the main street, and we had to strip it away because it actually felt too appealing.

The music was extremely complicated because it involved using both cast members and professional singers to create a seamless result that the audience would really buy into. It was essential to make it believable all the way along. We used a huge number of individual recordings, and we worked very closely with the cast recordings as well to maintain absolute authenticity and to augment and make everything consistent. From a standpoint of score – it was a very experimental process that led to the end result. I would work very closely with Brett “Snacky” Pierce, the music editor, and with The Newton Brothers, the composers, to refine the score so that it was really working for Mike. Sometimes we’d try things, and they totally didn’t work. Other times, we’d do something we were worried wasn’t that good and then Mike would just love it. It really was an evolution, drilling down to the essence of how the music could best help the really complicated knife-edge feeling that we needed for the show.

PH: There must be an extreme amount of detail involved. How do you make sure sound is consistent throughout the series?

Jonathan Wales: I work very hard in the mix to remain consistent so that environments feel the same to the audience throughout. However, we’re also changing them for effect. So sometimes we would intentionally be more sparse and at other times we might want it to feel a bit more intense. Those changes are done based on what will best support the story at that time. Then on top we’re layering a lot of small little things. That is something which is really fun to do in Atmos because there is so much possibility for placement. The real world is made up of thousands of really small things working together, and making a soundtrack like this is basically just recreating that, a few small little things at a time.

PH: Do you have a favorite sequence you can share, and why is it your favorite?

Jonathan Wales: I just think episode 6 is amazing in every way, and I’m super proud of it. It was very hard to do, but emotionally and in every way as a piece of movie-making it’s just incredible.

PH: For the music, COVID made things a bit tricky as well. What was the studio process like with singers and how did you weave the voices together?

Jonathan Wales: Thanks to COVID there really wasn’t a studio process with the singers at all. We had originally planned to have one, but it just wasn’t possible. So instead we prepared tracks for singers to use, and then ended up having the individual singers sing against those tracks in their own homes, and send us the tracks one at a time! Then Snacky, the music editor, would take all of those and time them together, fix all the little (and not so little) issues one track at a time and then give them to me so I could piece them together into something that sounded like they were actually all singing together in the environment. A ton of work, but in the end it worked out really well and we had even more control of everything because of working that way. I am really proud of the results we were able to achieve.

PH: Both Get Out and The Haunting of Hill House are known for the music—and lack thereof—at times. Can you briefly describe what it was like working on those projects?

Jonathan Wales: Those projects were really special because you kinda knew while you were working on them that they were something fresh and great. Problem is, that just makes it even more scary to not screw it up! Jordan allowed us a lot of freedom to experiment on Get Out and then he would listen to what we’d done. We drilled into what was working, and it was an incredible process because he’s just such an amazing director in terms of his clarity of vision. In both cases, the music hinges on a knife-edge. If you go too far, then it doesn’t work. But you need it to really support the emotion and the action when required. For The Haunting of Hill House, we actually mixed with a lot more music and then Mike would go through and remove cues that weren’t necessary. It was sort of a real process of elimination to get to what was really important. So I’d mix each episode entirely without music, and then we’d add the music, play it back, and remove what wasn’t working.

PH: What is one of your favorite things about coming to work?

Jonathan Wales: Literally I get to work on amazing projects with amazing people – and every couple of months it’s something completely different. It’s really inspiring, and I know I’m just super lucky to get to do it.

PH: Lastly, (if you can discuss) what exciting things are you looking forward to in 2022?

Jonathan Wales: Well I have recently mixed The Black Phone with Scott Derrickson and that movie is really special – coming out later in 2022. I am also currently working on some other amazing projects with Mike Flanagan and Trevor Macy – so you have to wait for those to come. It’s gonna be a really busy year!