Except for 2016, we’ve had a new iteration of Resolve every year for nearly a decade. Version 12 made it a true contender in the field of NLEs. Version 14 brought in the Fairlight page as Blackmagic had acquired Fairlight in the same year. Version 15 gave us the Fusion page. And in Version 16, Blackmagic introduced the cut page—a page for fast and simple editing. Outside of an illustration or design page—which, at the time of writing this intro, I don’t see being included—you can pretty much accomplish all post-production stages in Resolve. From editing, VFX, and sound mixing, there’s no need to move off software.

Let’s see what’s new in Version 17. It should be noted that I’ll be specifically highlighting the main new features in the color page and edit page. Last year, Grant Petty stated that many different creatives are using Resolve, from the editor to the sound mixer to the colorist, and then to the VFX artist. Resolve hosts so many unique pages that there’s no regular user of the software. But, as I’m a certified editing trainer and a firm enthusiast of color grading, I can put more weight on those areas than Fusion and Fairlight. However, any other exciting highlights will be briefed toward the bottom.

For the first time in several years, there are no new page additions to Resolve, as expected. Still, Blackmagic founder Grant Petty stated that this is an excessively big update, with hundreds of clean-ups and several powerful new features.

Right off the presentation bat, we’re introduced to a brand new set of color wheels for HDR (High Dynamic Range) grading. With the increase of consumer-priced HDR screens and the rise of prosumer cameras that allow for HDR recording from 13-19 stops, it was only a matter of time before we had a tool that specifically focused on wide latitude media. 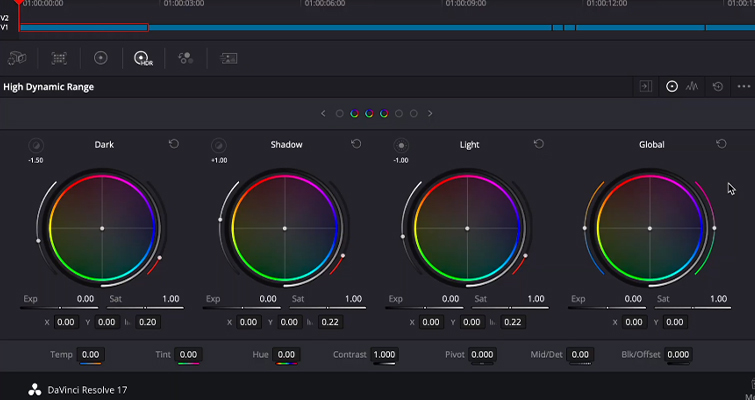 The new pallet splits the image into overlapping tonal rages (six in total: dark, shadow, light, highlight, specular, and global), so you can make adjustments across multiple stops of light, opposed to the locked off shadows, midtones, and highlights region. You can even adjust where these regions stop and start in the new HDR zones panel, as the zones panel has a graph representing the range of stops, and you can adjust the zones to accommodate your image.

Additionally, the new HDR pallet has new sliders alongside the color wheels. There’s a color temperature and tint slider by the wheel’s side, and a saturation and exposure slider under the wheel. This is a welcome visual change against the numeric input adjustments we had prior. It should also be noted that the temp, tint, contrast, and other tools that were split between two pages have been moved above the color wheels in the standard color wheels pallet. So, there’s no longer any need in swapping to page one or two.

Brand new to Resolve, the color warper is a mesh-based warping tool that allows for adjustments of color and luminance, simultaneously. To some extent, this is an improved, and perhaps more three-dimensional, version of a number of the HSL curves. Still, the new color warper goes even further, allowing you to set a hue vs. hue color grade for specific saturations. 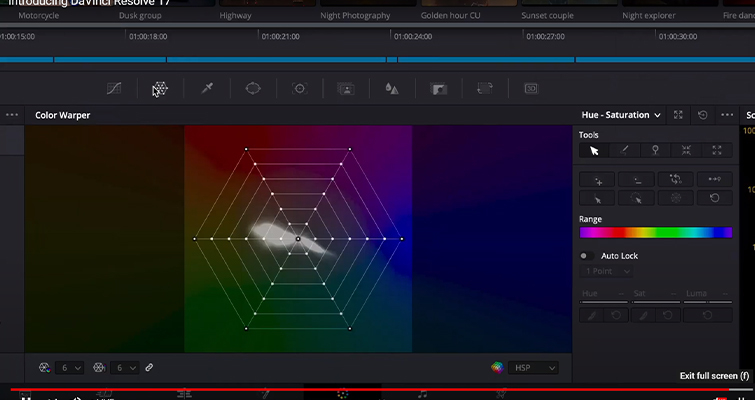 The color warper simultaneously allows for adjustments in color and luminance.

Adjustments are made by dragging control points and these have a falloff for natural-looking adjustments. An interactive 3D mesh allows you to lock off specific luminance regions affecting the information from the adjacent areas. As noted, while it seems very similar to HSL curves, it allows for a lot more specific tonal and hue adjustments over the HSL curve, especially for HDR media.

This can also be undocked and resized for better window control.

DaVinci Resolve 17 has also improved color management to simplify your workflow. In Resolve 17, you get wide gamut image processing with new input and output tone mapping, which provides a more uniform response while grading.

A new feature that I can already see myself using a lot is the Magic Mask. It’s a neural powered secondary grading tool that automatically creates masks on people (or features such as hands or arms) for automatic secondary grading. From the presentation, the way that you select the person is anything unlike I’ve seen before. Even in After Effects, that has a pretty power isolation tool, you still need to paint a person’s shape to a degree. In Resolve 17, it’s nothing more than a stroke on the neural engine’s subject to take control and isolate the subject. This has just made nights of tedious power windows redundant. 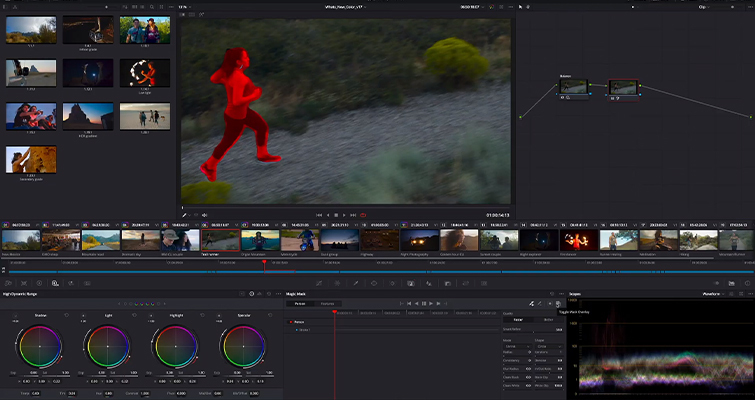 The Magic Mask automatically creates a mask on your subject.

The GPU-powered scopes have also received several new updates. The GPU scopes feature an expanded 3×3 view to display identical scopes, but with unique parameters to allow you to focus on specific areas of the image, without the need to change the settings of a specific scope continually. 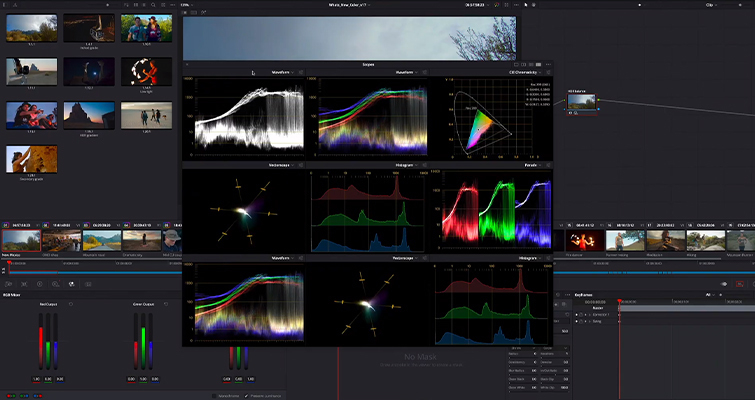 With the GPU-powered scopes, you can focus on specific areas of an image, without continually changing the settings of a specific scope.

A highly requested feature that’s also been introduced is the ability to drag a floating window into a monitor. Sometimes undocking the scopes and expanding them makes the UI a little too cramped on a smaller monitor.

While there are no new major overhauls with the edit page, there are several new tools and additions. First, let’s talk about a well-welcomed addition that Adobe Premiere Pro saw last year—the smart reframe for social delivery.

Almost every edit job I’ve had in the last year has needed either a 1×1 cut for Instagram or a 9:16 cut for Instagram and Facebook Stories. The problem is that within Resolve, you had to manually adjust the picture to align the subject within the new composition parameters correctly. With Smart Reframe, the neural engine will automatically find the subject and softly keyframe the position to keep them centered. 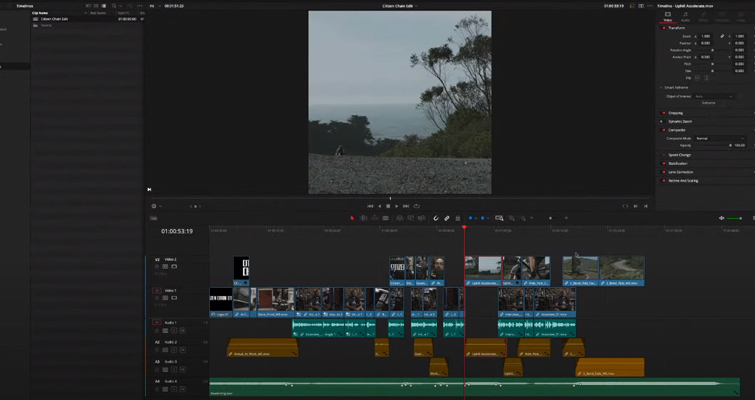 Smart Reframe will find your subject, then keyframe the position to keep it centered.

Source adjustments allow you to change a clip before you’ve even edited it into the timeline. For example, you could apply a LUT, adjust the audio tracks, manipulate the RAW controls, and interpret FPS before you’ve added it to a timeline.

Live Preview of Effects and Transitions

Sometimes, you don’t realize how badly you needed them with updates until they’re presented to you. A live preview of effects and transitions are wholly welcome. What do these do? Well, previously, to see the effect applied to the media, you’d have to drag the effect or transition from the “Effects” panel to the selected clip. Now, just like live scrubbing, you hover over the effect and shift your mouse forward and backward to see the effect employed. 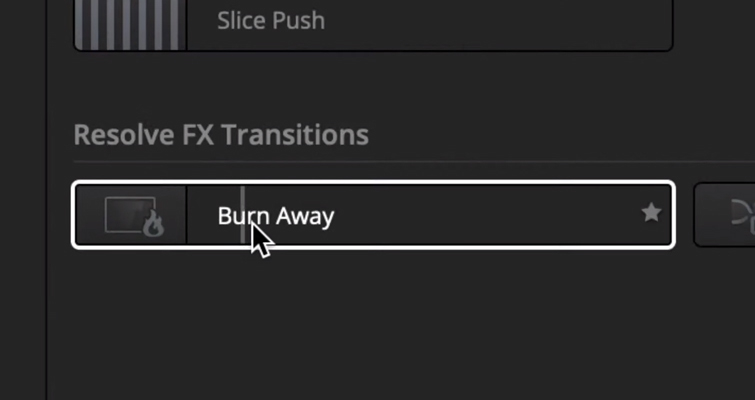 The transition preview provides live previews of your effects and transitions.

Additionally, it should be noted that there are several new transitions and effects added to Resolve 17, such as the transform effect, which allows you to skew and corner pin text and shapes. While I love Resolve with all my heart, I still use After Effects for all compositing work. However, shifting from After Effects to Resolve for simple text skewing will be a welcome change. 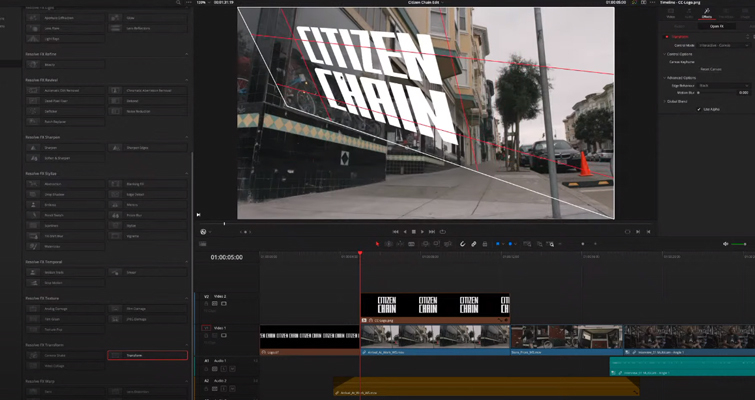 There are also improvements to the object removal, dead pixel fixer, dust buster, blur, and film grain plugins. All Resolve FX can be animated using the new unified inspector on the cut, edit, and Fusion pages!

Like the social reframing tool, having video collages and picture-in-pictures has become necessary for many online content—especially tutorials. The collage plugin is the perfect tool for this. It has several built-in presets for quick animations, allowing you to add multiple windows to your edit quickly. 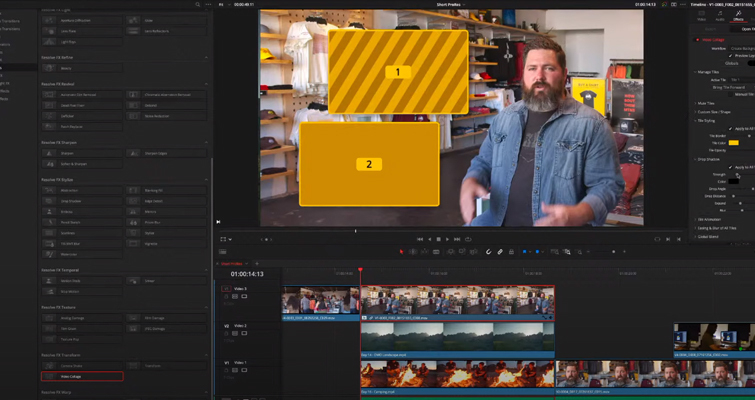 Add multiple windows to your video with the collage plugin.

As an editor, and as someone who has grown up on After Effects, the fusion page is still an area of no entry. Therefore, being able to key footage on the edit page without even opening the “Fusion of Color” tab is convenient. New Resolve FX 3D, HSL, and luma keyer plugins let you pull keys directly in the timeline on both the edit and cut pages! Also, alpha channels from Resolve FX and Open FX plugins are now supported, as are embedded alpha channels and external matte files, giving you even more compositing options!

DaVinci Resolve 17 features incredibly useful timeline management and organization tools. You can disable unused timelines without deleting them. This removes them from the viewer’s timeline drop-down menu, which can now be organized alphabetically, by creation date, or in order of recent use.

Perhaps an expected addition, but one I didn’t think of, is live multi-user collaboration. The new feature allows editors, colorists, and VFX artists to work on the same timeline at once. The timeline and project are tied together with a powerful multi-user database and a universal timeline.

Now, I know you might think: a) what if people start touching my clips or media when I’m using them, and b) how do we converse outside of an external and extrusive chat software like Slack? For the latter, Resolve now has an internal chat system that allows all editors to speak to each other like any other social media messenger. 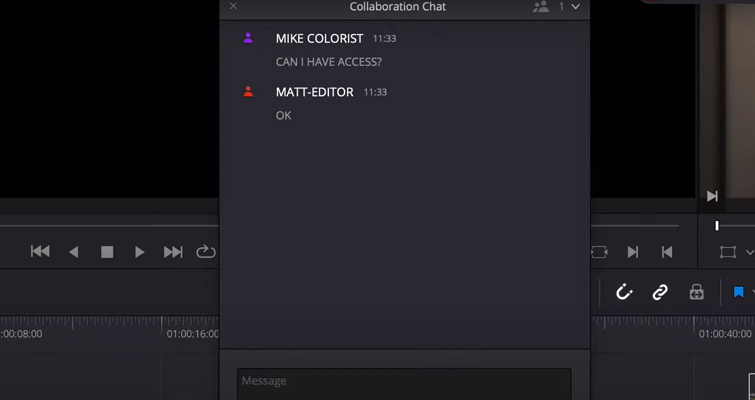 Resolve’s internal chat system allows editors to speak to each other, much like any social media messenger.

Additionally, if you’ve added items to a bin, and you need those clips to remain in the said bin until you’ve finished your job, you can lock the bin, and the other editors can see the folder restriction on their screen. While editing, the timeline will be locked, and the additional team members can then view the new change by selecting the refresh button. Resolve will even inform you when an editor is on the timeline, as the playhead will be grayed out. There are shared markers, comparison tools, and more. This will be a feature we delve more into in the future, for sure.

With the pandemic still active across the globe, we haven’t seen many trade shows take place this year—like NAB or IBC. Thus, there was a lot to be introduced in this presentation. I woefully misinterpreted how many new tools would be introduced, including new features on the Cut page, Fusion page, and Fairlight page. For more info, check out Blackmagic’s information page.

And, of course, we cannot gloss over the newly introduced Speed Editor keyboard. However, instead of running over the details presented, we’ll return shortly with a fully-fledged review.